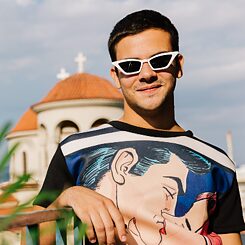 © Thanos Papadogiannis Thanos Papadogiannis is an Athens-based non-binary artist and activist born in 1997 (pronouns he/she/they). He studied Theory and History of Art at the Athens School of Fine Arts and has recently started studying Theater Directing at the Drama School of the National Theater of Greece.
In 2016 Thanos moved to Corfu attending Audiovisual Arts courses and then had an internship in Brooklyn, NYC as a set assistant at fashion and advertising projects. In 2018 through Space Manifesto, Thanos’ drag persona, they participated in various projects and shows in Greece, France, Germany and the Netherlands at venues including Stegi Onassis and the National Greek Opera. Thanos is a founding member of Drag Sabbat, the first drag activist collective of Greece and has curated events including Drag Queers for Justice and the Athens Festival of Queer Performance in the last years. In 2019 he moved to Berlin for one year and then moved back to Greece for his directing studies. Since 2020 Thanos has collaborated with Yusra magazine where she publishes fiction and autobiographical short stories.