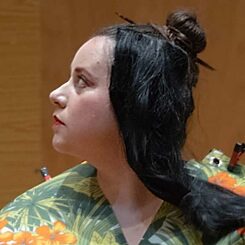 © Vicky Kyriakoulakou Vicky Kyriakoulakou is a theater maker, working as an actress, director and teacher. Her artistic approach combines fine art with pop culture, big and small scale, opera and performance, philosophy and confession.  She has obtained a BA in Finance Management and Banking (University of Piraeus), a BA in Drama (Agia Varvara Drama School) and an MA in Performance Making, (Goldsmiths, University of London). In 2015 she completed studies in massage therapy. She co-founded and collaborates as a creator and performer with Nova Melancholia (Athens, 2006), Vacuum Theater and Ferodo Bridges (London, 2012). In 2012, she was nominated for the Melina Mercouri Prize for most promising young actress. She has been commissioned by the Municipality of Piraeus, the Onassis Foundation and the British Arts Fund and her work has been presented in Athens, London, Edinburgh, Berlin, Bremen, in Athens Festival and in Athens Biennale amongst others. She has taught theatre to professional and amateur actors, teenagers and 65+, but also all-inclusive groups of people (mental or physical impairment), who are her favorite students.