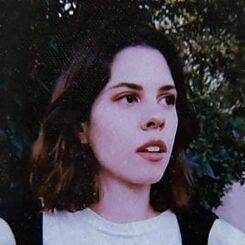 © Zoe Sigalou Zoe Sigalou (b. 1993 Athens - Greece) is a performer who uses various art-forms to explore the connection between her dreams and real life. She studied Translation and Interpreting at the Ionian University and Dramatic and Performing Arts at Arhi Drama School. She's a performer, scriptwriter, director and producer. The last couple of years, she has collaborated with Syllas Tzoumerkas, Christos Passalis, Elina Psykou, Sine Qua Non Art and Nelly Karra. In 2020, along with Marina Siotou, she co-wrote the films, Corona Australis (TIFF, 2020) and The Beast who Walks Like a Man. The latter received the Hellenic Broadcasting Corporation (ΕΡΤ) award at Olympia International Film Festival and will be filmed in the summer of 2021.