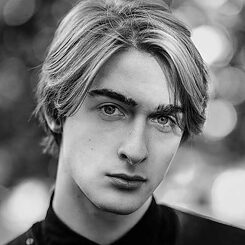 © Marija Smanja Srđan Ćurlić was born on September 20, 1994 in Banja Luka. He studied interior design and industrial production at the Highschool of Technology. Currently, Srđan is in the last year of his dramaturgy studies at the Academy of Arts of the University of Banja Luka.
Since graduating from high school, he has participated in several poetry competitions and events - including the Desanka Maksimović competition in Valjevo in 2012 and 2013 as the only participant from Bosnia and Herzegovina. In 2017, the Ministry of Transport and Communications of the Republika Srpska chose Srđan's slogan "NITI 1" as the official slogan for a campaign to increase road safety in the Republika Srpska. For this campaign, he also wrote a radio jingle that was broadcast on local radio stations.
Srđan was one of the winners of the best student poetry at the First Poetry Competition in 2018 and performed at the poetry night From the Pen of a Student, organized by the Faculty of Philology at the University of Banja Luka.
In 2020, he won the second place in the radio play competition on the theme of anti-fascism with his radio play Nadija, the selection of which was guided by the radio jury of BHRT and the Youth Initiative for Human Rights in Bosnia and Herzegovina.