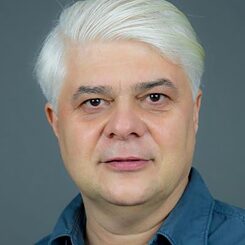 © Lucian Năstase Theodor-Cristian Popescu
(b. 1967) has staged around 70 performances, mostly of contemporary texts, in national premieres. He is one of the pioneers of Romanian independent theatre after 1989 with Compania Teatrală 777, but he also founded and managed La Compagnie Theodor-Cristian Popescu in Montreal, where he lived for several years and taught at the National Theatre School of Canada and at the University of Quebec.

BA in Directing at the Academy of Theatre and Film in 1994, Master of Fine Arts at the University of Montana (Fulbright grant) in 2002, PhD in 2011 and Habilitation in 2018 at the University of Arts in Tîrgu Mureș, where he created and directed a Master's Program in Contemporary Theatre Directing in 2008; fellowships and residencies at the Royal Court Theatre London, European Directors School Leeds and New Europe College Bucharest, among others.