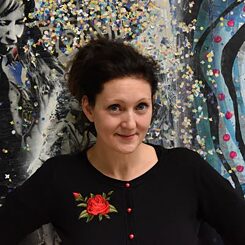 © Robert Frank Rebekka Kricheldorf, born in Freiburg im Breisgau in 1974, studied Romance languages and literature at the Humboldt University in Berlin and scenic writing at the Berlin University of the Arts. In 2004 she was an in-house playwright at the Nationaltheater Mannheim and from 2009 to 2011 a dramaturg and in-house playwright at the Theaterhaus Jena. In 2019, she held the Saarbrücken Poetry Lectureship. She has written numerous commissioned works for various theatres, including the Staatstheater Kassel, the Deutsches Theater Göttingen and the Deutsches Theater Berlin. She has received several scholarships and prizes, e.g. the Publisher's Prize and the Audience Prize of the Heidelberg Stückemarkt, the Kleist Prize, the Schiller Prize of the State of Baden-Württemberg and the Kassel Prize for Comic Literature, as well as several invitations to the Theatertage in Mülheim and the Autorentage in Berlin. Most recently, her plays Das Waldhaus (Theater Oldenburg) and Der goldene Schwanz (Staatstheater Kassel) premiered. Lustprinzip, her first novel, was published in February 2021. Rebekka Kricheldorf lives in Berlin.