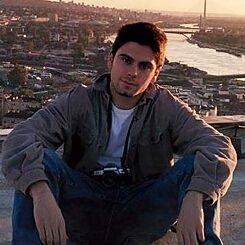 ​© David Jakovljević David Jakovljević, born in Valjev in 1996, is about to graduate from the Drama Department of the Faculty of Performing Arts in Belgrade. During his studies, he has written scripts for five short films as well as two scripts for feature films, one of which, "Once Upon a Time in the Balkans", was sponsored by the Film Centre of Serbia in the call for proposals for the promotion and development of scripts, and the other, "Decapitation", in the call for proposals for the production of feature film debuts. His play "The First Day", directed by Pavle Terzić, was performed at the FIST Theatre Festival.