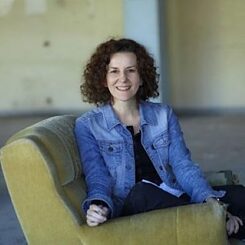 © Alexander Paul Englert Dea Loher, born in 1964 in Traunstein/Upper Bavaria, is a prose writer and one of the most important contemporary playwrights in the German language. She completed a master's degree in German and Philosophy at Ludwig Maximilian University in Munich and then studied scenic writing at the Academy of Arts in Berlin, among others with Heiner Müller.
She has had a long-standing working relationship with director Andreas Kriegenburg, who has premiered many of her plays. In addition to various individual awards, Dea Loher received the Else-Lasker-Schüler-Dramatiker-Preis for her complete works in 2005, the Bertolt-Brecht-Literaturpreis in 2006, the Berliner Literaturpreis in 2009 and the Joseph-Breitbach-Preis in 2017. Her plays have been invited several times to the Autorentheatertage and the Mülheimer Theatertage. Twice Dea Loher won the Mülheim Playwrights' Prize: in 1998 with Adam Geist and in 2008 with Das letzte Feuer. With Diebe in the world premiere by Andreas Kriegenburg, a play by Dea Loher was shown for the first time at the Berlin Theatertreffen in 2010. In 2009, Dea Loher received the Berlin Literature Prize and the Heiner Müller Visiting Professorship for German-language Poetics at the Free University of Berlin. She has been a member of the German Academy for Language and Poetry since 2013 and of the Academy of Arts since 2016.
Dea Loher's first play Olgas Raum was first performed at the Ernst Deutsch Theatre in Hamburg in 1992. This was followed by Tattoo (1992), Leviathan (1993), Fremdes Haus (1995), Bluebeard (1997) and Adam Geist (1998). Loher quickly became one of the most widely performed and prolific young playwrights. Her plays are set in modern society and make human experience accessible.
Dea Loher's first collection of stories Hundskopf was published in 2005. As in her plays, she draws portraits of marginalised figures in society who face the challenge of crossing unfamiliar boundaries. In 2012, her first novel Bugatti emerges.
.