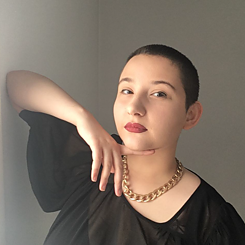 © Luiza Mihailescu My name is Luiza Mihăilescu, I am theatre director from Romania. My main interests are social-political theatre that deals with mental health, eco-feminist, queerness and geopolitics of nationality and migration. I studied Theatre directing BA in Bucharest, Romania at the National University of Theatre & Film Arts led by Radu Apostol and Răsvana Cernat and Theatre directing MA at Royal Holloway University of London in Egham, United Kingdom, lead by Katie Mitchell.
I am very interested in developing new dramaturgy as I believe that most of the mainstream theatre texts reuse a patriarchal heteronormative model that is not in accordance with my personal beliefs. I have previously worked closely with writers, such as Mihaela Michailov in order to develop new forms of representation on stage or with devised methods.
The themes of migration and nationality are very important in my work because I believe in investigating what the common narrative about nationality is and deconstructing it trough theatre. For my dissertation project, at Royal Holloway University of London, I worked in a devised way with three actresses and one non-binary performer (who self-identified as Slovenian, Romanian, British and Singaporean) and tried to deconstruct our personal perceptions of our nationalities and of others nationalities while interrogating the British colonial past in front of the current xenophobic rise during Brexit. All of my artistic work comes from an intersectional eco-feminist approach, so I would like to further investigate the narratives about nationalities and migration policies in that context.