Urban Dance Art in Germany
The Origins and Beginnings 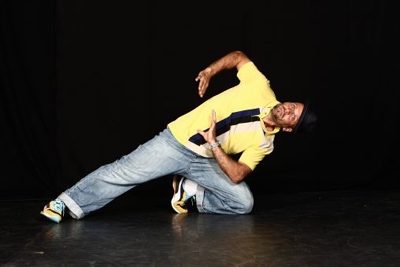 Niels Robitzky, aka Storm, writes about the establishment of urban dance art that is often summarised simplistically as hip-hop dance.

At the beginning of the 1980s, when hip-hop came to Germany, nobody realised how big this culture would become. Back then, the dance forms popping, locking and b-boying were naively lumped together by the media under the term “break dance”. At second glance, however, it became clear that these dance forms all had their own history, philosophy and their own musical access. These dance styles existed long before the term hip-hop came about.

Locking was developed by Don Campbell from Los Angeles, who toured with his group The Lockers mainly in the ‘70s. They danced to funk and soul music. Due to the programme Soul Train in which various musical performances were presented in a kind of club atmosphere, this dance spread throughout the USA. Since we couldn’t get this programme in Germany and didn’t get to know locking until the early ‘80s in the trailer to the ZDF programme Breakdance. Mach mit - bleib fit (Break dance. Do it – stay fit), it was clear that there would be misunderstandings.

In the mid ‘70s, popping emerged in Fresno/California with Sam Salomon and his group, the Electric Boogaloos. Dance styles, like for example the Filmore strut, snaking or also robotting, some of which had already existed for a while, but in which the technique of the pop became part of the performance are now summed up at the championships under “popping” as the generic term. Both dance styles come from the west coast of the USA.

Only b-boying, also known as breaking, comes from New York and is thus described as the first hip-hop dance. In the New York of the 1980s, there were, of course, also lockers and poppers who hung out in the same clubs as the B-boys. So the media decided to find a generic term for all these dance styles and in their ignorance came up with “breakdance” – that was the beginning of this phenomenon, which was also marketed here in Germany. Nowadays, anyone who uses this term not only outs themselves as an amateur but also, from the viewpoint of the enlightened community of creative artists, follows in the tradition of ignorant European imperialism that exploits hip-hop culture, and thus also a very large section of Afro- and Latin-American culture.

Also, there is the fact that break dance is associated with pantomimic movements, white gloves, reflective sunglasses and baseball caps danced to electronic music from the ‘80s. These clichés have almost no connection to the above-mentioned dances. B-boying is danced to “break”, the rhythmic, percussive instrumental part of a song. That’s where the b in b-boying comes from and hence also the term “break dance”. The interpretation, so often accepted in this country, that “break-dance” has to do with breaking up the dance into a lot of short, sharp movements thus needs to be amended, as this is actually known as popping.

Not until the term hip-hop was, like in music or street art cutlure, established for this culture from 1982 on were the kinds of style that developed in the following years referred to collectively as “hip-hop dances”. In most cases here a distinction is made between “old school” and “new school”.

From this very extensive vocabulary – almost every step has its own name – house dance was developed to house music in the early ‘90s in the club scene in New York. Because of the influence of the music, however, house dance does not count as one of the hip-hop dances, but it is one of the urban dance styles. Much the same applies to the dances Vogueing and Waacking.

Thus the cultural value is still really difficult to assess as the break-dance fashion trend from 1984 and associations with the term street dance basically do not allow for a neutral evaluation. The big mistake here with the term “street dance” is translating the word “street” literally. In American English the term is used as a synonym for “everywhere”. You can compare this with “street wear” which is translated in German not as “clothes for the street” but as “casual wear”.

Furthermore, there is the fact that we artists from the urban scene talk of “street dance” when referring to the learning pathway that describes the autodidactic access. While we learn our art by means of a continuous dialogue with others and by permanent reflection, ballet dancers, in contrast, go through an academic training. Thus “street dance” should not be understood as a collective term for dance styles, but simply as the opposite of academic. Otherwise 99% of all dances that have developed on this planet would probably be described as “street dance”. For the dances I have described here, together with tap dance, capoeira, tango, salsa or kathak were all developed in certain social environments and spread in the same way.

Niels Robitzky, aka Storm, has been representing hip-hop and funk styles since 1983 and is one of the leading artists and pioneers in this field. He became world famous with the dance styles popping, locking and b-boying. Nowadays he is responsible for the infrastructure of numerous dance events. He also teaches throughout the world with a unique didactic concept and has exerted a decisive influence on the establishment of the urban dance art in theatres.