Situated aloof at about 60 kilometers north of Dar es Salaam city in Tanzania, Bagamoyo has become a town with allure which attracts both the foreigners and the local Tanzanians as well. But what is the secret for this special attraction?

When touring Bagamoyo town during the Bagamoyo International Festival of Arts and Culture, so often I come across a crowd of its kind, with mix of people from different countries and, in performance, exhibition and various activities; I see excellence in arts and cultural products which reflects different fields and genres of arts and diverse cultures. In this festival the local individuals and foreigners from different countries, and artists from Africa and across the world, establish contact and relation that has a larger impact extending across the world. It is a great dialogue of arts and culture.
Bagamoyo Festival is a product of Taasisi ya Sanaa na Utamaduni (TaSUBa) –an institute established by the government of Tanzanian as an Executive Agency, replacing what was the Bagamoyo College of Arts. This college was also founded by the government in 1981 replacing the national group of performing arts. 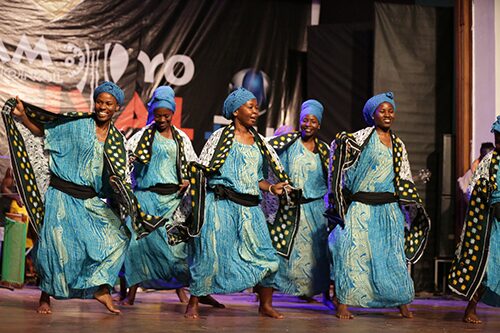 Lumumba Theatre Group entertaining at the international art and culture festival in Bagamoyo | © TaSUBa The process of transformation from a national arts group in 1962/63 into an independent government executive agency in 1997,  seemingly a slow and lengthy process, signals the fact that Tanzania had aimed at setting up a permanent priority in creation and promotion of a living culture.
That is why in this particular cultural centre, students from different parts of Tanzania and abroad meet and receive training in various fields and genres of arts. Here the youth study fine arts, modeling, sculpture, braiding, traditional and modern music, modern dances and traditional dances from the tribes of Tanzania. They also learn stage arts and techniques, costumes and fashion design.
Training in Bagamoyo Institute of Arts and Culture reaches its climax at the Bagamoyo International Festival of Arts and Culture at which students and foreign artists showcase the ‘fruits’ of their creative work giving the real image of the major talking point of culture through excellence in arts and crafts of the highest standards.
Bagamoyo International Festival of Arts and Culture, in a special way, reflects the origin and history of Bagamoyo town. The natives of this town are those coming from the coastal hinterlands of Pwani region, including Wazaramo, Wakwere, Wadoe and Wazigua. People from these tribes are thought to have settled in the area even before the 8th century.
Through activities of commerce and trade between those natives and other Africans from further interior of the mainland, such tribes like Waluguru, Wakamba and Wamakonde settled and became part of Bagamoyo society too. And in recent decades, in the twentieth century, the town has continued to attract societies from diverse tribes from mainland Tanzania, and even from Zanzibar which lies 45 kilometers off the coast of Bagamoyo, to migrate and settle. 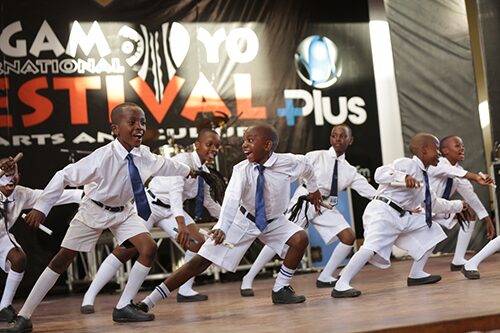 One of the traditional dance school groups at the Bagamoyo international festival of art and culture | © TaSUBa Some of these ‘settlers’ form part of arts community and major stakeholders of culture of Tanzania, among them the champion of traditional music, the late Hukwe Zawose, a contemporary musician Vitali Maembe, renowned fine artist and the Bagamoyo College of Arts laureate, John Shogholo, Maria Cidosa the owner of school of handcraft and fashion design and sculptor Mwandale Mwanyekwa, popularly known as Big Mama.
This migration is propelled further by the Bagamoyo Festival, since the festival has increasingly attracted people from most parts of East and Central Africa, gesturing and calling stakeholders of culture and artists towards this historical town. The annual festival, which has been featured thirty eight editions, contributes in the progress for the regional integration of Eastern and Central Africa, since there are signs of increasing in number of groups featured from these areas. The Festival audience has also grown and reached over fifty thousand people during the 36th edition, in 2019.
This trend adds to the fact that TaSUBa has been designated as the Centre of Excellence for Arts and Culture Development in East African Community.
At this juncture, Bagamoyo International Festival of Arts and Culture may be viewed much better through its contribution to the wider society of East Africa and Central Africa. Festivals have been crucial for artists and stakeholders in arts and culture to strengthen the market of their products in the sense of giving them visibility and promotion within their fields of specialization. This results in individual artists and groups to realize trade deals from their works through winning more contracts and selling the product of their creativity.
More important is the nurturing of their fields through interactions with diverse audience and live interactions with other artists. Besides the benefits to artists and their groups, the festival allows the wider society to participate in discussions and dialogues on creativity and culture and therefore raise their consumption of artistic and cultural goods. 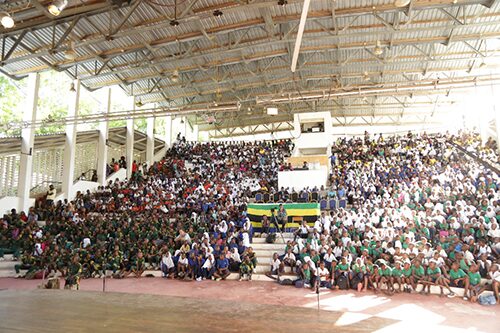 Student audience at the Bagamoyo International Festival of Art and Culture, where the students get special invitation to entertain and watch during one of the shows on selected days | © TaSUBa I regard Bagamoyo Festival as an important tool for Tanzania’s participation in steering efforts for social integration in this region of East Africa in accordance with the aim and objective for the creation of East African Community. Moreover, the festival has developed and still maintaining cultural appropriation between various societies. The festival has kept and sustained unending passion for the town of Bagamoyo which has much contributed to the founding of friendship and fraternity between societies from different parts of Tanzania and other regions of the world.
If used more productively, the festival may help Taasisi ya Sanaa na Utamaduni to ensure the sustainability in developing itself, something that has been a challenge to many public institutions. This requires cooperation between the institute and central government, development partners and wider international society. The impact shall be beneficial to all the stakeholders.