NO doubt, films are part of The Art world, being a creative way of representing it. Although Tanzania doesn’t have an established industry, as Hollywood, Bollywood or even Nollywood; it’s still part of this world. Though at an earlier stage of development than these giants, it does exist. All-be-it, mainly an arena where practitioners are predominantly self-employed.

Pleased to say that this has not stopped Tanzanians from taking on the challenges. There is hope that the East African country will have a flourishing film industry, one day. By that time, it would be advantageous that its’ women be fully recognised for the important and unique input they have in this sphere. 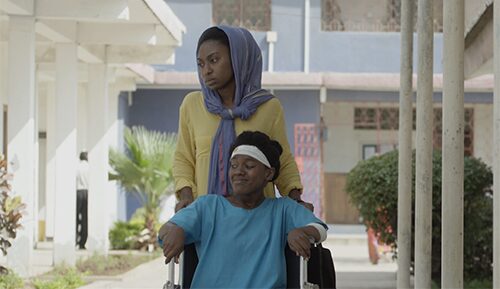 In the multi-award winning Feature Drama, T-Junction by Amil Shivji, Fatima, played by Hawa Ally, pushes Maria, Magdalena Christopher, in a wheelchair after accidentally meeting in a hospital. Cece Mlay was the Assistant Director for this 2017 production. | © Kijiweni production Such optimism was reflected during a conversation with Tanzania’s own First Assistant Director Priscilla Mlay. She’s popularly known as Cece Mlay and has held positions of Continuity and Wardrobe person, together with Scrip Supervisor. This young lady has also conducted two workshops, in 2017 and 2018, at the Zanzibar International Film Festival (ZIFF).

These workshops were specifically looking at women in filmmaking, which she acknowledges as a great opportunity for filmmakers in the East African Region to meet and share ideas. These were very much an “eye-opener” for her, by presenting a platform from which women in the region to get a better understanding of the difficulties and challenges faced, given a common aspiration and environment.

“It was good meeting like-minded people, with similar visions, all moving towards the same goal. I got an extra boost of energy. We shared the vision of wanting a vibrant film industry in our countries and the region,” she declares.

Although there are very talented Tanzanian female filmmakers, Cece Mlay says they are often restricted to where male producers deem women should be, which is mostly acting. There’s little push for women in technical areas, such as camera, sound or lights.

“If producers would accommodate more women in those areas, they would excel. Tanzanian women are also rarely seen in Soft Skills, such as Location or Production mangers. However, over the years we have seen huge leaps and bounds in women taking-on more directing and writing roles,” she declares.

To see Binti by Seko Shamte, winning best feature, at this year’s ZIFF and Esther Mndeme’s short film Salama being nominated, certainly gives hope Tanzanian women filmmakers have seen the need to speak with their voices. Yes, this is the same Esther Mndeme, who won the best short film in 2018, for Leah, at the ZIFF. There’s also Godliver Gordian and Hawa Ally, who each won Best Actress, in 2016 and 2017 successively, at the ZIFF. 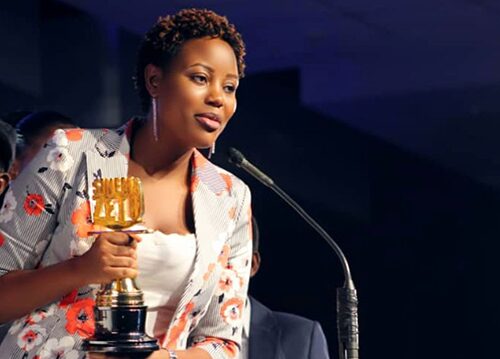 Esther Mndeme receives the Best Female Director award, at the Tanzanian Sinema Zetu Film Festival (SZFF), for the television series, Safari Yangu in 2019. | © Ochu Kiota It’s worth noting, apart from acting, Hawa Ally has also held positions as Wardrobe and Continuity person, together with Assistant Director. Every position on a film set, she says, has its own journey and gives her a lot of satisfaction being part of a team, bringing local stories onto big screens.

“There’s much to explore in films, which are not necessarily achieved from in front a camera. I’m not satisfied with only acting. I’m fascinated by the journey experienced, from research to the film being screened,” Hawa Ally admits.
Kenya’s female producer Toni Kamau’s Softie documentary feature, made quite a buzz, at this year’s ZIFF and the Texas-USA-based Sundance Film Festival. She’s the youngest female African documentary producer to be invited as a member of the Academy for Motion Pictures Arts and Sciences - Documentary Branch, class of 2020. Also, Kenyan director Hawa Essuman has also been making a lot of waves over the last five years.

It was fortunate to get hold of Professor Martin Mhando, Director of the ZIFF and lecturer, at Murdoc University in Australia. He agrees the number of women directing or producing films in Tanzania is very low. However, proposes the focus now must be to create conditions in society and the industry that recognises this. Males having the dominant voice in film results in the world being much poorer, he says. 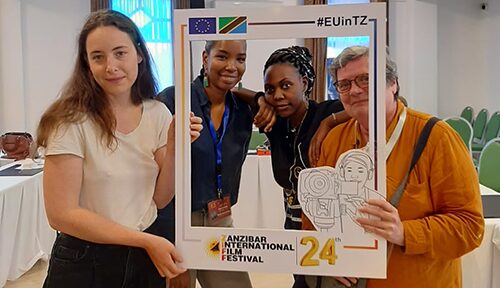 Trainers of the Acting for the camera workshop, at this year’s Zanzibar International Film Festival (ZIFF), take a memory span. They are from left to right Salome Richard (Belgium), Seko Shamte and Lillian Sundqvist, (Tanzania) and Marie Vermeiren (Belgium). | © Supro He referred to the ZIFF’s fully-fledged programme called Women Panorama. There focus is on women in society, highlighting and addressing pertinent gender, health and social issues. It has become a medium of “Women’s Power and Visibility” and usually comprises of a series of workshops, seminars and symposia.

It’s organised and centred on the visibility of women in and through the medium of cinema, The Arts and media. Fictional films and documentaries, on specific women issues, becomes tools, in this programme.

“There’s only one world-vision, that of patriarchy, being heard. Despite this, there has however been films produced by women, who have recognised their voices are important and have consciously gone-on to develop strong voices against films portraying the patriarchal view of the world, to balance the way it’s seen in films,” Professor Mhando concedes.