Film Program: Shaping the Past: Past as Process - Goethe-Institut

Shaping the Past: Past as Process

“... concepts of history are always contested, always changeable, determined by the now as much as they shape our understanding of this now.”*

- Fatima El-Tayeb, Undeutsch (31)
Past as Process - Eventive Past as Process is a program of nine films that trouble the notion of fixed histories. The Gestalt of history is not a figure, it is a process of configuration. This process of shaping the past is sculptural, artistic, and creative, which is why film lends itself so well to our understanding of time and memory.

As a structure of knowing, the past is built on a foundation of the present and the future; all of our past-oriented epistemologies are framed on shifting ground. This program sits where the telling and the knowing of histories are connected to time and place. As soon as we write history – when we hold it in one book or language or perspective, the present-tense calls for a rupture. Like an ornate clay pot that explodes into a hundred pieces in the kiln, it is the tiny bubbles in the clay, the incongruities in the construction, that destroy the form.

These films are the shards in the kiln. Each is part of a larger telling and simultaneously whole. The films in this program break the mold of not only representations of content, but of textual form, aesthetics, and style. Animation in Memory Boxes (2019) and Home? (2018) illustrates effective archiving and tags the dominant visual narrative to literally inscribe another account. Roots Germania (2007) and Roan (2019) explore the idea of “person as monument” in the family. The documentaries Duvarlar - Mauern - Walls (2000) and Past, Present, Tense (2015), made in Berlin, reflect the active listening of oral histories. The musical form of Zurück auf LOS! (2000) takes the telling into the fantastical, to share affective aspects one can only reach tonally. Each film visualizes memory, past, and history in forms that are shifting, moving, and in transformation: a grandmother, an apothecary cabinet, East German Schlager covers. Separated into four categories, the films demonstrate the artistry of shaping the past in their form (i.e. Animation), approaches (speculative and collective), and untraditional archives (focus on family).

June 21 - 24, 2021
Pt. I - Redrawing the Past
In their animations and colorful subtitles, these films toast the tellings of history with subjective points of view.

To protect himself from the trauma of the past, Zoni Weisz blocked all of his family memories. Not just the horrible memories of their deportation to Auschwitz and the empty apartment left behind, but also the beautiful ones: of his little sister’s coat, the forest, and his aunt’s caravan. Based on Weisz’s memoir The Forgotten Holocaust, this short animated film, produced by RomaTrial e. V. and the Foundation Memorial to the Murdered Jews of Europe, visualizes the emotional side of Weisz’s harrowing journey from Dutch Sinto Holocaust survivor to activist.

Blue moves from small-town Germany to the capital city of Berlin. Through stream-of-consciousness musings to their diary and hand-drawn animation, the short documentary inscribes with what is outside of the frame: the colonial history and context to Black life in Europe. A humorous and infectious declaration of unrequited love to Germany.

Made just two years after the fall of the Berlin Wall, Duvarlar – Mauern – Walls shapes the past through oral histories that show the vast diversity of arrival stories in Germany. Through personal interviews, the documentary tells the remarkable stories of how Turkish intellectuals, artists, and guest workers created a home for themselves in Germany to make a significant contribution to German business and culture. Candan’s provocative personal refections: “How does a foreigner become an immigrant?” and colorful subtitles punctuate the intimate perspectives in this timeless film.
Redrawing the Past

June 24 - 27, 2021
Pt. II - Speculative History-Making
These films do not just tell history, they pose questions and place new characters in classic stories to interrupt what we think we know about German legends and who gets to be legendary.

Polat’s film depicts an encounter between a Turkish man and a German woman that predates the Wirtschaftswunder of the 1950s. Countess Sophia Dorothea von Wilhelmsburg was imprisoned in her husband’s castle in the late 1600s as punishment for falling in love with another man. Polat envisions her complex relationship with her servant, a Turkish refugee of the wars between Poland and Russia and the Ottoman Empire. The cyclical nature of the story is duplicated in the script and the cinematography. Not only does the rupture in the relationship between the Countess and her quiet servant begin at the same place that it ends, the spiraling of the performances also questions the passage of time and its supposed linearity.

When a German neo-nazi band performs the lyric, “this bullet is for you, Mo Asumang,” the journalist and TV presenter sets out to overcome her fears and investigate the roots of racism in German culture. With tenacity and courage, Asumang interrogates neo-nazis and eventually takes the advice of one literally: Asumang goes back to where she came from (no, not to her birthplace in Kassel – to the home of her father: Ghana). Asumang turns the provocation into an opportunity and meets with her family to learn more about her Akan heritage. Rather than look for differences, Asumang finds similarities between German and Ghanaian culture. Roots Germania tells a speculative history of Germany, one where xenophobia and hate are a contradiction to Germanness.
Speculative History-Making

June 27 - 30, 2021
Pt. III - Home Is Where the History Is
Films that depict intimate encounters with family – both those we are born into and those we create out of close relationships along the way – and how they can rewrite empowering versions of our past, present, and future selves.

In a warm high-rise apartment in Berlin-Reinickendorf, an elderly Vietnamese grandmother and her granddaughter share intimate moments and a delightful tenderness. The short documentary shows through soft details what has been passed on to the German generation and what has been left behind. An enchanting reminder of how heritage is preserved in the humans whom we hold dear.

The 360-tracking shot winding down to a grey intersection shows the approach to time and storytelling in this queer musical. Unlike the one-way street in Berlin’s Prenzlauer Berg aspiring singer and perpetual party boy Sam lives, time moves in all directions in this tragic comedy. A positive HIV diagnosis makes the past ever present, and the family of friends Sam creates in post-unification Germany prioritizes living in the present tense against all odds.

This film contains coarse language.
Home Is Where the History Is

Predominantly East-Germany-socialized interviewees look back on German reunification and the hostile time that immediately followed, where racist attacks of arson in Rostock and riots were commonplace. The engaging discussion surrounds the question of German identity and who is served by fixing this position in whiteness. Characteristic of D'Angelo’s work, the conversations remain fluid, intimate, and personal, while speaking volumes to the responsibilities of colonial histories and detriments of cultural amnesia.

Humor mixes seamlessly with sorrow in this personal documentary by actress Maryam Zaree, who arrived in Germany with her mother as a political refugee from Iran. Zaree seeks answers for her recurring nightmares, her anxiety, and the silence in her family surrounding their imprisonment in the political camp, Evin. The dramatic and tactile visual motifs of floating and flying serve as effective metaphors for letting go. Through her collective process of inquiry, Zaree finds a way to release, not her memories, but any notion of them being the whole truth of her birth and early childhood in captivity.
Reshaping the "Single History"
Karina Griffith
Berlin, Germany
​May 2021 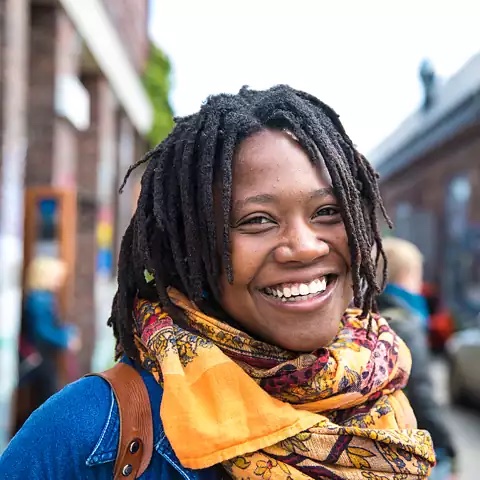 Karina Griffith’s artistic and curatorial practice explore the themes of fear and fantasy, often focusing on how they relate to belonging. She is a PhD candidate at the University of Toronto’s Cinema Studies Institute where her research on Black authorship in German cinema interacts with theories of affect theory, intersectionality and creolization. Griffith holds a lecturer position at the Institute for Art in Context at the Berlin University of the Arts (UdK).

Griffith has recently done curatorial work for the Latitude Festival 2020 and for the Berlinale Forum in 2021.