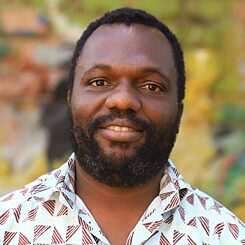 © Kevin Kabambi Patrick Mudekereza is a writer and cultural operator born in Lubumbashi in 1983. He initiated several art projects, including with the collective Vicanos Club, concomitantly studying and getting a degree in Industrial Chemistry at the Polytechnic faculty of the University of Lubumbashi. Patrick holds a Master in History of Art at the Witwatersrand University in Johannesburg, South Africa. He worked as an administrator and curator for visual arts at the French Cultural Centre in Lubumbashi, was editor of the cultural magazine Nzenze, and co-initiated Rencontres Picha, Lubumbashi Biennial. He was member of the steering committee of Arterial Network from 2009 to 2014 and International Biennial Association from 2014 to 2017. Patrick received the Congolese National Award for Art, Letters and Science in 2015 and is currently director of Waza art center in Lubumbashi.