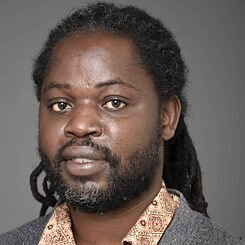 © Basilio Muchate Rafael Mouzinho was born in Maputo, Mozambique, and began his relationship with the arts by taking a ceramics course (1999-2005) at the Escola Nacional de Artes Visuais (Mozambique). Thereafter, he completed a degree in Visual Arts at the Instituto Superior de Artes e Cultura (ISArC), in Maputo (2009-2012), and has combined his practice as an artist with art curating, writing and teaching.

He was one of the advisors for publication Atlantic: Contemporary Art from Mozambique and its Diaspora, published by Hangar Books (2020), Lisbon-Portugal.

Currently, he is Assistant Curator at the Colecção de Arte/Galeria of the Universidade Eduardo Mondlane (Mozambique) and teaching Curating Workshop at the Instituto Superior de Artes e Cultura (ISArC, Mozambique).