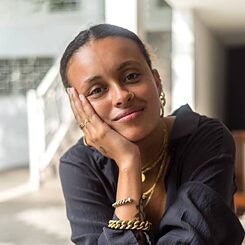 Senegalo-Swiss photographer, visual and politically-committed artist Eva Diallo was born in 1996. She graduated in 2018 from the School of Applied Arts in Vevey, Switzerland. It was during her last year of study that she made her first reporting/documentary on refugee camps in southern Italy. From that very moment, everything seemed highly logical: she would follow that path. Themes linked to migration from Africa to Europe in particular, echoed by her own family history, moved her deeply. Straight after finishing her studies, Diallo went on to settle in Senegal, her mother’s country. She quickly began her research and questioning on the link between her own family and illegal migration, giving rise to the project entitled Bolol. Divided up into several chapters, Bolol has been exhibited during various events in museums and art galleries. Initiated in 2019 in Senegal, this project is taking its course between the West African countries that link Senegal to the south of Italy. Diallo recently finished the sections taking place in Mali and Burkina Faso.