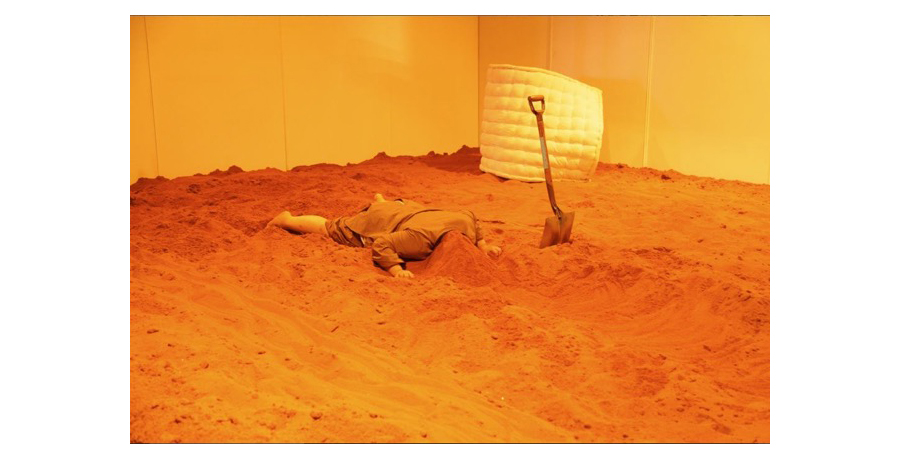 Over a roomful of red sand 15 centimetres deep, Melati Suryodarmo transports a large, white mattress. She carries it on her head in the familiar burden-bearing posture of the Global South or arches it over her prostrate body as though sheltering from the elements. The other object in the space is an old spade with which Suryodarmo moves, Sisyphus-like, shovelfuls of sand from one part to another without discernable purpose. At other times, it is clear she is attempting to erect a trench or ridge, but such utilitarian actions seems always accompanied by a sense of defeat—at any moment her sculpt-ing of the landscape may be abandoned, Suryodarmo’s task unfinished as she resumes dragging the spade unproductively around the space, or wearily retreats to the sanctuary of the mattress.

There are few unambiguous cultural signals here. The artist’s earth-coloured scrubs are carefully neutral in effect, and even the red sand—palpably redolent of the history and landscape of Indigenous Australia—was, as Suryodarmo explained to me during our interview, an “accidental connec-tion,” chosen simply as a reflection of the red brick with which houses are usually built. The work’s inescapable resonances with the unfolding European refugee crisis were similarly unpremeditated. As I learned, Suryodarmo revels in these serendipities, and most especially in the multiplicity of meanings they open up for audiences of her work. “Consciously or unconsciously,” she says, ‘the public’s view of my art reflects their baggage, their own background, their own space. That’s why I like art, because it doesn’t necessarily have to be authoritative in terms of offering thoughts. Often I think we forget that artists should just give an impulse, a hint or a cue. People like to enter dimensions other than their daily life.”

24,901 Miles, commissioned by OzAsia Festival, is the first live perfor-mance Suryodarmo has premiered in Australia. Accompanied by a significant retrospective of documented live performance works and video art held across multiple venues, the moment feels overdue. Dividing her time between birthplace Indonesia and adopted home Germany, site of her alma mater, The Braunschweig University of Art, Suryodarmo’s body of primarily durational work has acquired international standing. Doubtless her tutelage by Marina Abramović has opened doors, but we need not make too much of this—Suryodarmo’s practice is highly distinctive, a synthesis of European and Indonesian influences and methodologies that, through the filter of an absorbingly eccentric and charismatic personality, transcends category and boundary in its restless interrogation of form and its limits. “For me,” Suryodarmo confirms, ‘there are no restrictions; my work is fluid.”

I ask her about the differences she has perceived between the reception of her work in Europe and in Asia. “I cannot represent public opinion about my work,” she says, “but what I feel through being curated in different kinds of festivals and exhibitions is that the interest in new, contemporary performance is growing in the Asia-Pacific region. In Europe the curatorial ethic is very strong, related to political thought, to cultural politics, but I’m still seen there as representing Asia—not just Melati as Melati. As long as this sort of thing is still going on in the performing arts market, I’m very much not interested.”

Suryodarmo contrasts this with the contemporary visual art world in which she detects a greater openness to formal experimentation and less overt pressure to act as cultural envoy. “There are more people there interested in my art form, in performance art and video. But during the last couple of years I’ve also been working with dancers, choreographers, actors and also visual artists because I want to explore the relationship between theatre and dance, between many different modes. So it’s not just about taking performance art out of the gallery and inserting it into the theatre world; it’s about encounters and exchanges, about how the audience meets the artist.”

Suryodarmo’s work is not usually visceral, nor confronting or confronta-tional. Unlike many of the artists currently engaging with the international resurgence of body-based performance art, she places her body under stress but not in situations of extreme peril—rather the work is meditative, an accu-mulation of subtle, repeated gestures or phrases that focus the passing of time. This may be as little as six minutes, as in the case of her best known work, Exergie—Butter Dance (2000), or, more likely, as much as several hours, or even a day or more. I Love You (2007) saw Suryodarmo convey a 35-kilogram pane of tempered glass around a room for up to six hours while repeating, to the point of meaninglessness, the phrase “I love you.” “I had to move carefully,” Suryodarmo says of the work, “my body following the object. But that’s also like daily life, where many things move you in one direction or another.” In I Love You, as in much of her work, Suryodarmo’s attitude to-wards her body is one in which her power of authority over it is partially sur-rendered, creating a vivid tension between the artist’s agency—her ability to bear and shift the weight of a heavy, unwieldy object—and the physical limitations imposed by both the object and the terrain of the performance space.

The single mattress in 24,901 Miles has been distilled from the 20 with which Suryodarmo performed Dialogue With My Sleepless Tyrant (2013). In that work, inspired by the Hans Christian Andersen fairytale The Princess and the Pea, Suryodarmo lay between the mattresses with only her head ex-posed, her long hair trailing down the side of the stack in an image that re-called another children’s story, Rapunzel, as recorded by the Brothers Grimm. When the weight became too much for her to bear, Suryodarmo would rotate her body and push upwards until the mattresses crushing her toppled to the ground. If I Love You assayed the burden of words and hackneyed notions like romantic love through a sustained image of the body under pressure, then Dialogue deployed an equally suffocating materiality as a metaphor for the social expectations faced by women.

In 24,901 Miles (the work’s title is derived from the circumference of the Earth at the equator) Suryodarmo does something else again, the peripatetic mattress becoming a symbol of home and of our search for roots in a time of mass displacement. The work’s development began, Suryodarmo explained to me, with an investigation of the circular nature of the movement of people and cultures throughout history: “I’m very interested in how our relationship with our ancestors moves in a circle. So in my own culture we see how the Indian people influenced Indonesian culture, also the Aboriginal people here—they grew up, moved, and they came back again. I’m fascinated by the way this cycle never comes to an end until we say ‘actually, I am looking for a home.’ And this is everybody’s basic myth—to have a home. Even people who deny it, strong people who say ‘no—I don’t need a home’, imagining perhaps that their body can be a home. But it can’t.”

The necessity for shelter—a spiritual as well as material precondition for a life well lived—is at the heart of 24,901 Miles, a fact emphasised by Suryodarmo’s resilient but ultimately fragile physical presence within the space. Despite her solid frame, she looks small amid the furrows of red sand, which are thrown into dusky relief by four amber lights. As she drags the mat-tress and shovel around, she visibly tires, her hair becoming increasingly disheveled, her face draining of colour from the effort to alone navigate the encumbering sand. It’s impossible to witness the artist’s physical weakening, stretched out over the work’s two five-hour days, without thinking of the tens of thousands of Syrian refugees huddled in the winter cold of alien countries and wishing, more than anything, to circle home.

This, for Suryodarmo, is not merely an abstraction. Though not a refugee, she has a fraught relationship with migration. Her 1998 work Der Sekundentraum saw her reflect on her doubts around identity and belonging through the folding and piling of hundreds of items of clothing that she had collected during her time away from home. After disordering them again, Suryodarmo then put each item on until the weight and physical constriction of the clothes prevented her from moving—an archetypal anxiety dream in which the body is rendered immobile by an increasingly oppressive outside force.

I ask Suryodarmo if she still considers Solo, Java, the city in which she was born, to be her home. “Yes,” she replies, then adds heartily: “and Germa-ny!” It’s a typical answer, testifying to the fertile crosscurrents of time and place Suryodarmo—perhaps more than any physical location—inhabits.

Melati Suryodarmo will perform her 12-hour work I'm a Ghost in My Own House (2012), in which she crushes and grinds hundreds of kilograms of charcoal briquettes into powder and dust, in the 8th Asia Pacific Triennial of Contemporary Art (APT8) at Queensland Art Gallery | Gallery of Modern Art, Brisbane 21 Nov, 2015-10 April, 2016

This interview is a co-commission with RealTime Australia. 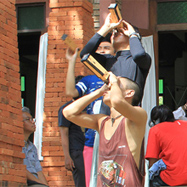