Poets Translating Poets, a two-year project was initiated in Oktober 2014 by the Goethe-Institut-Mumbai, in collaboration with Literaturwerkstatt Berlin, now called Haus für Poesie and in Cooperation with Deutsche UNESCO, with an aim to create a platform for poets from South Asia and Germany to translate each other’s works. During the course of two years, contemporary poetry from Bangladesh, Pakistan, India and Sri Lanka was translated into German by well-known German poets, while German poetry was similarly translated into South Asian languages. By bringing together 51 poets including 17 German poets from across 20 languages through literary encounters in several South Asian locations, this project has stimulated new literary networks and opened new avenues for transcultural understanding. The project included readings, book fairs, photo essays and a sound installation in South Asia and Germany, and culminated in a Poetry festival in Mumbai in November 2016. 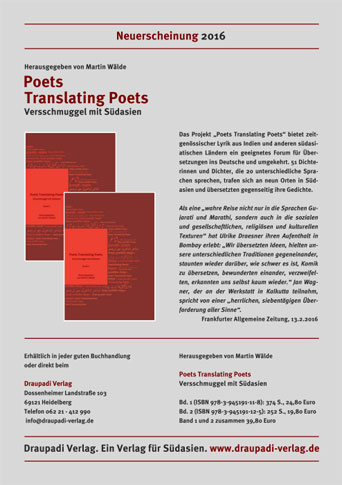 51 poets, who speak 20 different languages met in new places across South Asia and together translate each other’s poetry.

„ For say what one will about the shortcomings of translation, it is and will remain one of the most important and most worthy concerns in the whole of world affairs. “

The project "Poets translating Poets" that we have here on contemporary poetry from South Asia and Germany is the result of an arduous compilation process and an adventurous experiment. These poems, translated into German and several South Asian languages, were done through unconventional methods. They have not been translated in the usual way, by translators with a command of the source and native language, in solitude at a desk. Rather, these translations are the result of an elaborate process of understanding and questioning, involving week-long encounters between fifty poets (working together in groups of three to nine with translators) across nine locations in Bangladesh, Pakistan, Sri Lanka and India. Each of the poets translated into their native language a small, clearly defined selection of poems written by their respective German counterparts as an outcome of personal conversation between them. They all had the courage to take the plunge and engage with poems written in languages they did not know – with unfamiliar scripts and alien sounds. A total of 20 languages were delved into between July 2015 and April 2016: Marathi and Gujarati (Mumbai); Bengali (Dhaka); Kashmiri and Hindi (New Delhi); Sindhi and Urdu (Karachi); Tamil and Sinhala (Colombo); Malayalam, Tamil and Kannada (Chennai/Trivandrum); Odia and Bengali (Kolkata); Telugu, Urdu and English (Hyderabad); Nepali and Mizo (Gangtok/Sikkim). The result would have been pure Babel, had it not been for the terrific‚ interlinear translators who liaised between the poets.

The task of interlinear translators of providing an essentially literal, word-to-word translation of the original texts, prior to the poets encounter was only to highlight semantic and grammatical attributes, and subject themselves to the rather painful demands of not rushing to prescribe an interpretation of the poem. The translators almost always resisted this temptation and handed the field over to the poets. As facilitators in the conversation between the poets, they provided an indispensable linguistic-hermeneutical task and assisted the poets – to the extent possible – in deciphering cultural ciphers, codes and riddles. Sandra Kegel has summed it up neatly in quotes taken from conversations with the participants: “A genuine journey not only into the Gujarati and Marathi languages, but also into the social and societal, religious and cultural textures” was how Ulrike Draesner experienced her stay in Bombay. Draesner continued, “We translated ideas, compared our different traditions, wondered yet again at how difficult it is to translate comedy, admired each other, despaired, barely recognised ourselves.” Jan Wagner, who attended the workshop in Kolkata, speaks of a “splendid, seven-day sensory overload." 1 Rashmi Dhanwani, too, has posted an impressive documentation of the sequence of the translation encounters in conversations with the participants on the website ‘Poets Translating Poets. “Versschmuggel mit Südasien”. Poetry Traverses South Asia and Germany’ (see Reports under /ptp).

The most remarkable and miraculous part of this endeavour is the outcome and the quality of the translated poems. It's not easy to explain why most of the translations have been so successful despite the enormous linguistic barriers, the complex transfer of different cultural connotations, and the different poetic traditions, some of which are completely alien. Poems are highly complex webs of meaning and sound paintings, specific to individuals and to culture, and their translation into another language poses the utmost challenge. They are intimate, closed, unwieldy, and often reinvent their own language. What seems a cliché to poets in Germany is certainly not a cliché in South Asian poetry. Contemporary German poetry is extremely complex in terms of origin and its interwovenness with different traditions and therefore difficult for poets from South Asia to decipher. Perhaps it is simply a matter of poets seeing themselves as being a level different from ‘normal citizens’ and their ability to write poetry gives them a key to help them feel their way into the poems of their counterpart. They thus manage to write foreign language poems ‘into’ their own language, into their own cultural models, and to create an ‘adaptation’ that is removed from, yet in touch with, the original.

Walter Benjamin put it in a nutshell when he said: "Just as a tangent touches a circle lightly and at but one point……a translation touches the original lightly and only at the infinitely small point of the sense, thereupon pursuing its own course according to the laws of fidelity in the freedom of linguistic flux.“ 2   And quoting from Goethe’s West-East Divan, Benjamin cites Goethe's notes addressing the problem of translation: "Our translations, even the best, start out from a false principle, as they want to germanize Indic Greek English instead of indicizing, graecizing, anglicizing German, they are far more awed by their own linguistic habits than by the spirit of the foreign work… the fundamental error of the translator is that he holds fast to the state in which his own language happens to be rather than allowing it to be put powerfully in movement by the foreign language." 3 What often happens in transcultural dialogues and in cultural exchanges, namely an exchange of unprecedented monologues, is just what did not happen in the encounters between poets in South Asia: they listened to each other intently, did not cling to their own languages, and allowed themselves to be ‘powerfully affected by the foreign tongue’.

There are a multitude of motives and only the most important are listed here. Contemporary German poetry is virtually unknown in South Asia and accessible primarily in English translation, which attracts little attention. An exception is Günter Grass, a selection of his poetry having been translated into Bengali and Hindi. Grass was the only German writer of note to have spent time in India and Bangladesh on several occasions. He was particularly interested in the subcontinent and engaged with it, the last time in 2005, when on a trip to Kolkata. An ancient, primarily oral tradition of poetry ever since the Mahabharata 4explains South Asia’s wealth and enormous linguistic diversity. This is continued in the many contemporary poetic traditions in South Asia, most of which are unknown in Germany. Reason enough for the Goethe-Institut to build bridges at a time of insistence on a disastrous, often violent discourse on identity and marginalisation. In almost 60 years of being in South Asia, the Goethe-Institut has never really engaged with the subcontinent‘s linguistic diversity. It was high time that such an ambitious cultural and linguistic dialogue on the particularly complex and very specific structure of language in poetry was initiated.

In Dr Thomas Wohlfahrt and his staff in the Literaturwerkstatt/Haus für Poesie in Berlin we had the experts on our side for the international ‘Versschmuggel’. The experiences and networks of Literaturwerkstatt were and are indispensable for the project, particularly the contacts to the German poetry scene and to the website lyrikline.org, the international archive of poems. Several readings and talks with the participating poets took place in Germany from June to October 2016. The grand finale was in Mumbai from 25th till 27th of November 2016 in the presence of virtually all those who were involved in the ‘Versschmuggel’ with South Asia.