12 May 2021 would have been the 100th birthday of the action artist Joseph Beuys, who died in 1986. This year several books about the charismatic man will be published to mark the occasion.

With his theory of social sculpture, Beuys wanted to overcome the boundaries between art and society. His goal was to expand the definition of art. Everyone is capable of shaping the world socially and creatively. This led to his most quoted words: “Everyone is an artist.” The Kunstsammlung Nordrhein-Westfalen is holding an exhibition by that name in which contemporary artists and representatives from the most diverse areas of society enter into a 12-chapter, “multi-layered, transcultural dialogue with Beuys.” The accompanying catalogue, Jeder Mensch ist ein Künstler. Kosmopolitische Übungen mit Joseph Beuys was published by Hatje Cantz (available as Everyone is an artist. Cosmopolitical Exercises with Joseph Beuys in English). 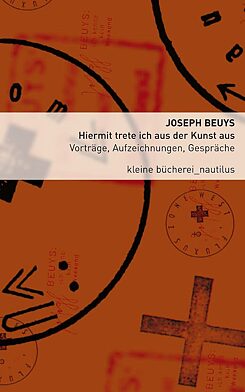 © Edition Nautilus Beuys’ work was also always controversial. Some revered him, others regarded him as a big-mouthed idealist or even as a charlatan. In any case, his notes, conversations and lectures are just as much a part of his work as his visual oeuvre. The volume Hiermit trete ich aus der Kunst aus (I hereby resign from art) contains his talks and lectures.

In Joseph Beuys. Kunst, Kapital, Revolution (Joseph Beuys. Art, Capital, Revolution), Philip Ursprung presents 24 central Beuys locations. His aim is to create a new understanding of decisive actions and projects such as in I Like America and America Likes Me, How to Explain Pictures to a Dead Hare or 7000 Oaks. Ursprung wants to release the works’ fixations on the artist’s biography in order to move his art “into the broader context of twentieth century history.” According to kunstbuchanzeiger.de, the book is a “precisely argued, knowledgeable and engaged portrayal.” The NZZ, by contrast, recommends it only with reservations, “not least because some aspects provoke contradiction.” 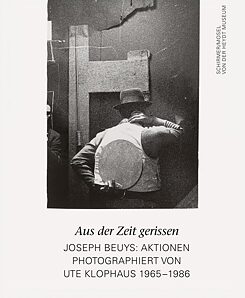 © Schirmer/Mosel Beuys’ close collaboration with the photographer Ute Klophaus (1940-2010) in performances goes back to the 1960s. Beginning with Beuys’ famous 24 Stunden happening, which took place in 1965 in the Wuppertal gallery Parnass, Klophaus photographed his actions for over 20 years. Her preoccupation with Beuys became the focus of her photographic work. The book Aus der Zeit gerissen (Torn from Time) brings together about 120 of these iconic images and accompanies an exhibition at the Von der Heydt-Museum in Wuppertal.

Beuys also made extensive use of the poster medium to disseminate his art and ideas. Joseph Beuys: Plakate. Posters contains the artist’s posters, offering a unique overview of his works, actions and exhibitions as well as his political and social engagement.

Language as a plastic material 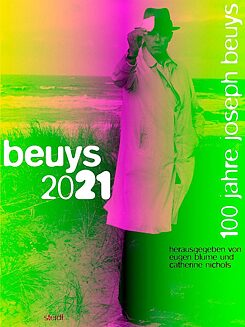 Steidl At the end of May 2021, Steidl Verlag will issue the volume beuys 2021, which summarises the extensive centenary programme for the artist’s 100th birthday and explores the topicality of his complex work. The publication is announced as a “conversation with the ghost of the artist. Numerous people from different disciplines, generations and cultures enter into an association-rich dialogue with his aphorisms about the genesis and usefulness of his ideas of a future conceived from art.”

The exhibition catalogue Von der Sprache aus (available as Starting from Language in English) has been announced for June 2021. The exhibition of the same name at the Hamburger Bahnhof Museum für Gegenwart in Berlin, is scheduled to open on 13 June 2021. In 1985, Joseph Beuys said that he that developed his work “starting from language.” He understood language – on a par with visual means of art – as a plastic material that empowers every human being to participate in society. Beuys’ engagement with language ranges from silence to hours-long discussions. Accordingly, the chapters are divided into the themes of silence, sounds, concepts, writing, mystery, legend and speaking. The exhibition and catalogue present sculptures, drawings, installations, films, posters and documents from the collections of the Nationalgalerie, the Sammlung Marx, the Kupferstichkabinett and the Kunstbibliothek of the Staatliche Museen zu Berlin. 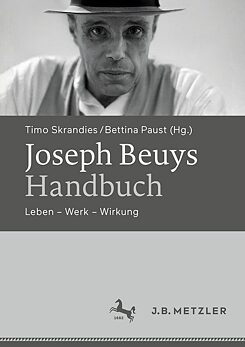 © J.B. Metzler Finally, those who prefer precise classification are referred to the Joseph Beuys-Handbuch (expected for release on 1 August 2021). According to the publisher’s announcement, the handbook is intended to “serve as a basis of knowledge and orientation for interdisciplinary Beuys research.”