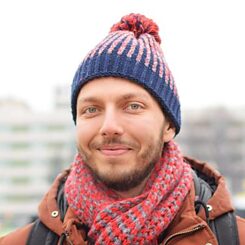 © Stefan Prohorov Stefan Prohorov is a Bulgarian stage director and playwright, working mostly in the fields of theatre and performance art. His work focuses on an interdisciplinary approach towards socially relevant subjects, as well as cross-cultural experiments in the field of classical theatre. His artistic work is focused on interactive and sensorial performances on social issues such as “On voluntary servitude” (Sofia, 2019), “Heritage: Revisited” (Targu Mures, 2019), “Me for you” (Fake political campaign in Sofia, 2019), “Prometheus“(2018), “Mourning Diary” (2018) , LOW COST (2017),“Packages” (2017) etc. From December 2018 till January he worked as programming director of “Cinema House” in Sofia and in July  2019 he joined Executive Board Member of the Association of Independent Theatre.  Several of his plays have been produced in theatres in Sofia, and/or presented at different festivals, such as “Sphere”, Targu Mures 2019, “GATS” Beijing, 2016, INTERPLAY 2012 etc.