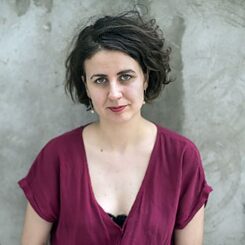 © Marija Janković Tanja Šljivar, playwright, was born in 1988 in Banjaluka, SFR Yugoslavia. She completed both her bachelor's and master's degree in dramaturgy at the Faculty of Performing Arts in Belgrade, Serbia, and also has a master's degree in applied theatre studies in Giessen, Germany. She has written six full-length and several short plays that have been published, read in public and performed in professional theatres in Bosnia and Herzegovina (Bosnian National Theatre Zenica), Croatia, Serbia (National Theatre, Atelje 212, both in Belgrade), Albania, Spain, Poland, Austria, Finland, Slovakia and Germany (Deutsches Theater Berlin, Schauspiel Stuttgart, Theater Dortmund, Theater Paderborn). She also writes scripts ( Die Kelten, Ab morgen beginne ich zu, Etwas Süßes), short stories, radio plays, theatre theory texts and texts for visual art projects. For her stage texts she has received all relevant awards in Bosnia and Herzegovina as well as in Serbia, including the Sterija Prize for the best contemporary play in Serbia. In Austria she was nominated for the Retzhofer Drama Prize.
She has been a guest of the Stadschreiberin and a scholarship holder in Graz (IHAG and St. Air), Vienna (Museums Quartier 21 and KulturKontakt), Prishtina (Prishtina hat keinen Fluss) and Split (Reading Balkan). Her plays have been translated into about 10 languages. In 2019 she was chief playwright at the National Theatre in Belgrade. She is a member of the artist platform Björnsonova and of the activist movement Dach über dem Kopf. In autumn 2020, she started working on her debut novel, funded by the IAS Writers' Programme at Central University in Budapest.