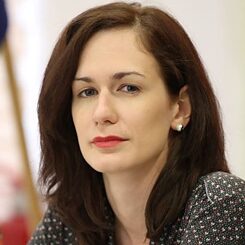 © Asja Krsmanović Asja Krsmanović was born in Sarajevo (Bosnia and Herzegovina) in 1988. She studied dramaturgy at the Academy of Performing Arts in Sarajevo and is currently pursuing her master's degree at the same. Asja started working as a dramaturg assistant, critic, and roundtable moderator in the theatre during her studies and since 2009 she has been one of the most active young dramaturgs in Bosnia and Herzegovina. From 2012 to 2014 she worked as a fundraising and project coordinator for the association Fercera and organized a competition for Bosnian-Herzegovinian playwrights including the production and public readings of the best plays. From 2011 to 2013, Asja worked as a fundraising manager at Art House Cinema Kriterion in Sarajevo. Since 2011, she has been working as a manager of the Competition Program (Feature and Short) and the In Focus Program at the Sarajevo Film Festival, during which time she acquired important organizational and communication skills. Since 2017, she has been the organizer of the Student Film Competition section.
Asja was awarded for the best short play at the 1st Bosnian Drama Slam in 2016. She is a member of the Eurodram Committee, a network for translating contemporary plays into European languages.
She has also worked as an assistant director on several Sarajevo City film projects and short film projects produced in Bosnia and Herzegovina and has written screenplays for several short films.