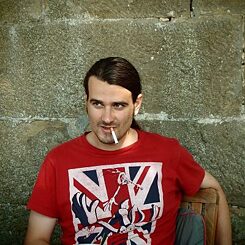 © Matko Botić Dario Bevanda was born in Sarajevo in 1985 and graduated from the Academy of Performing Arts in Sarajevo with a degree in dramaturgy. He has already worked as a dramaturg and playwright on the following performances: The Secret of Raspberry Jam (Sarajevo War Theatre, 2013), The Parliament (National Theatre Sarajevo, Sarajevo War Theatre, Chamber Theatre 55, 2014), The Hen (International Theatre Festival MESS, Youth Theatre Zagreb, BITEF Theatre and Festival, 2014), The Master and Margarita (Sarajevo War Theatre, 2016), Crocodiles (Croatian National Theatre in Varaždin, 2017), Romeo and Juliet (Bosnian National Theatre Zenica, 2018) ), I haven't stopped since morning (Croatian National Theatre in Mostar, 2021). His first full-length play, Pink Moon, premiered at the Bosnian National Theatre Zenica in 2019. For it, he received the Miodrag Žalica Award for the best play at the 18th Festival of Bosnian-Herzegovinian Drama in Zenica, the award for the best play by a contemporary author at the 38th Theatre Games in Jajce, and the Golden Feather Award for the best play by a contemporary local author at the 36th Bosnian-Herzegovinian Theatre Meeting in Brčko. The play was translated into Polish and published in an anthology of Bosnia and Herzegovina's new drama under the title Wake Me Up When It's Over. His most recent drama, Babylon Blues, was awarded Best Play at the Bosnian National Theatre Zenica competition in 2020. Dario also wrote the screenplay for the short film The Pit, which premiered in the short film competition program of the 25th Sarajevo Film Festival in 2019. He is also the author of several theatre, film and music reviews, as well as radio plays and series.