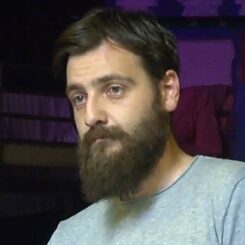 © Benjamin Hasić Benjamin Hasić was born in Sarajevo in 1987 and graduated from the Academy of Performing Arts in Sarajevo in 2017 with a Bachelor's degree in Dramaturgy. He is currently assistant professor of dramaturgy at ASU and is working on his master's thesis on "Dramaturgical Function and the Meaning of the Figure of a Madman in European Comedy". He wrote four plays: Delijan (2016), House (2018), Cube (2019), and A Short History of Stupidity (2020), of which House was shortlisted for best contemporary drama in the Heartefakt competition. He also worked on the dramatization and adaptation of the novel The Master and Margarita, produced by Sarajevo War Theatre in 2016. In 2018, he worked as a playwright on the adaptation of the play Do Lilac Smell in New York? by Miodrag Žalica at Tuzla National Theatre. In 2019, he took over the dramaturgy for the play Your Son Huckelberry Finn based on the novel by Bekim Serjanović at the Tuzla National Theatre.
Since 2016, Benjamin has been writing theatre and film reviews (MESS, Depo.ba, Strane.ba, Filmofil.ba, Muzickazona.ba, Sarajevo.co.ba, Jergovic.com). He wrote the radio play Egotriptih in 2016 and is the screenwriter of the feature film House (2018), supported by the Foundation for Cinematography.
Benjamin participated in various workshops at festivals in Zenica, Bugojno and Belgrade.