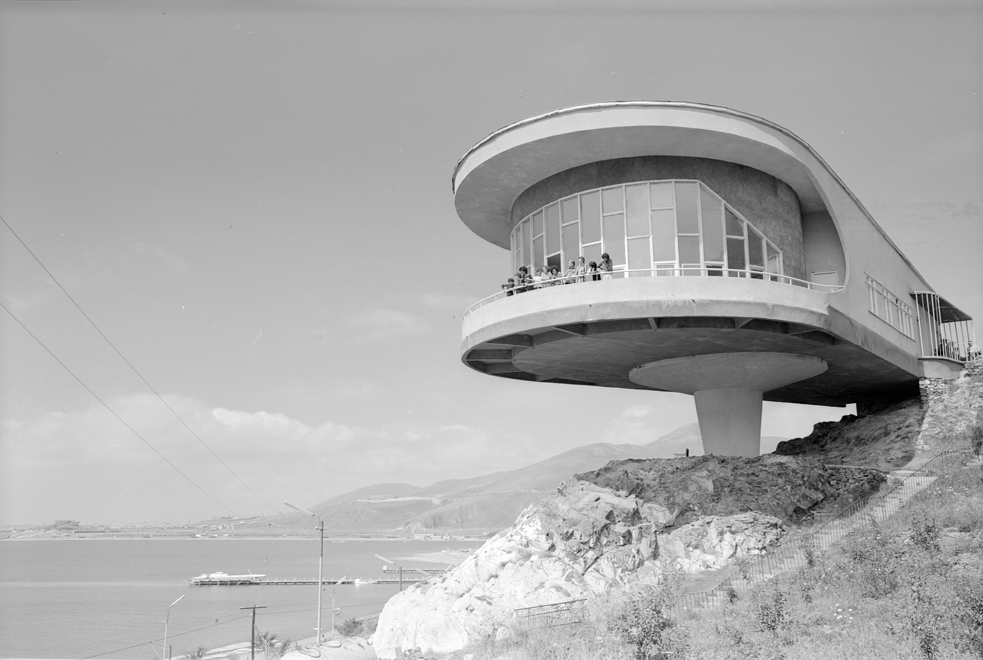 In recent years, the subject of Soviet modernist architecture has become a topic of enormous international interest in professional circles and for the general public. This growing interest is informed by several factors: chief among them is the global discovery of a new, vastly rich strata of modernist architectural heritage that was detached from the Western historical master narrative as a result of the Cold War. After losing a great number of masterpiece buildings from the Soviet period, post-Soviet societies started to realize not only the significance of those buildings as architectural and historical monuments, but also began to acknowledge these structures as important socio-cultural components of their collective identities.

By Ruben Arewshatjan and Georg Schöllhammer

In recent years, the subject of Soviet modernist architecture has become a topic of enormous international interest in professional circles and for the general public. This interest in post-World War II modernist architecture in the Soviet republics was generated due to several important international research projects and exhibitions, such as Local Modernities, an ongoing research initiative that began in 2003; Soviet Modernism 1955-1991: Unknown Histories, a 2012 exhibition at the Architekturzentrum Wien; and Trespassing Modernities, an exhibition at SALT, Istanbul in 2013;  as well as several publications.

This growing interest is informed by several factors: chief among them is the global discovery of a new, vastly rich strata of modernist architectural heritage that was detached from the Western historical master narrative as a result of the Cold War. It has only recently become a focal point for international research, scholarly and popular publication, and an issue of local monument and heritage protection. However, the interest in Soviet modernism is not only coming from the outside; it is significantly driven by domestic interest. After losing a great number of masterpiece buildings from the Soviet period, post-Soviet societies started to realize not only the significance of those buildings as architectural and historical monuments, but also began to acknowledge these structures as important socio-cultural components of their collective identities.

All of which is to say that Soviet modernism has become a popular issue worldwide. It is gaining international attention, and it is an issue, thus far unresolved, in the Russian peripheries and in the post-Soviet republics. The loss and drastic transformations of the urban environments there gradually started to develop public concern. A growing number of research projects initiated by local groups, public discourses on urban topics, and civic activist movements focus on the protection of modernist architectural monuments. Some of them became triggers for new forms of public resistance against the vicious neo-nationalistic policies and of economic dominance over the socio-cultural constructs of today.

This new reading runs parallel with the global interest in the function of architectural modernism in building urban and geopolitical peripheries, but it is regionally even more important for a new understanding of the inner contradictions of Soviet and modern society and the realities of its imperial structure that have been the agents of its corrosion. Through a local reading of the Soviet city, one can uncover a lot about the current, syncretic meanings of successor states’ capitals in a nutshell.
The history and the following transformations experienced by the architecture and urban system of the cities in post-Soviet and post-socialist nations disclose much more complex subjects for considerations that refer to broader cultural and sociopolitical aspects, contradictions, dilemmas and questions of modernist visions of the 20th century in a worldwide context that still remain unanswered.

Being nurtured by revolutionary visions of social utopia, architecture and urbanism of the early Soviet avant-garde were important agents in generating a new lifestyle for the alternative social order. The ideological call for modernization of the USSR in the 1920s led to new typologies for city plans, infrastructure, mass housing, public buildings, and edifices of political representation, for working, celebration and recreation in a radically new and modern language. The diversity of conceptual approaches, discourses that were going on between different architects, architectural groups and communities were expanding not only through the newly formed Soviet republics but they were also embracing intensive exchanges of ideas and practices between European architects and architectural schools (such as BAUHAUS and VKHUTEMAS) that were also inspired by the ideas of the construction of a new life order. Soviet architecture of that time was an inseparable part of global modernist architectural discourse and had a serious impact on its development.

With the gradual shift of the paradigm in Europe and USSR in the 1930s to authoritarian conservative political regimes, the revolutionary visions in arts, cultural life and in architectural developments began to be suppressed and subjected to conservative ideologies. Demonization and crimination of the modernist movement and avant-garde experimentations took place almost in parallel in Germany and the Soviet Union with a reciprocal accusation of pernicious influence coming from one or the other side. Besides being a part of the escalating polarization between different ideological and socioeconomic political systems, the process also  generated a cultural, and in a certain sense civilizational, demarcation between the USSR and the Western world followed by the division of the history proposing specific ideological attitude towards modernity per se. That attitude found its continuation in the Cold War epoch in the domineering perception about geopolitical, historical, cultural division of the world according to the affiliation to advanced and belated modernities/histories.

Although modernist principles of interrupted discourses about a new lifestyle were resumed after 1955 when the architecture of Stalin-era Socialist Realism was rejected, well into the final years of the USSR, economic crisis and dwindling material resources took their toll on architectural production.

The new urbanization was driven by an ideology of scientific and technological progress. It was conceived by local planning offices in each republic and executed to the standardizations of the construction industry. Architects experimented with concepts of international architecture and borrowed from the suppressed legacy of early Soviet modernism of the 1920s. An original Soviet language of Late Modernism rapidly developed.

But by the 1960s, a critical reaction against this policy of the industrialization of space and architecture arose. Architects and local elites expressed their distance from the official canon of Soviet architecture through their search for a regional – or national – identity. Thus, an architectural avant-garde, one that defied the dominant homogenizing politics of the central bureaucracy, was able to form in the republics. Multiple versions of modernism emerged: the local modern and the Soviet-hybrid.

The 1970s brought another paradigmatic shift. Under Brezhnev, Soviet society as a whole adopted a westernized lifestyle. This filtered into everyday life through the decline of the communitarian ethos of Soviet ideology, to which architecture had responded with new and singular typologies – from the pioneer camp to the houses of creativity, from the circus to the wedding palace.

The collective project of building Soviet modernity came to an abrupt end in the early 1990s with the collapse of the USSR. The majority of the utopian projects of this modernity have remained a fragment or failed in the end. Many of the realized structures, forms, and successes that we associate with its concepts have fallen into physical disrepair or have been swept into the tide of negative public opinion during the initial years of post-socialist market economy in the successor states. Nevertheless, Soviet-era master plans and modern architecture remain important agents in the contemporary urban and architectural identities of cities across the former empire, where a young generation of architects, urbanists, art historians and civic activists is arguing for their protection and reinterpretation.