Photographs dot an orange painted wall behind the curved, baroque back of the sofa in Olivia Vieweg’s living room. One features Spock, the first officer on the spaceship Enterprise. Vieweg is a passionate Star Trek fan, and the TV series gave her the central theme of her work, friendship. Like the crew of the Enterprise, her characters have to face the adversities of their surroundings – the former in space, the later on earth in the eastern parts of Germany. The only road to success, she says, is to work together. Though her stories are never without the all-important element of fun.

Vieweg’s love of comics began with Mickey Mouse and Donald Duck before she discovered the fascinating style of Japanese manga. She began creating her own stories as a young child, which she published in anthologies once she got to secondary school, working with publishers like Schwarzer Turm Verlag. Unlike in other countries like France, universities in Germany do not offer degrees in drawing comics, so she choose to study visual communication at the Bauhaus University in Weimar. At university her style shifted more towards the West again, though she has never lost her admiration for the narrative dynamism of manga. In 2012 she submitted Endzeit (Ever After), a graphic novel, as her academic thesis. It tells the story of two young women confronted with rather unusual opponents. 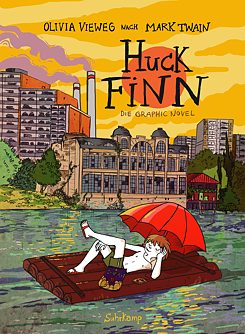 An adaptation of a Mark Twain classic: Olivia Vieweg’s Huck Finn boards a raft on the Saale River with plans to float down to the Elbe River and on to Hamburg. | Photo: © Olivia Vieweg / Suhrkamp Verlag Degree in hand, she began working as an illustrator for children’s books and advertisers and making a name for herself on the German comic market with the adventures of young heroes and heroines. Vieweg has made coming-of-age stories her genre. In 2013, her comic adaptation of Mark Twain’s classic Huckleberry Finn was released. She moved the eponymous hero from the Mississippi River to Halle on the Saale River, and slave Jim became young Jin, an Asian girl forced into prostitution. Together with Jin, Vieweg’s Huck Finn is determined to float on a raft down the Saale to the Elbe River and from there on to Hamburg. Vieweg draws with quick, confident lines, leaving some tableaus like rough sketches, and deftly captures the emotions of her characters in just a few strokes.

A year later, Vieweg drews the story of a woman who suffered at the hands of bullies as a child in Antoinette kehrt zurück (Antoinette returns). After many years, Antoinette returns to her home in the Harz Mountains to exact revenge on her tormentors. Again Vieweg demonstrates that she is not afraid to address dark topics and illustrate them for a young audience: Her books touch on bullying, depression, suicide, alcoholism, prostitution and violence with a nonchalant directness. This does not mean she is not up for a bit of fun, like in her graphic novel Bin ich blöd oder was?! (Am I stupid or what?!) The story takes the reader on a school trip alongside shy, self-conscious Mari, and Vieweg says it is still one of her favourites. 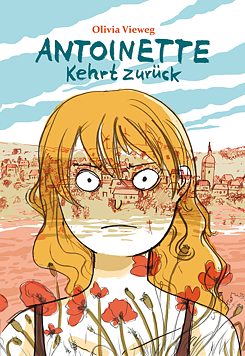 Olivia Vieweg does not shy away illustrating dark topics for a young audience: the central character in “Antoinette kehrt zurück” (Antoninette returns) exacts revenge on her former bullies. | Photo: © Olivia Vieweg Success came rather quickly to the young artist, and as of 2014 Vieweg was drawing a regular comic strip for the daily newspaper Der Tagesspiegel. And she embarked on a new adventure herself, completing the renown Munich Screenplay Workshop and developing a new version of her thesis Endzeit. The script was filmed in 2017 and the cinema release is planned for 2019. Vieweg will also be publishing the screenplay version as an almost 300-page graphic novel.

Endzeit is an apocalyptic zombie saga set two years after the earth has been overrun by zombies, though Vieweg never explains the how and why of this invasion. Only the cities of Weimar and Jena have survived, protected from the murderous hordes by a high fence. Through bad luck and unforeseen circumstances, two young women, Vivi and Eva, find themselves outside the security zone. They are forced to fight their way through the colourful jungle landscapes of the East German prairie - and face fears from their past. It is a story of courage, inner strength and - of course - friendship.

“Everything could still turn out alright.”

Reading Endzeit, it is hard not to draw parallels to the looming global climate catastrophe. Although Vieweg says she resisted “blatant ecological preaching”, it was still intended as a warning: “I think it is important that many more people understand that it is five to twelve. But I also wanted a positive message to resonate: everything could still turn out alright. It’s in our hands.”

Can a person be taken seriously as the author of graphic novels about zombies? Vieweg is very clear that she is not too bothered about that aspect of her work. “Maybe it is a very German thing, this urge to decide who is the most intellectual and who the most boring. I would rather entertain people that make serious art. I don’t care if about a memorial statue that reminds people who I was 300 years after my death. I want people to read my stories today. And if I accidentally produce some real literature along the way, so much the better.” 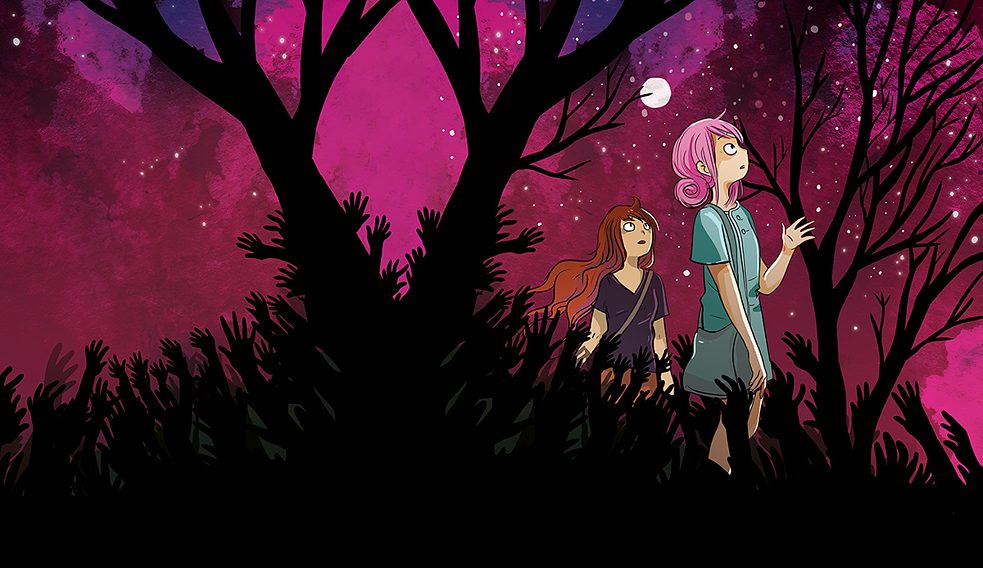 Vieweg’s “Endzeit” script was filmed in 2017 and the cinema release is planned for 2019. | Photo: © Olivia Vieweg / Carlsen Verlag