The Humboldt Forum Architecture Beyond Time

Why was a Baroque palace reconstructed in the middle of Berlin? What are we supposed to think of a new building that reproduces the past in a faithful copy of the original? Author Roberto Sassi attempts to answer this and other questions about the architecture of the controversial museum centre by Franco Stella.

A Balance Between Past and Present

One of the main criticisms the Humboldt Forum has received is that the building is in some respects a betrayal of contemporary architecture. In 2007 the architect David Chipperfield – who was responsible for the design of the James Simon Gallery and the restoration of the New Museum (Neues Museum) – made these comments on the decision to use the Bundestag building for the reconstruction of the Palace: “I would prefer the architect to try and give a current interpretation of this ancient beauty. A modern building with old proportions would be fantastic.” Indeed five years earlier the committee of experts Historische Mitte Berlin had voted for the erection of a building the same height as the Hohenzollern residence, to be precise this was to involve reconstruction of the three Baroque façades designed by Andreas Schlüter and dating from the early 18th century as well as the spacious courtyard named after him. The committee also proposed provisionally incorporating the structure of the castle’s east wing and the Palace of the Republic (Palast der Republik) – the vacant building which formerly housed the GDR Parliament. 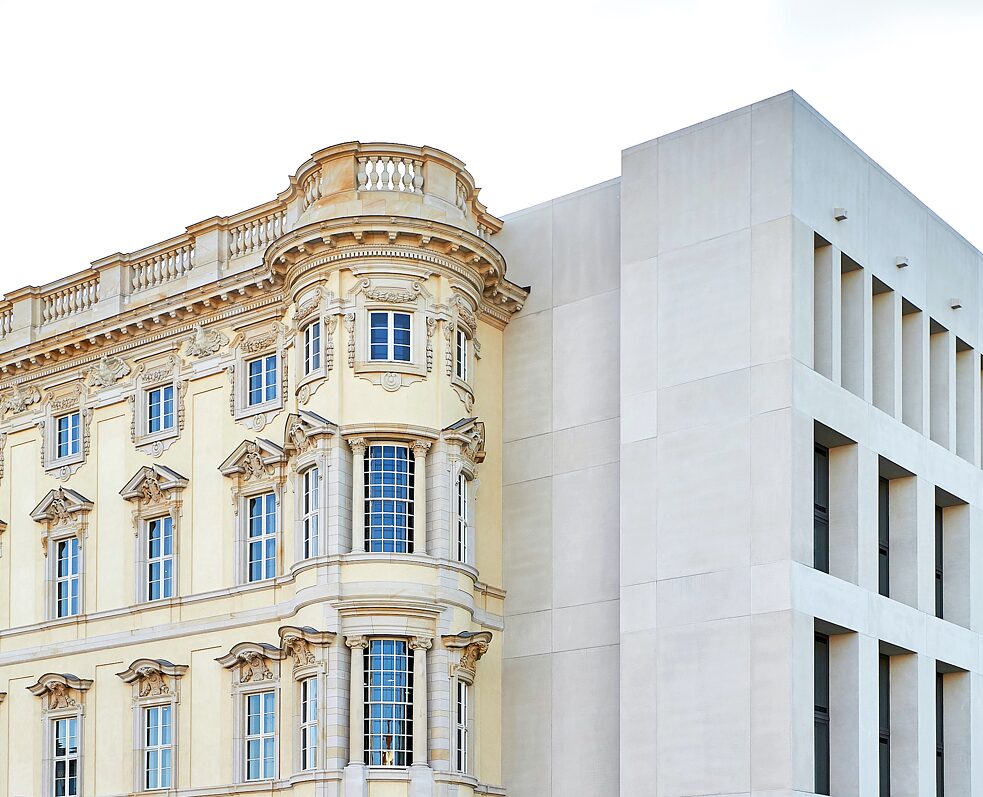 North and east façades | Stephan Falk © SHF Stephan Falk When Franco Stella entered the competition for the Humboldt Forum in 2008, demolition of the Palace of the Republic had long been an official matter and was almost a done deal. Consequently the architect from Vicenza, who was still virtually unknown in Germany at that point, faced a task that was anything but simple: the remit was to design a building on the basis of old photos and paintings that would fit in with the cityscape in the centre of Berlin. But the priority was ensuring a balance between the three historic façades and the new modern façade overlooking the Spree.

The Palace and the Museum Island

Supporters of the reconstruction like to quote author and publisher Wolf Jobst Siedler: “The palace was not in Berlin; Berlin was the palace.” They said this to emphasise the significance of the Palace of the Republic to the history of Berlin – but at the same time it paved the way for an equally compelling counter-argument: the former Hohenzollern residence no longer played a central role in the city’s social and cultural life in the 20th century. But even this objection, despite being justified, omits an important factor: from an architectural perspective the Palace still occupied a central location. You only need to take in the view from the other side of the boulevard Unter den Linden to realise that. 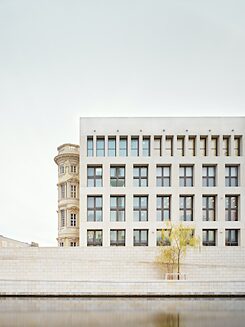 East façade and roundel tower | Alexander Schippel © SHF The Old Museum (Altes Museum), which was built in the period between 1823 and 1828 by Karl Friedrich Schinkel as an answer to the Palace as it were, and in this sense it was positioned directly opposite. The former director general of the Staatliche Museen Berlin, Peter-Klaus Schuster, referred to it as the antithetical palace of the people (“Gegenschloss des Bürgers”). And even if the Ionian columns are reminiscent of the liberal spirit of Ancient Greece and form a distinct contrast with the Baroque façade of the royal residence, the idea is after all to exhibit those very same ancient artworks that used to be on the other side of the street in the Old Museum. In short: Without its huge antithesis, Prussia’s first public museum would never even have existed, or at least not in the form we know today. The same applies for all the other museums on the island, which were without exception built or planned during the Prussian era – with the aim of forming an ensemble that has its own dialectics.

Contemporary Architecture or Not?

Franco Stella’s design has a close relationship with the museums around it. In an article published in the Humboldt Forum's online magazine, art historian Horst Bredekamp explains the extent to which this relationship is relevant not just to the architecture, but also to the perspective and visitor flow, in fact to the city in the narrower sense: the portals from the passage and Schlüterhof courtyard are gateways through which you can see and get to the Old Museum as well as the Old National Gallery. Because of this, Bredekamp invites people to view the building designed by Stella not as a castle or palace, but as a new city district of Berlin with a relationship to the spaces surrounding it. 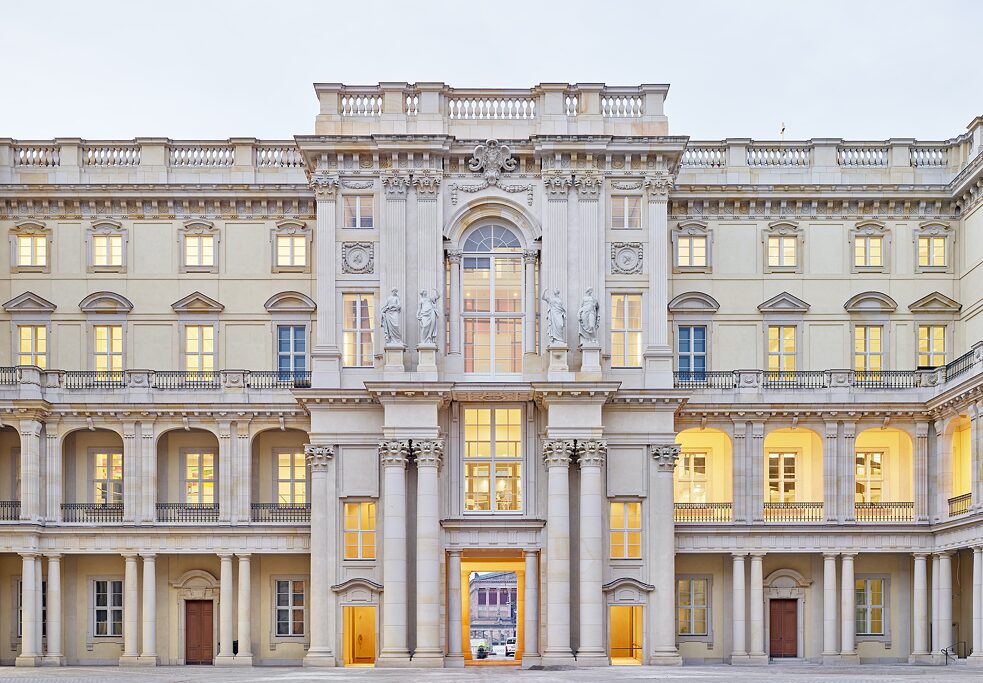 Schlüterhof with a view of the Old Museum and Lustgarten | Alexander Schippel © SHF Of course plenty of imagination is required to appreciate the 2,800 figures and 23,000 sandstone elements of the three Baroque façades or the impressive domed roof with its golden cross as contemporary architecture. The present day is reflected far more in the geometry of the east façade overlooking the Spree, or in the foyer – where Stella managed to accommodate the coexistence of the 18th century portal designed by Johann Friedrich Eosander with the modern, rationalistic architecture of the hall. Some people may argue that it’s not much for a museum centre that claims to play a central role in the city’s future. But is it really a good idea to refer to the traditional categories of past and present to describe the Humboldt Forum? Maybe the building’s trying to tell us that in its own clumsy way: I don’t even know myself which era I belong to. 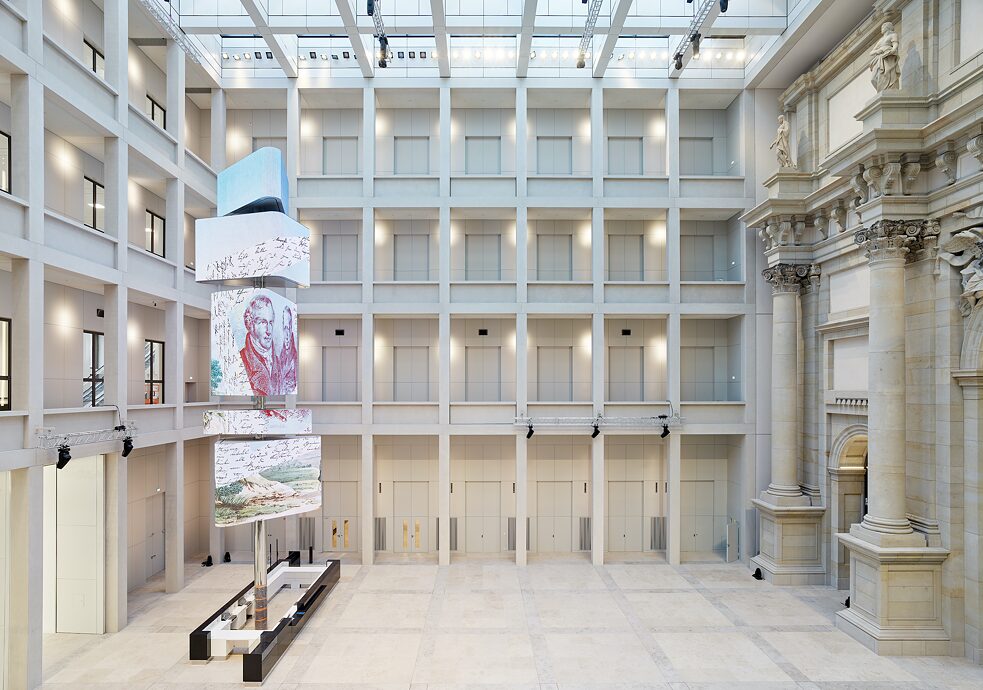