Among the greatest threats to Algeria’s 1,622 km long coastline are irresponsible fishing practices and a complacency about marine pollution, especially plastic waste. HOME Environmental Association in Tipaza is trying to change that.

Algeria is the largest country in Africa, covering a diverse stretch of land that extends from the Mediterranean coast to the sandy dunes of the Sahara Desert.

Despite its 1,622 km long coastline, Algeria remains very little affected by mass tourism and the problems associated with it. But that does not mean its coast is immune to detrimental human impact, such as pollution. Instead of littering tourists, it struggles with disturbances caused by economic activity, such as fishing and waste shipments. Wastewater also remains one of its biggest threats.

Theoretically, there are laws that protect the Algerian coast, but these are barely enforced. The sobering reality is that in industrial zones like Arzew, Skikda, and Ghazaouet, waste is discharged directly into the sea. Not to mention that ships, transporting waste and other cargo to and from Algerian ports, are the frequent source of oil spills and therefore hydrocarbon waste.

One of the most visible types of pollution in coastal areas is solid waste, especially plastic, such as bags and packaging, cans and bottles of beer, pieces of rags, or tires. Over her 35 years of experience as scuba-diver, Samia Balistrou has seen this waste gradually invade the coastline. 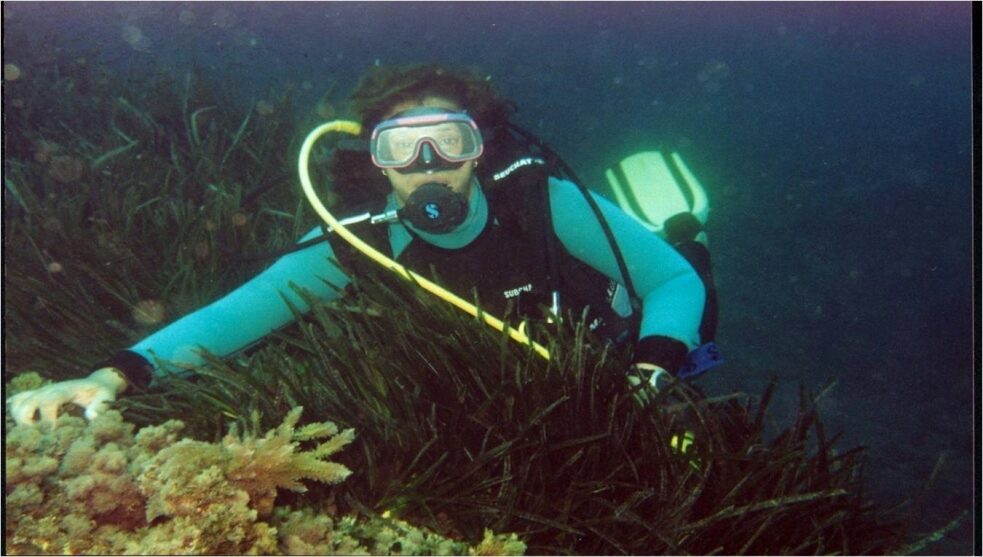 Scuba-diver Samia Balistrou | Samia Balistrou She came to the conclusion that action was urgently needed. In 2015, she founded HOME Environmental Association, based in Tipaza, a coastal city 70 km east of Algiers. “The Association was born to meet an urgent need: the protection of the sea and the coast,” says Samia, who is familiar with the Mediterranean in all its facets and has closely observed the evolution of its environment.

As a privileged witness to an impending ecological disaster, Samia began to raise awareness about the dangers that lay in wait for the sea. She did so through writing and radio broadcasts. She produced and hosted two programmes: one on the environment and the other on the sea, entitled Sawt el-Bahr (Voice of the Sea). Those “received very good feedback but remained without significant impact on decision-makers and the behaviour of citizens," says Samia. Hence, she came up with the idea of an association in which friends of the sea and environment could be united in their efforts to change the way society thinks and acts. HOME was the name she chose for “her baby,” as Samia lovingly calls the organisation, “in tribute to the film by Yann Arthus-Bertrand, which affected me a lot.”

In one of her live broadcasts on the radio, Samia interviewed a fisherman who complained that he was recovering more and more plastic from his nets. To the question of what he was doing with the waste, the fisherman replied simply: “I throw it back into the sea!” Samia remembers how her blood ran cold at his response, since it was “indicative of a general lack of awareness of these workers” concerning an environment that was so vital to their own lives. She realised the urgent need to make them aware of the importance of protecting and preserving this environment, which provided for their livelihood and that of their children. The solution was sustainable fishing, which meant the adoption of responsible and environmentally friendly practices.

HOME thus launched the project “Responsible Fisherman,” which aimed to sensitise those who “exploited the sea” to the aggressions they presently subjected it to, such as overfishing through the use of dynamite and driftnets, trawling and purse seining, and non-compliance with periods of biological rest. Fishermen were to learn about the damaging effects of plastic, which, once caught in the net, should be collected and not ejected back into the water. They were to become the first defenders of the very marine resources that guaranteed their survival.

HOME Association started by organizing a large-scale information day, inviting the fishermen of all five fishing ports of Tipaza province, officials from Tipaza’s Directorates of Fishing, the Environment, and Tourism, and from town halls, scientists from the National Coastal Commission, the National Center of Research and Development of Fisheries and Aquaculture (NCRDFA), and the National School of Marine Science and Coastal Planning (ENSSMAL), as well as the media. It then conducted training on “sustainable fishing” for sixty fishermen, selected equitably from the five ports, following their registration on the HOME Facebook page. 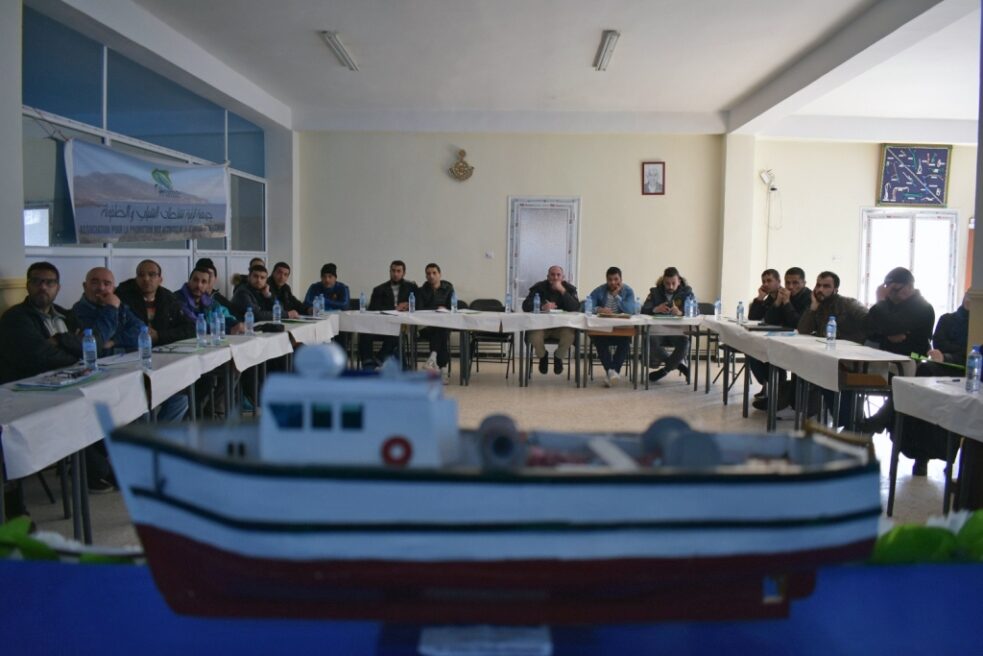 HOME conducted training on “sustainable fishing” for sixty fishermen, selected equitably from the five ports | Samia Balistrou HOME conducted three three-day training sessions for 20 beneficiaries each. The workshops provided the fishermen with the opportunity to discuss in depth the difficulties of their profession with representatives from government and science – the three pillars of the sector. Based on their exchange, a “Responsible Fisherman’s Charter” and the “Guide to Good Practice” were developed, printed in large quantities, and distributed to those concerned.

Scuba-diving sessions, organised by HOME Association with the support of UNDERSEA Diving Centre Tipaza, attracted the greatest interest. More than eighty people experienced their “diving baptism,” as they discovered, for the very first time in their lives, marine life in its natural environment.

At the end of the project, which lasted 18 months, HOME Association signed an agreement with the Chamber of Fisheries and Aquaculture (CAPA) with a view to lasting relations to support this project and its expansion to the whole sector.

“The authorities did not trust us to carry out this mission […].”

Samia says that when the project was launched, they did not in the least anticipate the scale it would eventually reach. “The authorities did not trust us to carry out this mission. Difficulties appeared from the very beginning, when we had to go on a search for fishermen, ship and company owners. Those we met did not show much interest in the project. In addition, there were major absentees: the coast guards who enforce the law governing this activity and the port authorities, which could have played a major role in the handling of plastic waste recovered by fishermen in their nets. However, we had the support and the presence during the closing ceremony of the representative of the General Directorate of Fisheries [and Aquaculture], the directors of the NCRDFA, the Chamber of Fisheries, doctoral students, [and others].“

Besides the great encouragement that this broad interest has given HOME Association, Samia points to another significant gesture that has recently come from the Directorate of Fishing and Fishery Resources (DPRH) of Tipaza in the shape of an invitation to speak about the project to officials from Algiers and Boumerdes.

Currently waiting for their feedback, HOME Association hopes to roll out their concept in other provinces very soon. There is no question about its urgency and importance, “at a time when the environment is deteriorating at an incredible speed far from the gaze of decision-makers, who generally content themselves with making positive assessments to satisfy public opinion.”