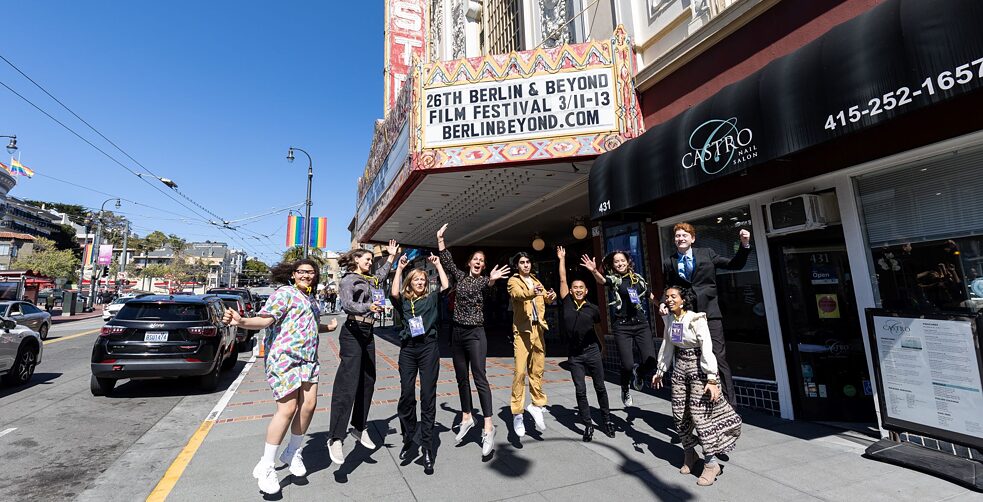 The Goethe-Institut’s Step Into German program and the Berlin & Beyond Film Festival are seeking students from across the US, Canada, Mexico, Central America, and the Caribbean (ages 14-18) to participate as jurors in the tenth annual program of Youth 4 German Cinema. This offers the opportunity for young people with an interest in German arts and culture to come to San Francisco and be part of the 27th Berlin & Beyond Film Festival in March 2023. Three applicants will be selected.


2023 Program Application
Before the Film Festival
Participants will form the Youth 4 German Cinema jury. They will screen selected German films online (with English subtitles), engage in discussions, and choose one film to be shown at the festival.

As Part of the Film Festival Experience:
Participants will: Participation in this program will not only make a great addition on the student’s resumes and college applications, it will also allow students to learn the fundamentals of film analysis, film production, and how to network and make connections for future endeavors.

Important Dates: Travel & Accommodation:
A very exclusive and grand opportunity: Each participant will be provided roundtrip airfare to San Francisco, accommodation and food.  *Please note that due to the global COVID-19 pandemic, unforeseen travel restrictions and health and safety measures might occur. **Please note that in case regulations around COVID-19 change, we may have to reject applicants who are not vaccinated against COVID-19.

Youth 4 German Cinema takes high-school students backstage for a glimpse into the workings of the international film festival Berlin & Beyond. In doing so, students are introduced to the German language cinema landscape and learn about filmmaking, film criticism and international films as a whole.

Chosen from a pool of applications from across the US, Canada, Central America and the Caribbean, Youth 4 German Cinema allows select high-school students to participate in and to go behind the scenes of an international film festival; to meet industry professionals; to participate in artistic workshops; and to increase their cross-cultural awareness. Finally, they also help select the two winning films which are screened at the festival for hundreds of visiting students from across the San Francisco Bay Area and Northern California.