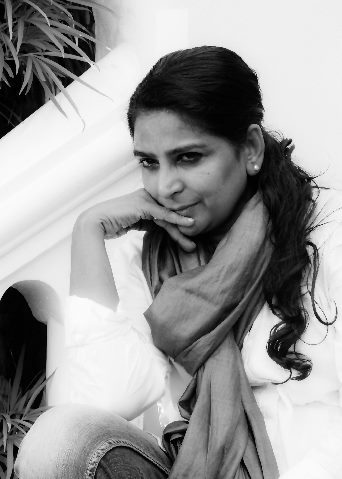 Foto: Goethe-Institut / Roi Sinai
Anitha Thampi was born in 1968 in Kerela. She is a Malayalam poet with two collections of poetry to her credit. Her first book, Muttamatikkumbol (Sweeping the Courtyard), published in 2004, was chosen as “the best poetry book of the year” by the influential Malayalam newspaper, Mathrubhumi. Her second collection, Azhakillathavayellam (All that are bereft of beauty) was published in 2010 after a span of seven years. In 2007, her Malayalam translations of Australian poet Les Murray were published in a bilingual edition.

She has been translated into English, French, German, Swedish as well as various Indian languages such as Tamil, Kannada, Bengali, Marathi, Hindi, Assamese, Oriya, Gujarati etc., and her work has appeared in various journals and anthologies.

Born into a progressive political family, Thampi was the eldest of three girl children and describes her growing years “against the rural background of Central Kerala, the green expanse of which turned into crowded towns even as I grew up”. This still unfolding transition, she says, has left a deep impact on her work.

The dynamic tension between “the self and the universe, within and without” –the individual’s subjective consciousness against a vast impersonal expanse of external reality – lies, says Thampi, at the heart of all her poetry. She currently resides in Mumbai and Thiruvananthapuram