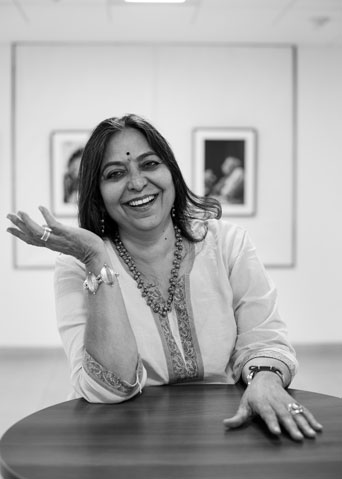 Foto: Goethe-Institut / Vivek Muthuramalingam
Anipindi Jayaprabha was born in Nagapur, India. She did her Masters in Telugu Literature and acquired a Ph.D. degree from Osmania University, Hyderabad and a post graduate course in Theatre. Jayaprabha started her journey as a poet in 1984 with her first collection of poems titled “Yuddhonmukhamga” (Towards War).

It was her second book of poems in 1988 “VaamanuDi MooDo Paadam” (Third foot of Vamana) that created history of sorts by its path breaking poetry, which later came to be called feminist poetry. This book received critical appreciation and commanded a wide readership. Two poems from this volume viz; ‘chupulu’ (Looks) and ‘Pytani tagaleyyali’ (Burn the saree) have been translated into English and many other Indian languages. These two poems became trend setters for feminist poetry in Telugu that emerged and flourished during the 1990s. Since then, Jayaprabha has produced five more volumes of poetry 1993. Her poems have appeared in national and international anthologies like Oxford University Press, Penguin India, Sahitya Akademy, National Book Trust etc .

A special mention has to be made about her love poems - “Unforeseen Affection and Other Poems” by Penguin India, 2005; a bilingual edition in Telugu and English.

Jayaprabha had produced six volumes of prose beginning with “Bhava Kavitvamlo Stree “ (Woman in Telugu Romantic Poetry ), 1988. It earned her accolades from readers as well as scholars. It was also prescribed as special reading in Bangalore University for few years. “Naalugo GODa “( Fourth Wall ) , 1991 was a study of 50 years of Telugu theatre (1940-90 ). It is a thoroughly revised version of her Ph.D. thesis and has proven to be one of the most important reference books on Telugu theatre.