In the past week, journalists Zhang Zhuo and Ren Wu from “The Paper”, and Lin Qiuming from “People”, encountered many people from outside of Wuhan who were now detained in the city due to the lockdown. Their reasons for being in Wuhan were varied: some were returning workers, hoping to earn money; others were here for medical care; and some were just in Wuhan to catch a connecting bus or train. The following three stories were told through a series of interviews by Zhang Zhuo, Ren Wu und Lin Qiuming.

28-year old Wang Tianming from the city of Tianmen tried breaking out of the Wuhan lockdown in order to go home, but he was stopped at the river near the Hanjiang Bridge.

Tianmen is about 100 kilometres from Wuhan. Wang Tianming had been working in Wuhan as a scooter delivery worker for the past year. On January 10, when his rental agreement was up, Wang Tianming travelled home for the Lunar New Year. He came back to Wuhan early, on February 1, in order to return to work. But he was unprepared for the circumstances that awaited him. The electric scooter he had parked outside of his rental unit was gone. His landlord refused to renew his lease, and Danke.com and other apartment rental websites were suspended until further notice. Work, of course, was another problem altogether. Wang Tianming couldn’t find anywhere to stay other than a hotel room near the Hankou train station for 50 RMB a night. He stayed there until February 23, spending all of the 4000 RMB he’d had in his pocket. That’s when he decided to walk home to Tianmen.

Obstacles confronted him at every turn. Along the way, he continuously switched routes, and alternated between using the bike-share Mobike and walking by foot. After travelling for an entire day, Wang Tianming finally reached the Hanjiang Bridge at the intersection of Wuhan and Hanchuan. Here, he was faced with another predicament. Crossing the river by foot appeared to be the only way out. It was already 11 p.m. Wang Tianming set down everything he had been carrying, and stood silently by the river, steeling himself. 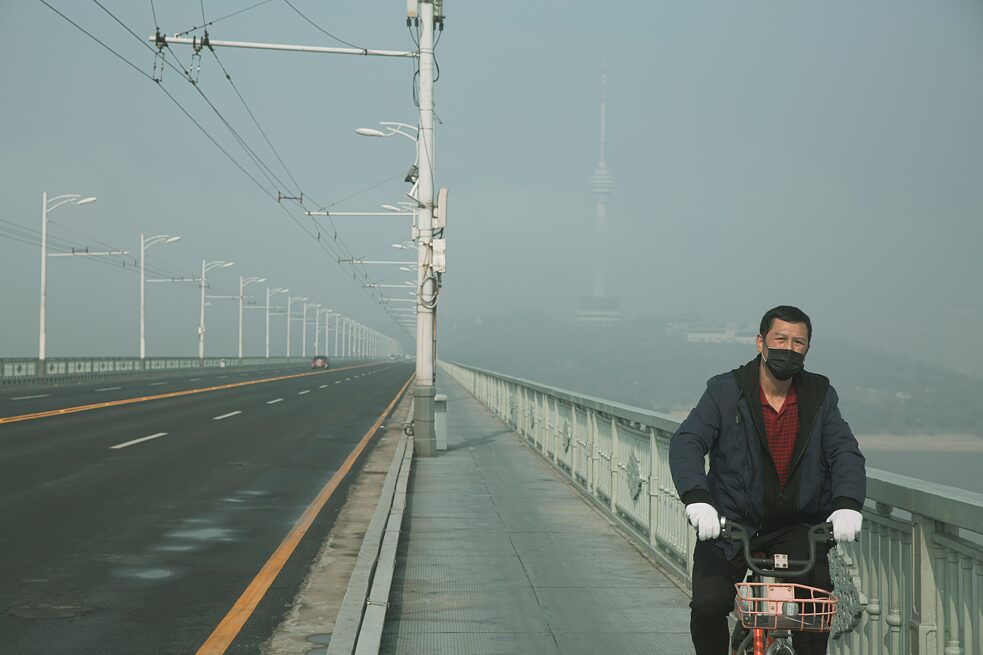 © Goethe-Institut China 2020 The on-duty police officer stationed on the bridge spotted him. “Even if you had swum across, there would have been dozens of other barriers awaiting you,” the officer said. Wang Tianming thought this through for a moment, and decided to give up. A local police officer came to pick him up, and brought him to a shelter. Wang Tianming’s attempt to break out of the city had ended in failure.

Chen Xin had come to Wuhan from the city of Xianning for medical care.

Her four-year old daughter was running a fever of 40.7°C. Still in their pyjamas, Chen Xin, with her husband and mother, rushed to bring her daughter to a doctor. At the hospital in Xianning’s Jiayu County, the doctor said Chen Xin’s daughter most likely had pneumonia, and transferred them to Wuhan. They drove to Wuhan on January 20, and at the Wuhan Maternity and Child Heath Care Centre, a diagnosis of sepsis was returned. Chen Xin’s daughter was then checked into the ICU and scheduled for a lumbar puncture. By Lunar New Year’s Eve, January 23, the four other patients who had been sharing Chen Xin’s daughter’s hospital room had all been discharged. Although the lumbar puncture procedure had been performed, Chen Xin’s daughter’s fever was not subsiding. She now required machine-administered antibiotics, which the hospitals in their hometown of Xianning was not equipped to provide.

On January 29, the doctor brought up the risk of cross infection if Chen Xin’s daughter remained in the hospital room. The next day, the four of them moved out, but soon discovered that no hotels were able to take them in. They made calls to the Mayor’s Hotline, the Transportation Authority, the Epidemic Prevention and Control Centre, the Community Committee—but they were simply running in circles. Nobody was giving them helpful answers. That night, they slept in the car.

Finally, someone on Weibo caught wind of Chen Xin’s family’s predicament, and offered the four of them a vacant apartment to stay in for the time being. But more bad news came from home. Chen Xin’s father, who was now home alone in Xianning, suffered a sudden heart attack. He had called an ambulance, but once the Community Committee arrived, they determined that he was a visitor, whose domicile was Guangzhou. Because he was only here temporarily to visit family, he did not fall under their jurisdiction of care. Chen Xin’s father had nowhere else to turn, and simply medicated himself at home. Chen Xin’s grandfather, too, had just completed heart bypass surgery before the New Year, and was also at home, hooked up to oxygen. Fearing cross infection, both men avoided going to the hospital, and relied on neighbours for meals.

The end of the lockdown is nowhere in sight. A reunion for this family of six seems similarly distant. After being stranded in Wuhan for over forty days, Chen Xin’s daughter has sprouted two bottom teeth.

Xu Qiang was on his way back to the city of Yiwu on January 23, and had intended to stop in Wuhan only for his train connection. The train was scheduled to depart at 6 p.m. He has now been stranded in Wuhan for over forty days.

48-year old Xu Qiang is a businessman. After graduating from junior high, he worked on the assembly line of a clothing factory for over a decade. In 2016, using savings and loans, he opened up a small shop in Yiwu selling wireless products. In the beginning, he was pulling in ten or twenty thousand RMB each year, and so he felt comfortable taking out another loan of 30,000 RMB to purchase a condo unit for his son. But in 2018, business started going downhill. Last March, he was cheated out of a payment for a shipment of goods, and in May, flooding from heavy rains damaged the inventory of mobile phones in his shop, resulting in a loss of more than 100,000 RMB. Finally, when the shop went bankrupt, Xu Qiang lost an additional 1,000,000 RMB on top of everything else. Thus, he was forced to start from scratch and search for work, again, wherever he could.

Being stranded now, in Wuhan, was salt on the wound.

For the first eleven days, Xu Qiang stayed at hotels. Rates shot up from 100 RMB to 200 RMB. He moved four times to four different hotels, and soon, he had almost spent all of the 2,000 RMB he’d had with him. When he was down to the last 200 RMB, Xu Qiang began roaming the streets. Many supermarkets had closed. When he encountered one that was open for business, he’d buy a package of instant noodles and eat it uncooked, straight from the bag. He allowed himself only one bottle of water per day, which cost him 3 RMB. Later, he resorted to drinking non-potable tap water.

As government restrictions changed and tightened, supermarkets began accepting only collective purchases from Community Committees, and refused entry to any individual customers. Like Wang Tianming, he also considered trying to walk out of the city on foot. But he was cold, and hungry, and after one attempt, he gave up the idea. He had with him only three over shirts, and three thin pairs of pants. Even when he put on all of these clothes, he could barely stand the cold at night. February 15 was the coldest day of all. It was snowing in Wuhan, and temperatures dropped below 0°C. 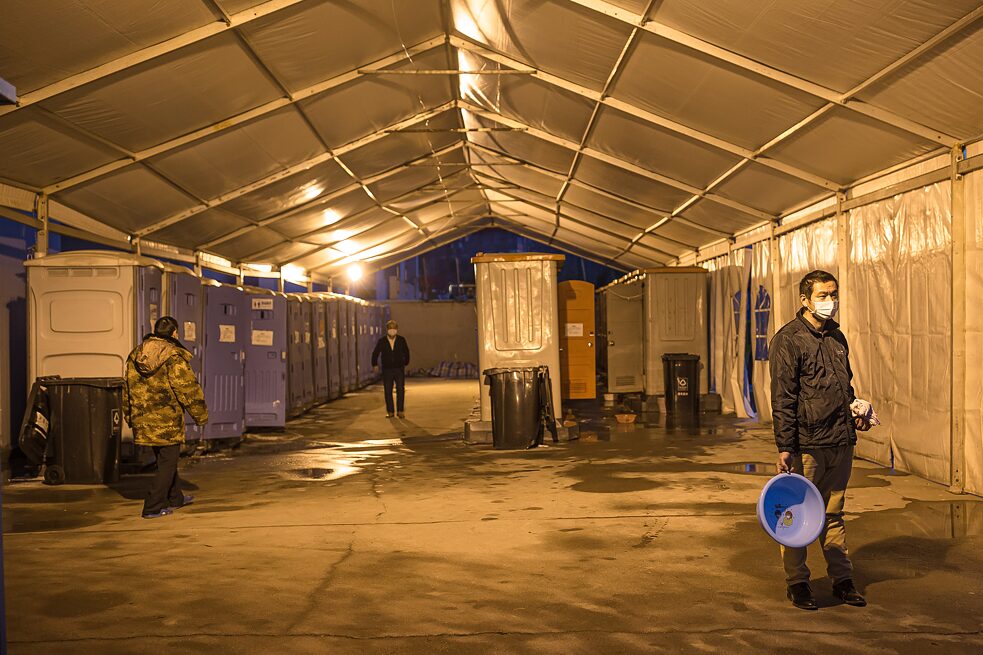 © Goethe-Institut China 2020 During this time, Xu Qiang slept anywhere he could: bus stations, parks, movie theatres, basements. He found that the park benches at Yellow Crane Tower were the most comfortable, and one could even wash up in the bathrooms. When his phone ran out of power, he used the charging outlets at ATM machines. The power was weak, and it would take a whole afternoon to charge his phone. The police, food delivery workers, sanitation workers, and custodians all walked by as he sat there. But nobody paid him any mind.

On February 24, Wuhan’s Epidemic Prevention and Control Centre issued two notices. Notice No. 17 was released in the morning, stating that those out-of-towners stranded in Wuhan would be allowed to leave the city. Three-and-a-half hours later, Notice No. 18 was released, which nullified Notice No. 17. On March 5, the city of Wuhan enacted a new policy targeting the struggling out-of-town population. Those who were stranded in Wuhan for the following reasons—visiting relatives, medical care, transportation connections, work, or recent release from prison—were allowed to apply for financial aid in the amount of 300 RMB per day, for a maximum of ten days.