An article by Irina Radu
The memory of the words: Ukrainian women write against the war

When many women and children fled Ukraine in the first few days after the Russian invasion, the writers Victoria Amelina and Chrystyna Nazarkewytch decided to stay in Lviv to write poems or essays about their experiences.

Since the escalation in the Donbass region in 2014, many Ukrainian authors have been publishing literary works in the form of poems, essays or diaries that describe the ramifications of a deadlocked conflict with no foreseeable end. Since the day of the invasion on February 24, 2022, Ukrainian literature has experienced a boom. In a current plethora of opinions, the works created in the scourged Ukraine serve as embodied visions of events that will live on for decades to come. The increased number of translations from Ukrainian promotes international reception. "Write, if you can, please!", Victoria Amelina encourages her fellow Ukrainian writers on a social network. 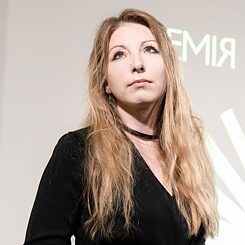 On the day of the incursion, February 24, 2022, writer Victoria Amelina, born 1986, was at the airport in Marsa Alam, Egypt, where she was due to board a plane to Lviv. Two days of trying to return to her homeland followed after she was told by Egyptian airport authorities that she could no longer go home. After a stopover in Kraków, where she left her son, she finally arrived in Ukraine.

Victoria Amelina's works reflect sequences from her voluntary service in cities such as Lemberg, Kyiv, Hostomel and Irpin. The echoing interiors of the warehouses, the distribution of combat helmets and medical supplies to the army units, or the driving of victims from the invaded East are reflected in their spontaneously written verses. "Air raid sirens across the country/Feels like they bring out everybody" - this is how her recently published poem "Sirens" begins. "But aim just at one person/ Usually at the one on the edge/This time not at you...". "The danger is always here in Lemberg", says Victoria, but she's not afraid.

As a writer and feminist, she had many causes to support in times of peace, such as the fight against global warming or women writers in Europe. "Now I'm a citizen of a state that's under attack," she says.

Before the combat operations, Victoria was primarily a novelist and essayist. Now she writes more poetry because "that's what war leaves you". "The sentences are as short as possible, the punctuation a redundant luxury, the plot unclear, but every word carries so much meaning. All this applies to poetry as well as to war”. Amelina's native language is Russian, but all her works were published in Ukrainian.

You can't write a poem about medical care or a drone. However, among other things, she also wrote a poem about refugees she met as a volunteer - it's called "A Comeback Story". In this poem, Victoria tells the story of a girl named Vira, who ran away from home and took nothing with her except memories of her house and the hope of returning there one day. "Your house behind your back/is getting smaller/to save itself". The house transforms itself into an apricot pit from last year, a mussel from Crimea, a sunflower seed or a button from her father's uniform. "And then the house fits into your pocket/ ... /You should pull it out/when it is ready/in a safe place/Little by little, the house will grow".

Victoria always drew attention to the remembrance of Ukrainian history, as in her 2017 novel “Dom's Dream Kingdom”, which explores the Soviet past of her hometown of Lviv. The central symbol of the book is the home of the Jewish writer Stanislaw Lem. An old Soviet military pilot, who was living there, refused to talk about his childhood memories, including the Holodomor - the genocidal famine of 1933 - and the Nazi occupation. She is best known for her 2014 debut novel “The Fall Syndrom: about Homo Compatiens”, which deals with several social upheavals of the 21st century, among which that of Cairo's Tahrir Square in 2011 and Euromaidan in 2013/14.

The writer believes that the Russian aggression of 2022 made people around the world show more solidarity. "But eventually everyone gets tired, you can get used to the war crimes in the middle of Europe. Then why did we read all these post-war memoirs and novels? This affects how we all live in Europe and what it means to be European. If we don't do anything to stop war crimes, who are we?"

"The materiality of the fabric that I cut into even strips makes me think that the war is real," says Chrystyna Nazarkewytch in her essay "I weave camouflage nets in the Lviv Powder Tower," published for the first time in the 71st edition of the Magazine for Literary Translations from Romania (Revista de traduceri litarare). She cuts mountains of clothes, bedding and bolts of fabric. The remnants of fabric are then woven into large camouflage nets by young students from the Lemberg Art Academy. The townspeople are encouraged to participate and bring textiles in shades of brown and green to the medieval Powder Tower in Na Valakh Square. Chrystyna Nazarkewytch is an essayist, lecturer at the Institute for German Philology at the National Ivan Franko University in Lviv and translator of Ukrainian literature into German and vice versa. She decided to stay in Ukraine to volunteer.

Essayist and lecturer Chrystyna Nazarkewych writes about her experience as a volunteer in Lviv's Pulvertower © Privat "Camouflage nets are wartime works of art," says Nazarkewytch. Several people work along with her, most of them women, many of whom come from areas where heavy fightings are taking place. 57-year-old Nazarkewytch always remembers a slogan from the time of the 2014 Revolution of Dignity "You are a drop in the ocean". "It doesn't mean I don't mean anything. On the contrary: it means that together we are a mighty force”.

"No one really believes that western Ukraine will be left alone," says the essayist. She lives near a military church in Lviv, and she describes how there have been repeated funeral masses for fallen soldiers and officers in this place in recent times. "One hears a military band and church bells and one seethes with powerlessness, the impossibility of saving brave people". But these events, which create such a complex picture of reality, serve as a source of inspiration for Nazarkewytch.

"Today, when Ukrainian poetry is translated into other languages, it means that the world is listening to us, not just the news about us," says Victoria Amelina. The last 30 years have been about bringing back national identity, so she started speaking Ukrainian. “My grandfathers and grandmothers were plagued by hunger as children in 1933 – essentially because they were Ukrainian peasants, spoke Ukrainian and were willing to be free. In the 1930s we had a whole generation of talented writers executed by the Soviet-Russian regime - the executed Renaissance". Whether there will be another executed Renaissance is a question that worries Victoria Amelina constantly. In this regard she wrote the essay "Cancel culture vs. execute culture". "I understood that my language was destroyed by violence," she admits. She believes that the invasion will accelerate the transition to a more conscious use of the Ukrainian language in written and oral expression.

"The fact that Ukrainian culture is now suddenly enjoying attention is a kind of guilty conscience on the part of the West, which had ignored this culture for decades," Chrystyna Nazarkewytch thinks. "For 20 years now, whenever a German translation of a Ukrainian text has been published, the publication has been greeted with an almost identical expression of astonishment at a large country in Eastern Europe or a former imperial-royal crown land of which one actually knew nothing."