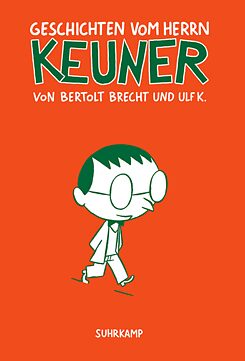 © Suhrkamp „Mr. K. was asked what he was working on. Mr. K. replied: ›I’m terribly busy – I’m preparing my next mistake.“ This situation is typical of the Brecht’s stories of Mr. Keuner: a simple, everyday question provokes a surprising, unusual answer. How can Bertolt Brecht’s playful alter ego Keuner be presented? Ulf K., the poet of the German comics scene has achieved this challenge.

Ulf K. (* 1969 Germany) studied in Essen and Paris. His works have also been outside Germany, for instance in Spain, Portugal, France, Sweden and the USA.

Bertolt Brecht (1898 - 1956) was one of the most influential theatre practitioners, playwrights, and poets of the 20th century.