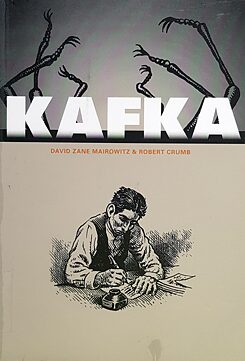 © Reprodukt Kafka - one of the most important authors of world literature. David Z. Mairowitz, together with Robert Crumb, created an aesthetically convincing biography of the Kafka's work. Robert Crumb's drawings are inspired by the German Expressionists, especially Georg Grosz and Otto Dix.

The book includes summaries of some of Kafka's great stories, such as The Judgment, The Burrow, Metamorphosis, The Castle, and more. It serves also as an introduction into Kafka's life in Prague a hundred years ago. The comics touches on Kafka's difficult relationship with his father and his ambivalent relationship with everything physical and sexual; it also ibtroduces into the cultural and historical context of Kafka’s life time. - Highly recommended.

Robert Crumb (* 1943, Philadelphia) is one of the pioneers of American comics. He became internationally known through Fritz, the Cat and Mr. Natural. Throughout his life he was a controversial artist who relentlessly exposed his own as well as the social abyss. Mairowitz said of him: “Robert Crumb is just as afraid of women as Franz Kafka was. If Crumb portrays himself as a small and trembling imp before the powerful women with big asses, then he makes himself as small as Kafka makes himself small in his works." (translated quote from Tagesspiegel 14.05.2013)

David Zane Mairowitz (* 1943, New York) has lived in Europe since 1966. He has received numerous awards for his radio plays, produced all over Europe.