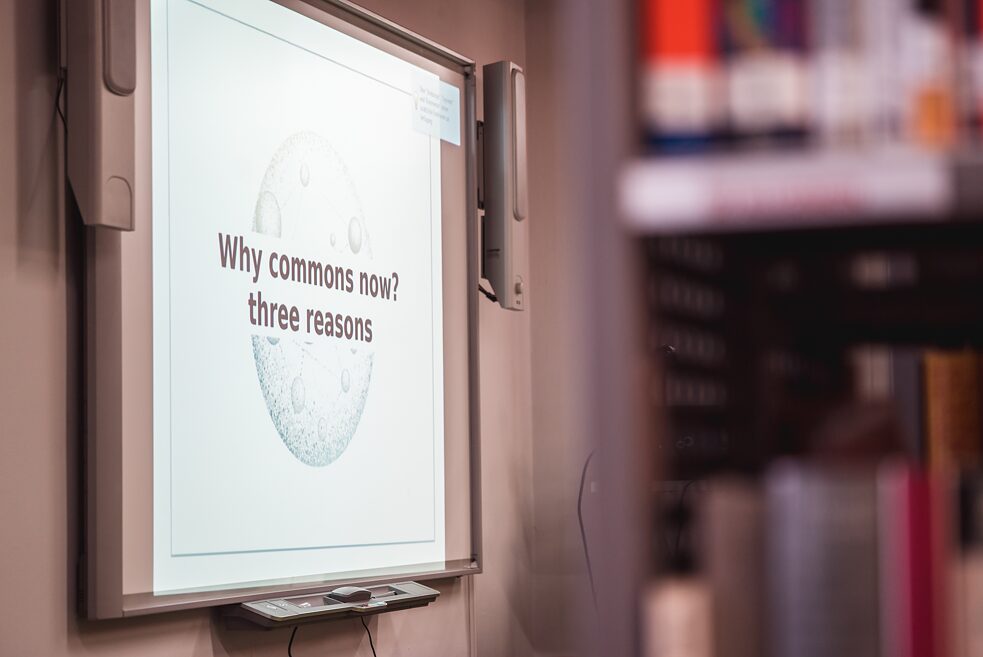 The idea was to ascertain how commoning can be turned into a fertile practice for cultural projects, library work, and educational formats, while at the same time contributing to the creation of “commons” – in other words, products, resources, and services that are jointly produced, maintained, and used. The workshop focused on the relationship between the commons and knowledge, the commons and the environment, and the commons and the city.

“The world of the commons should not be thought of as a land of milk and honey but as a picnic to which everyone brings something.”

Silke Helfrich from the Commons Strategy Group introduced the topic, illustrating its breadth and scope and making a passionate plea for the commons as a practice of thinking and acting. She explained that commoning calls for a different way of looking at the world – one that overcomes the idea of separating state and market and reflects critically on the role of private property, hierarchies, authority, and consumption in our everyday practices.

Tomislav Tomašević from the Institute for Political Ecology in Zagreb used examples from post-Yugoslavia to show how the “Commons in South East Europe” (the title of his study) works. Our colleagues from the Goethe-Institut in Serbia considered whether the self-organised initiatives in the former Yugoslavia might be an example of commoning? Tomislav amplified this idea by explaining the concepts of common property and communal action: in his view, these notions are derived from gmajna, which comes from the country’s Habsburg past, vakuf, from its Ottoman heritage, and finally zadruga, from the autochthonous tradition of the extended family as an economic community.

This gave a clearer picture of the historical origins of the commons in South East Europe, but how can we understand and practise commoning today? Commoning suggests that our current political economic system teaches antagonistic forms of competition, self-interest, and exploitation, which in turn have an impact on our everyday behaviour: pollution, the wasting of resources, and the loss of collective engagement with one another are some of the outcomes that the commoning movement views with concern.

The commons is an alternative model that embraces new technologies in order to live out alternative values: self-organisation, sustainability, solidarity, collectivity, and democracy.

Xenia Koliofoti reported on her work in the self-organised Embros Theatre in Athens, which offers a stage to comparatively unknown and marginalised artists. In addition to the use of digital technologies to facilitate organisation and announce upcoming events, Xenia also explained the limitations and conflicts inherent to consensus-oriented cooperation. Dimitris Soudias, for his part, discussed how the library at the Goethe-Institut Athen is trying to create spaces of communing – with seminars on openness and information literacy, open source library systems, and children’s learning workshops on the commons – while also fulfilling the demand for forms of decision making that are as democratic as possible in collaborating with project partners and colleagues in the library team.

Stavros Stavrides from the National Technical University of Athens started the second day with an explanation of the urban commons. Using case studies from Argentina, Mexico, and Greece, he left no doubt that commoning is essentially concerned with questions of power and property that require tough negotiation. Iva Čukić showed that this process can also be creative and playful with her report on the occupation of buildings in Belgrade, which have now become an active cultural centre. The very name of the group, Ministry of Space, is intentionally transgressive: there is no such ministry, but a number of government agencies have been taken in, it would seem, and are supporting the activists in their fight for a location in the centre of the city. A success story of recapturing public space at a time when more and more of it is being sold off to private investors. The Goethe-Institut Belgrade also played a role in this story, and this highlighted one possible course of action for a cultural institute: commoning initiatives provide support within the framework of what is legally permissible.

Alekos Pantazis reported on the relationship between the environment and the commons from an initiative in rural Greece, where farmers in the open lab Tzoumakers are working together to produce implements for cultivating the fields. This communal activity has established a sense of cohesion that offers practical advantages and encourages people to think about the economic conditions of agricultural production. These conditions can change, as can the tools that are used. And what cannot be changed (or repaired) does not belong to you. Alekos explained how this movement is propagating in European networks and how even wealthy farmers in the USA are fascinated by the idea. Modern agricultural machinery is increasingly designed like cars, smartphones, and laptops: “black boxes” that are less and less amenable to repair. In addition, the big companies behind these products are constantly siphoning off user data with the help of tracking technologies and personalisation options. In this way, “users” are becoming ever more dependent on particular companies – and ultimately they are being turned into the product itself: in the form of a bundle of data.

Hugo Mattei and Alessandra Quarta from the University of Turin presented the environmental consequences associated with digitalising the world. The creation of server farms for cloud services and search requests have generated a huge carbon footprint. To counteract this, Mattei argues that the commons should be regulated by statute, as is already partly the case with Italy’s water supply. Alessandra Quarta presented Generative Commons, a project that demonstrates how this varied range of experience with commoning can be turned into a practical, open toolbox.


Can the Goethe-Institut get involved in commoning together with the commons movement? In their open access book Free, Fair and Alive, Silke Helfrich and David Bollier explain that commoning must happen beyond conventional institutions, partly because these institutions are frequently organised in a hierarchical way. This is also the main reason why Stavros Stavrides takes such a critical view of the Goethe-Institut’s potential as a “commoner”.

Nonetheless, the Goethe-Institut is still in a position to support the commons movement – by bringing together commons actors and serving as a discussion platform for their ideas and practices. Even if the Goethe-Institut in its current form cannot be a commons, it is still capable of creating commoning spaces: the Goethe institutes in South East Europe will keep exploring the theme of the commons, launching projects that focus on it and gearing their own practices to the ideas of commoning. These will be mediated by educational and cultural formats that include solidarity, horizontality, democracy, sustainability, and gender justice as an integral process of shared learning. How might such formats look? This is something the Goethe-Institut is seeking to determine, working together with commons actors in South East Europe and Turkey.

We look forward to working with all those who feel the commons is important!

This work is licenced under Attribution-NonCommercial-ShareAlike 4.0 International (CC BY-NC-SA 4.0) .

Any questions about this article? Get in touch!