Interview with Thomas Schaupp
Somewhere between the Past and the Future

Glaring at a computer screen on an unusually wet and windy summer day in Reykjavík; I met Thomas Schaupp, one of the curators of Goethe Morph* to talk about the beginning of it all –how the project came into being. Thomas is based in Berlin, and at the time of our talk, he was in his home, eager to talk about the project he and his collaborator Arnbjörg María Danielsen embarked on in 2021.

SF: How did the idea of Goethe Morph* Iceland come into being?

TS: The whole project was initiated by the Goethe Institut. They had an open call for a Pop Up Goethe Institut in Iceland last year. Their idea was to place some innovative activity held within a certain timeframe. It stems, among other reasons, from the fact that there hasn’t been a Goethe Institut in Iceland since 1998. I guess that, from the political side, there has been some pressure also to make a return. So the basic question was how to be present in a country without an actual, institutional base. 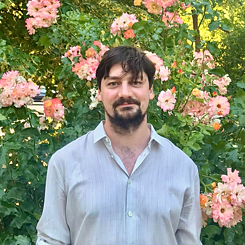 Thomas Schaupp | Photo: Luca De Vitis Arnbjörg and I had been interested in collaborating for a while and this call was an ideal proposal for us to work on something together. I know Iceland very well and Arnbjörg has been living in Germany for many years. We were both familiar with the project’s respective contexts. Well, and then our proposal got accepted.

Setting up to create an innovative materialisation of the Goethe Institut in Iceland, we engaged in long dialogues about the potential form this could take: And the idea for the Pop Up has changed quite radically since then. Pop Up implies something that appears and disappears. Though, at the same time it was also about creating something that would act sustainably and in the long term. That's why we decided to find a new name and to develop a structural proposal that at least has the potential to remain for the future - in whatever form that could be.

At one point, Arnbjörg suggested the idea of the term morph. It relates to morphology, of how things form. We like that a lot because it suggests that something is materialising, and will never have a concrete, steady form but will keep changing and forming. There is also a connection to Goethe. Johann Wolfgang Goethe was the first to bring the term morphology into common language at the time. Well, and that is roughly how Goethe Morph* Iceland finally came into being.

It felt a bit like society stood still. There seemed to be either pessimism or looking at the future as something utopian. We try to respond to this by positioning ourselves mentally in the future or in a time beyond the sheer now. And from there we look back at ourselves today.

SF: What is the thematic frame of the project and what kind of program is taking shape?

TS: The thematic frame was built around the phrase: how we always wanted to have lived. What interested us at the time we applied was that we were in the middle of the pandemic and I think there was a lot of pessimism, both in Germany and in Iceland. The main questions seemed to be: what will the future bring and how can we trigger change? It felt a bit like society stood still. There seemed to be either pessimism or looking at the future as something utopian. We try to respond to this by positioning ourselves mentally in the future or in a time beyond the sheer now. And from there we look back at ourselves today. Instead of thinking about how we want the world and our lives to be in the future, we can reflect about the way we actually live now.

The program itself is subject to a holistic approach, bringing together the most diverse proposals from artists and thinkers around this thematic frame. It's not so much about presenting artistic products, but more about an exchange of processes. We have paid special attention to the exchange of artists and thinkers in Iceland with colleagues from Germany, but also from other corners of the world, such as Kenya, Mali, Greenland and Ukraine. So it is not so much about presenting interesting works from outside to the audience in Iceland or showing the world what Iceland has to offer. Rather, it is about what emerges when different approaches and ways of thinking are brought together.


SF: In what way is Goethe Morph* a process oriented project and platform?

TS: From a curatorial perspective it was important to us that we keep our theme flexible. One event that impacted this thinking was the war in Ukraine, for example. What is it that we should present in a time of war? I remember that initially we were trying to imagine living differently, in a positive and hopeful way. But now, in the midst of a war and with a pandemic still going on, how could we talk about hopefulness in an appropriate manner? This is one example of how we keep our curatorial ideas moving and in relation to what is actually going on in the world around us. By the way, everyone we invited last year to create projects or share ongoing processes within Goethe Morph* Iceland also constantly adapts to what is happening within and around their project.

Furthermore, Arnbjörg and I were particularly interested in approaches that are thinking from an intersectional and decolonizing manner and with a transcultural and transmigratory approach. They have in common that they shake the established canon of knowledge, especially within our western thinking, and formulate alternative ways. Also in this sense, the process-oriented, reformulating, morphing plays a role - not only in the way of materialising, but also of thinking.


SF: What can we expect to happen when the events take place in Iceland in September?

TS: Our project has been heralded since earlier this month by a digital program of Instagram takeovers, thematic framings and first glimpses into the artistic processes. All of this eventually leads to a local program at the Nordic House in Reykjavík. There, all the artists meet and enter into dialogue with society in a variety of forms - for example, through workshops, talks, decolonizing dinners, hybrid exhibitions, and dance improvisations. Two weeks full of different intercultural activities where we can meet around different approaches towards commonly thinking about how we always wanted to have lived.