Meenal has been working as a waste picker in Mumbai for 20 years. | Photo (detail): Natalie Mayroth

They pick up, sort through and gather together recyclables. Without its 300,000 waste pickers, the city of Mumbai would probably drown in its own rubbish.

It is dawn, and Meenal is already on her way to work. She leaves the house with huge white sacks that are bigger than she is. From six in the morning until noon, she and her sister Rani pack the sacks full of anything recyclable that they can find on the streets of the Mumbai suburb of Santacruz. Their only equipment is a metal pick-up stick and a scarf to cover their mouths.

Meenal has tied her grey hair into a plait and wears studs in the shape of flowers in her nose and ears. Despite her tough job, she has a warm smile on her face when she talks about it. “Not everyone appreciates what we do, but it enabled me – until the pandemic hit – to earn an honest living”, she recounts. Meenal came to Mumbai with her family from the south of India a good 20 years ago, in search of a better future. Ever since, she has earned her money as a waste picker.

She and her sister are just two of the 300,000 or so waste pickers who comb the streets of Mumbai alone. They hunt down and sort what others throw away. And without them, the city would probably drown in its own rubbish. It is not hard to imagine this scenario if you take a stroll by the seaside: from bags of flour to sandals, the water regularly spews out all kinds of different waste. 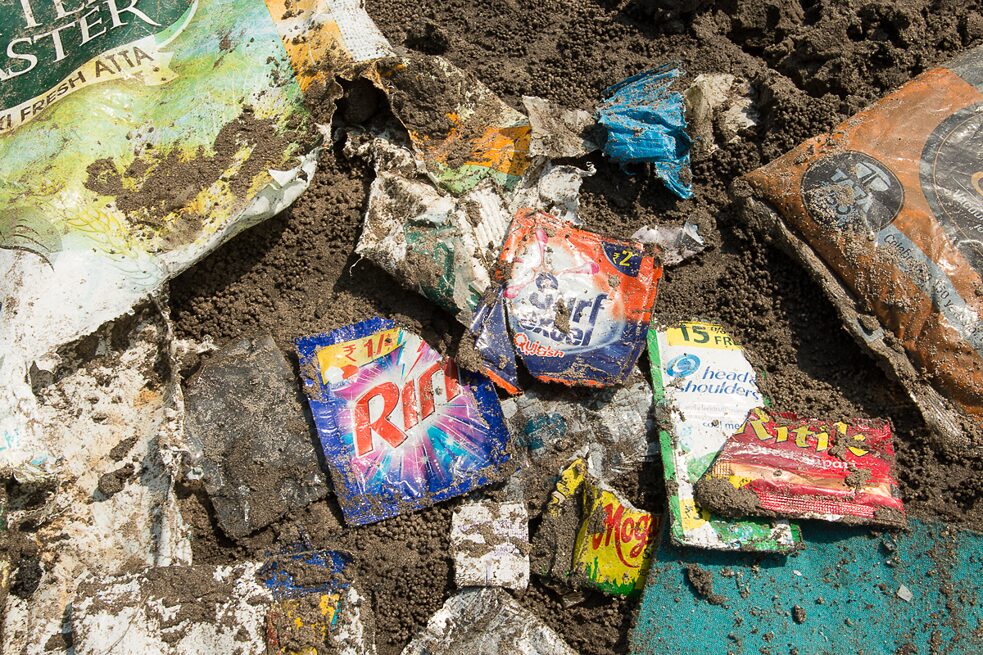 Plastic waste washed up on the beach in Mumbai is a major problem | © Natalie Mayroth Because the weather quickly becomes hot and humid, Meenal does her first shift of the day in the early morning hours. After lunch she gets back to sorting through the waste she has collected. In a spot close to a small park, she adds the plastic bottles and containers to the others in the white sack. In the evening, a few men with a truck will arrive to pick up her spoils. 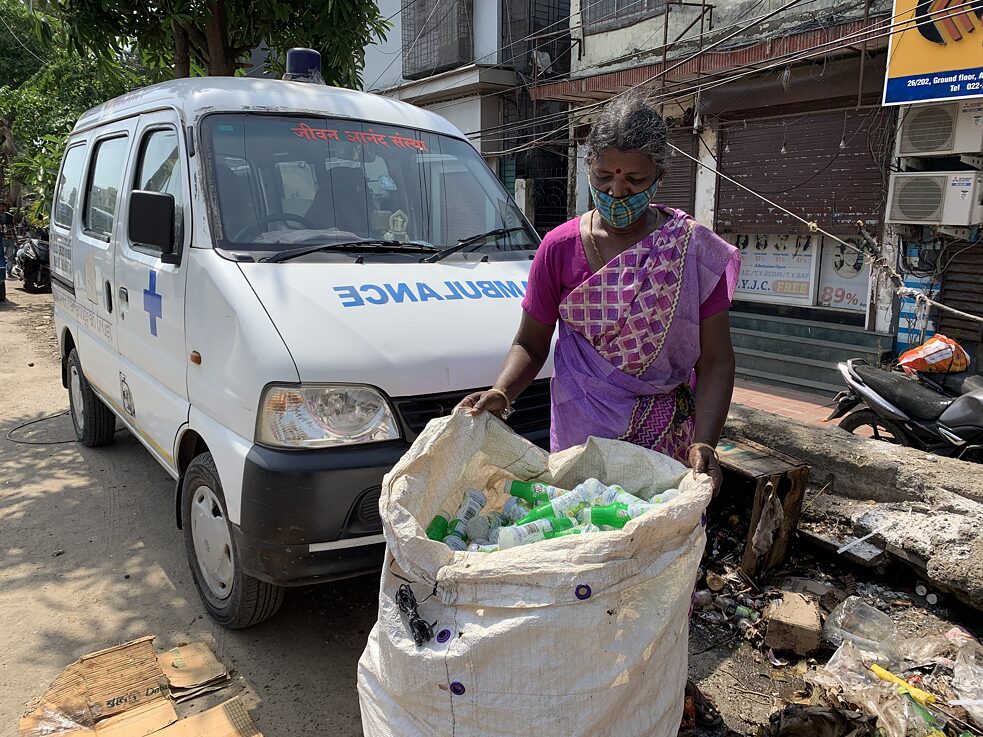 Rani with an almost full sack of plastic. | © Natalie Mayroth Although the widespread use of plastic is supposed to have made life easier in India in recent years, Mumbai generates on average 8,000 tons of rubbish each day, 408 tons of which is plastic (pre-pandemic figures). Though not all of it can be recycled, some of it certainly can. Much of the waste still ends up in Dharavi, India’s biggest slum, just a few kilometres from Santacruz. This is where Laxmi works.

The Battle for Recognition 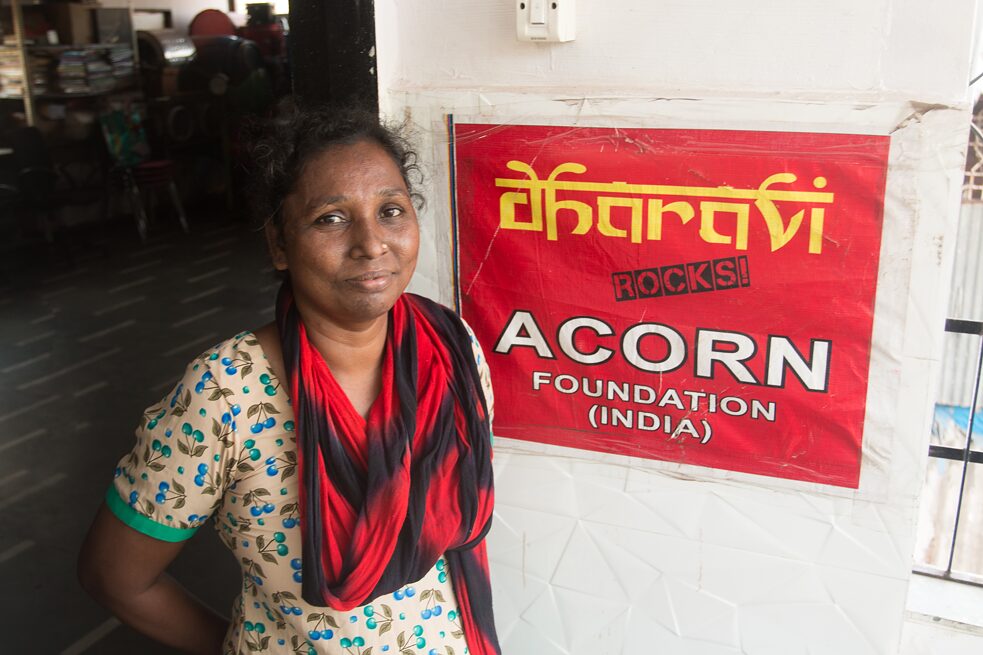 From daughter of a recyclables dealer to social worker: Laxmi Kamble. | © Natalie Mayroth Even during the period of British colonial rule, the former fishing village of Dharavi grew as factories and workers were moved out of the city centre. People from all over the country came to the relatively prosperous city of Mumbai in search of work. In the labyrinth of corrugated roofs, street-food stalls, mosques, markets, small temples and canals, people are busy making pottery, doing their laundry and trading. One line of business is recycling.

Close to the well-known T Junction, the gateway to the old part of Dharavi, can be found the offices of the Acorn Foundation. Laxmi Kamble, 41, has been a fixture here for 15 years. “We teach children how recycling works”, she says.

“Normally water bottles or damaged plastic pipes are simply thrown away, but here we turn them into something new”, she explains. They use a 3D printer to get the “best out of the waste”. Laxmi goes to a shelf and points to a lamp that was made out of a PVC pipe. This fun pastime is more than just a way of occupying the children of waste pickers: for example, they make musical instruments and learn more about the raw materials. In addition, the Acorn Foundation helps their parents with legal matters, such as obtaining electoral documents or food ration cards.

This is one way to give the waste pickers the respect they deserve. The social worker Laxmi knows from her own experience how difficult that can be. After separating from her husband, she joined her mother’s recycling business as an intermediary. This affected her daughter at school, where she was teased as the “relative of a waste picker”. Nowadays, however, Laxmi passes her knowledge on to others.

Laxmi herself enjoyed only a brief period at school, though her knowledge about plastics is considerable. The empty plastic bottle she is holding in her hand comprises three different qualities of plastic, she explains; not all are suitable for the 3D printer or can be so easily recycled.

New Ideas to Resolve the Waste Problem Are Needed

There is too little separation of waste in cities like Mumbai, says sustainability consultant Tamanna Sharma. It is thanks to the waste pickers that this has not yet resulted in a waste crisis. “In Dharavi, you can see how much recyclable plastic is in circulation, and that downcycling is happening all the time”. “Downcycling” means recycling something not just once, but multiple times. “The recycling industry has potential, and India consumes less new material than countries that are constantly producing new plastics”, says Sharma, who believes that public-private partnerships are the way forward. 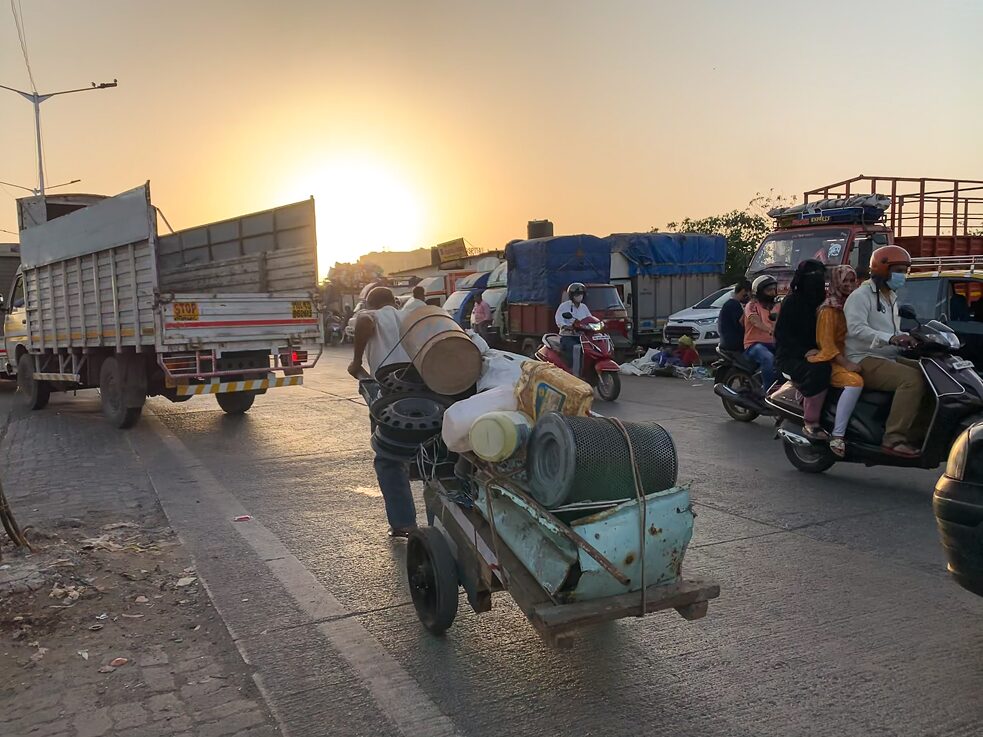 At the end of the day, a man pulls his cart containing waste plastic and metal down the road close to the Acorn Foundation. | © Natalie Mayroth This is because one problem remains: the waste pickers are not paid by the municipality for their work, nor are they recognized as its employees. Generally speaking, the waste management sector in India is for the most part disorganized, involving no contracts or social security, as is the case with roughly 80 to 90 percent of all jobs in India.

Sampurn(e)arth, a social enterprise from Mumbai, wants to change this, at least to some extent. Since 2012, it has been focusing on urban waste management, strengthening the position of waste pickers and promoting the environmentally compatible disposal of materials that can no longer be recycled. Such plastics, like the foil used to package potato crisps, are sent to cement factories, says the company’s founder Debartha Banerjee.


“We believe that promoting the informal market by legalizing it is the key to resolving the waste problem. At the same time, it offers us a business opportunity”, says Banerjee. “Consequently, we work together with different actors from city government departments, housing corporations, schools, big companies and the informal waste market”, the engineer adds. They have employed waste pickers in Mumbai, Goa, Kolkata and other cities; they pay them a fixed wage, provide them with the equipment they need for their work, and formally train them to become waste managers.

Working in the informal sector, particularly during the pandemic, poses considerable challenges for people. Meenal and Rani have seen their incomes halved, they say. Yet it is important that recycling does not stop, and that the women and men involved are supported so that they can continue their work safely.

Every person worldwide generates an average of 0.74 kilograms of waste per day. In the global North this is more, in the so-called global South significantly less. Those who contribute least to the catastrophic masses of waste - to e-waste or plastic swirls in the ocean - are affected the most: they lose their homes and in the worst case even their lives to landslides from landfills, they work under unsafe conditions collecting waste and suffer serious health consequences. According to the World Bank, the amount of global waste is expected to increase by around 70 percent by 2050 - if nothing changes by then. In our three reports on the topic of "waste masses", the authors take a look at three approaches to reducing waste and discuss how recycling can become more profitable and safer.

Natalie Mayroth is a German journalist who lives in Mumbai, India. In collaboration with Mayur Yewle, PhD student and translator from Mumbai.