Green Financing Fossil Fuel Divestment Works – at Harvard and Beyond

Amid an escalating climate crisis, many institutional investors have dropped their fossil fuel assets. Harvard joined them in fall 2021, divesting its endowment from the oil and gas industry – thanks in part to the tireless work of pro-divestment activists.

By Joseph Winters and Caleb Schwartz

On September 9, 2021, Harvard affiliates opened their emails to a surprising message from President Larry Bacow. After nearly 10 years of firm resistance, the university would finally divest its multibillion-dollar endowment from fossil fuels.

“It was shocking,” said Phoebe Barr, an organizer with the student-run divestment campaign, Fossil fuel Divest Harvard. “We understood that this was a really powerful moment.”

The email, which was delivered on a Thursday afternoon to the Harvard community of students, faculty, and alumni, laid out a list of steps that the administration had previously taken to reduce the endowment’s exposure to fossil fuels. Much of it was already public knowledge – like the fact that the university’s fossil fuel holdings had fallen from roughly 11 percent to 2 percent of the endowment over a 12-year period, landing at an estimated 838 million Dollar as of spring 2020. 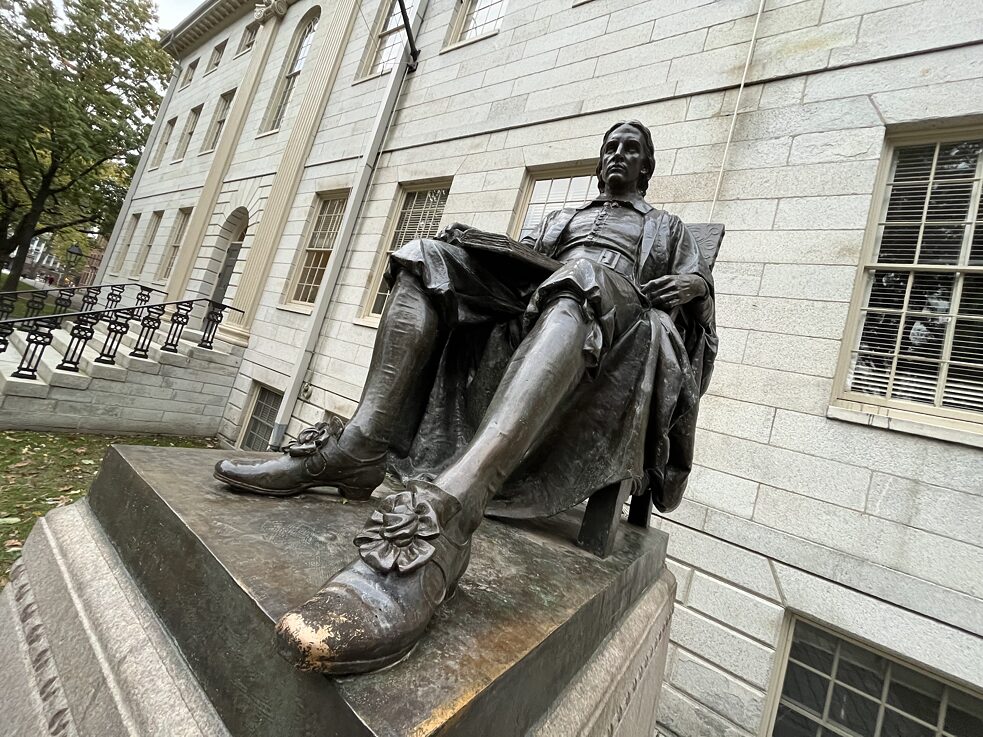 A statue of Harvard’s founder, John Harvard. | Photo: © Caleb Schwartz But in the letter was a new nugget: Harvard’s remaining fossil fuel investments – held indirectly through private equity funds with holdings in the industry – were “in runoff mode” and would not be renewed after expiration. In short, Harvard was committing to fossil fuel divestment — a move that activists believed would send shockwaves through the world of higher education and institutional investing, depriving the fossil fuel industry of both social and financial capital.

Divestment is basically the opposite of investment: Rather than buying shares or assets associated with a particular company or business, divestment involves selling them off. This can be a purely financial move; sometimes a particular set of holdings just isn’t profitable anymore. But withdrawing funds can also send a powerful social and political message about an investment’s morality.

This is essential to divestment advocates’ theory of change: Fossil fuel investment lends legitimacy to companies that have engaged in decades of climate denial, they argue, and divestment is a powerful way to disavow the industry’s past and present efforts to forestall climate action.

“There is a long history of corporate disinformation by fossil fuel companies,” said Ortal Ullman, senior outreach coordinator for the Climate & Energy program at the Union of Concerned Scientists. It’s still going on, Ullman added: Companies have more recently “honed” their disinformation campaigns, pivoting to greenwashing advertisements and in some cases enlisting third-party groups to work against climate action – to “do their dirty work for them,” as Ullman put it. Indeed, most major oil companies retain membership in trade and lobbying groups that have opposed major climate policy such as the Democrats’ Build Back Better Act. 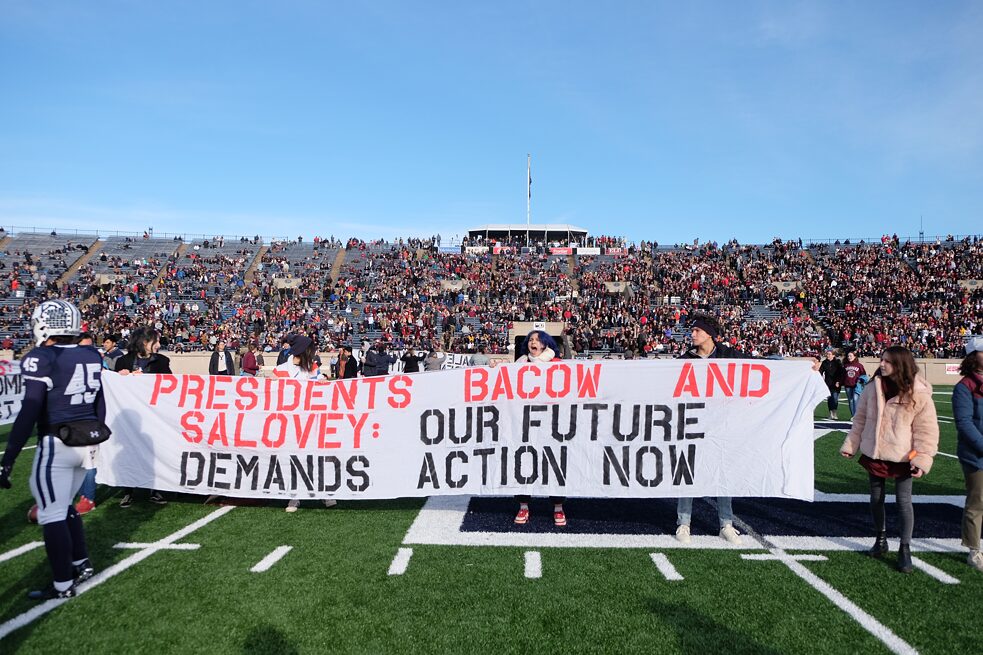 Students from Harvard and Yale sit on the field during the 2019 Harvard-Yale football game. Over 500 students participated in this action, drawing international media attention for their disruption of the colleges’ annual tradition. | Photo: Campbell Erickson © Fossil Fuel Divest Harvard Plus, Ullman said, oil companies’ growth plans do not illustrate a willingness to be good-faith partners in a transition away from fossil fuels. Despite the industry’s various climate pledges and emissions-intensity reduction schemes, many companies continue to invest just pennies in renewable energy, and a 2020 analysis by the Transition Pathway Initiative determined that none of the 59 largest oil and gas companies had made a climate commitment that was in line with the Paris Agreement goal of limiting global warming to 1.5 degrees Celsius.

According to Jade Woods, a Harvard senior and an organizer for Fossil Fuel Divest Harvard, this ongoing legacy of promoting climate denial and obstructing action merits major condemnation. Through divestment, she advocates for a kind of stigmatization that could take away the industry’s “social license to operate” – its implicit social contract with the public that allows business as usual to continue unimpeded. The fossil fuel divestment movement’s main objective, she said, must be “to take away that social capital that fossil fuel companies have.”

The idea is not new. As a tactic for advocacy, divestment long predates the global campaign to rid universities of their oil and gas holdings. It was previously used to condemn Big Tobacco companies and in the campaign to end the South African apartheid regime. In either case, activists aimed to brand assets as so morally repugnant that the public would eventually turn against them.

Not everyone agrees that fossil fuel divestment is the best way to address the climate crisis. Those who take issue with divestment tend to argue that it’s better to try to change corporations’ business practices from the inside. Rather than cutting ties with a stubborn company, exponents of this strategy say that “engagement” allows investors to use their leverage as part-owners of a company to push for incremental change – perhaps to encourage fossil fuel majors to use their vast knowledge and resources to help the world decarbonize. Indeed, this is what 40 years of Harvard presidents – from Derek Bok and Drew Faust to Larry Bacow – have at one time or another put forward as a preferable alternative to divestment.

But activists are deeply skeptical of this approach. They say there is limited evidence to support the idea that shareholder engagement is enough to push the needle when it comes to climate change. 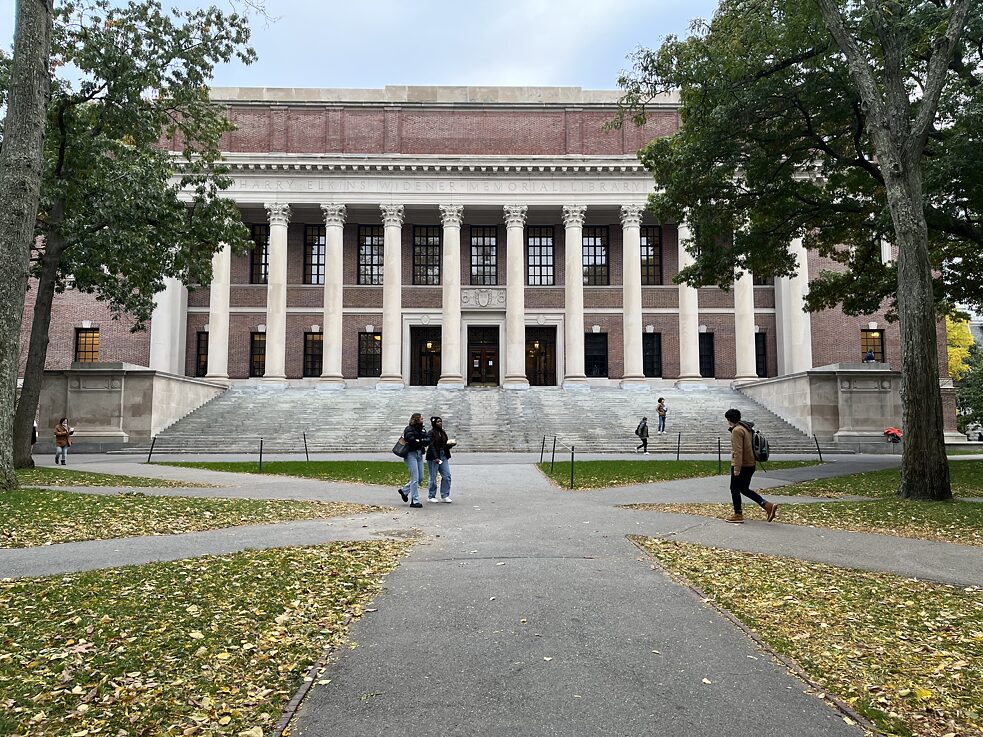 Widener Library: Harvard’s largest on-campus library, also the site of numerous FFDH protests. | Photo: © Caleb Schwartz They pointed to Climate Action 100+, a shareholder initiative in which Harvard takes part, as illustrative of the strategy’s failure. In the group’s most recent progress report analyzing all of the oil and gas companies that it targets, Climate Action 100+ found that more than three-quarters of its focus companies were still sanctioning fossil fuel exploration projects outside the scope of the International Energy Agency’s scenario to limit global warming to 1.75 degrees Celsius by 2100. Additionally, the report found that more than 80 percent of the companies remained members of industry associations lobbying against Paris Agreement-aligned climate policy.

The Money of Divestment

Since the fossil fuel divestment movement began in 2012, more than 15,000 institutions overseeing a combined $39.2 trillion in assets have pledged divestment from the oil and gas industry. These institutions include the New York City Employees Retirement System, the $5 billion Rockefeller Foundation, the $90 billion Storebrand hedge fund, and dozens of educational institutions – including Cornell, Brown, the Universities of Oxford and Cambridge, and the $126 billion University of California system.

Many of these institutions have cited financial reasons for divestment. The University of California’s endowment fund managers, for example, wrote in the L.A. Times that they had dropped fossil fuel assets because “they posed a long-term risk to generating strong returns for UC’s diversified portfolios.” Indeed, the fossil fuel industry has long been on the decline.Now, as world leaders increasingly recognize the need to switch to pollution-free forms of energy, the International Energy Agency has said that demand for oil and gas may never return to pre-COVID levels.

“From a financial perspective, divestment is the right course,” said Richard Brooks, climate finance director for the nonprofit Stand.earth. “The smart money is getting out of fossil fuels.”

There is also emerging evidence from the fossil fuel industry itself that divestment is having a material impact. Even in 2017, when the divestment movement had not achieved even half of its current success, Shell specifically identified the potential of fossil fuel divestment to have a “significant adverse effect” on its ability to operate.

President Bacow’s email in September may have signalled a sea-change for the divestment movement. As news spread in the following days and weeks that the planet’s richest university would no longer invest in oil and gas, activists saw a surge of divestment pledges from other institutions: Boston University, Dartmouth, Vassar College, the $8.2 billion MacArthur Foundation, among others. “Harvard cracks and a dam breaks,” as Politico put it. 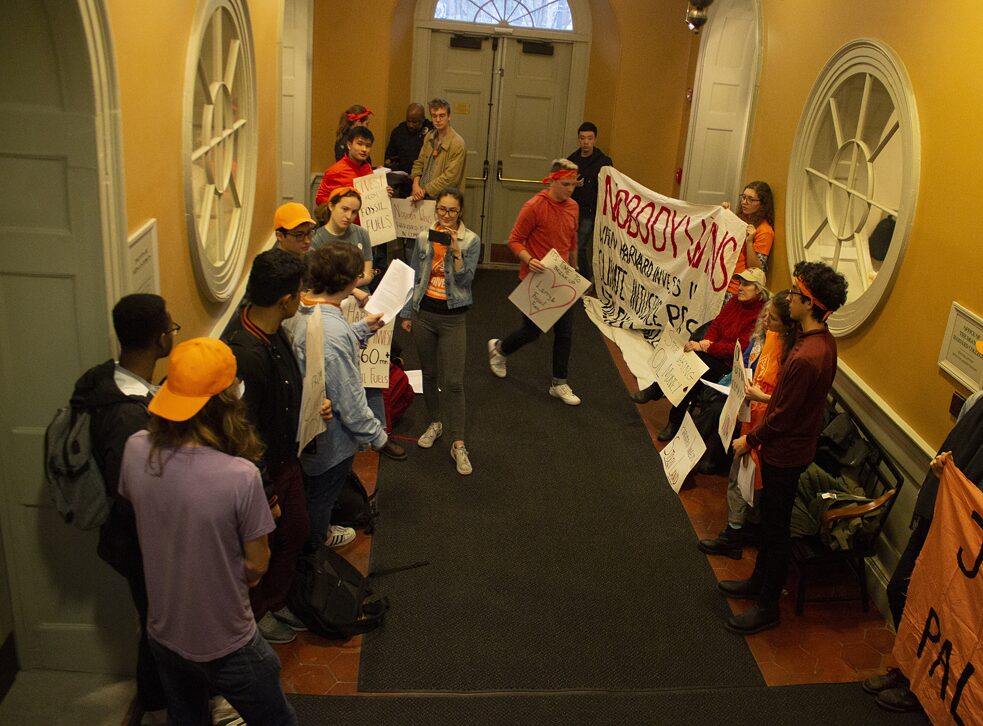 However, Woods, the Fossil Fuel Divest Harvard organizer, added that there was more work to be done – at other universities, in Congress, and everywhere else that has been pervaded by the fossil fuel industry’s influence. In 2021, a year that saw record-breaking wildfires and flooding, and whose summer was the hottest the planet has ever seen, action is more urgent than it’s ever been.


How Do We Get Away from Fossil Fuels?

About 90 percent of all greenhouse gas emissions are due to the burning of fossil fuels. Since industrialisation, the use of fossil energy has enabled continuous economic growth in the so-called Global North - which has thus mainly caused climate change. However, it is mainly countries from the so-called Global South that are affected by the consequences. In the meantime, in the case of 85 percent of the national markets, wind and sun are the least expensive forms of power generation when it comes to building new power plants. Yet, the global energy situation as a whole is still not very renewable. In 2019, according to the International Energy Agency, fossil fuels still account for four-fifths of primary energy consumption worldwide. There is a clear urgency for change. In our three reports on the topic of "Fossil Energy", the authors take a look at three approaches to the energy transition and ask the question of how we can change our ways of doing business.

Journalists Joseph Winters and Caleb Schwartz are Harvard alumni and ware both active in Fossil Fuel Divest Harvard during their student days.