Artificial Intelligence and Art When Is Art Really Art?

When AI creates a painting, is it truly art? And who ultimately owns the copyright? | Photo (detail): © DeepArt

Artificial intelligence making art puts a new spin on age-old questions, such as if AI art can really be called art, and who gets credit as the artist – the machine, the programmer or the person whose data was fed into the algorithm.

Whenever Berlin-based artist Roma Lipski sets to work, his assistant has already prepared the ground. When Lipski provides pictures of say California landscapes, his assistant uses them to sketch a variety of approaches to how the region between the Rocky Mountains and the Pacific could be depicted. The Poland-born painter takes these sketches as inspiration, a jumping-off point for creating his own interpretations. The best part is that Lipski’s assistant has an incredible work ethic. The helper he lovingly refers as “my muse” never calls in sick, takes a holiday or asks for the weekend off. It works uncomplainingly night and day, completing every assignment the boss puts on its desk. Lipski’s right-hand man is not, in fact, a man, but a machine.

The artist himself euphorically refers to this collaboration as “a true partnership between a painter and artificial intelligence”. Lipski discovered the advantages of artificial intelligence (AI) while working through a creative block. He got to know IT expert Florian Dohmann from the YQP artist initiative and the two worked together to create Lipski’s artificial assistant. Since then, this personal assistant has been analysing Lipski’s paintings, breaking them down into their component parts, and recombining them in new, innovative ways. It serves the painter as an extension of his brush and an external hard drive all in one.

Like Roman Lipski, many painters, composers and authors are employing virtual tools in their craft today. They value machine learning (ML) because, like many other technologies, it opens new pathways of expression. AI takes an active part in creation and the results can be astonishing. “It is fascinating that AI can play a role in creating something as deeply human such as ecstasy,” composer and sound artist Holly Herndon says.

Musician and sound artist Holly Herndon performing her third full-length album “Proto” developed with AI at the 2019 Club to Club Festival in Italy. | Photo (detail): © picture alliance/Pacific Press/Alessandro Bosio On her album entitled Proto, an abbreviation of the word “protocol”, the Berlin-based American artist sings with Spawn, an AI she programmed herself. Before recording, Herndon fed the software a training set comprising her voice and the voices of a small ensemble. The artificial intelligence then recorded voice samples its algorithm judged fitting and the human singers responded in song. The human-machine music Spawn and Herndon recorded together reminded one critic from MusikExpress music magazine of “a kind of sacred music from a distant future.”

Composing Works Well, Jamming Not So Much

Many other types of AI are involved in the process of creating art. In France, researchers fed a dataset of 45 Beatles songs to a neuronal network, when then independently wrote Daddy’s Car, a song in the style of the group’s songwriters John Lennon and Paul McCartney. In October 2018, Edmund de Belamy, a painting generated by AI, was sold by New York’s Christie Auction House for a record price of 432,500 US dollars. In Tübingen a team led by neuroscientist Matthias Bethge developed a software for analysing and reproducing works by master painters. Today Bethge’s website deepart.io allows users to upload any motif and have it transformed into a work of art in the style of their favourite painter for 1.99 euro. “Art is primarily about perception,” Bethge says, “which is what makes it such an exciting area for us.” 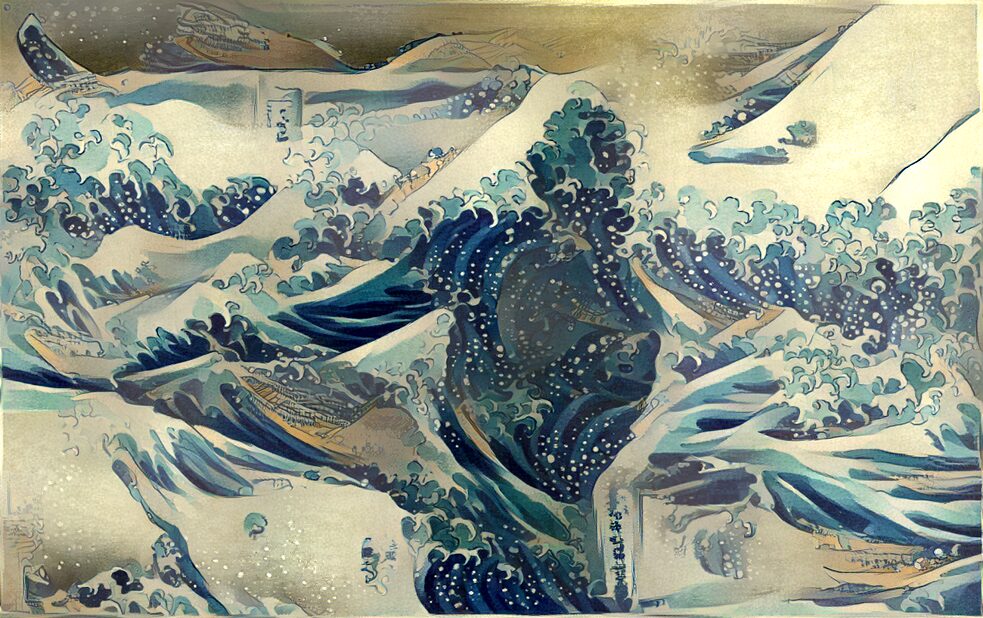 What is the real artist behind this painting? On the depart.io website, a neuronal network transforms pictures uploaded by users into works of art in the style of famous painters. | Photo (detail): © DeepArt The algorithms have their weaknesses too though. Many creative works created entirely by AI are as predicable as the elevator music piped into the public spaces of a mid-class hotel. The AI-composed Daddy’s Car song had to be recorded by human musicians because pure machine instrumentation would have sounded too static. Even Matthais Bethge admits that his painting program is “more of an artistic tool” than an independent artist at the moment.

The question of whether AI can actually create art is a hot-button topic and the answer you subscribe to depends on your perspective, on whether you focus on the creator of a work of art or measure the artistic value of a piece based on its impact. Art researcher Bernd Flessner evaluates AI art with an eye to the audience. “If a work of art says something to the person who looks at a painting, listens to a piece of music or reads a book, then it is art regardless of how it was created,” the Erlangen-based scientist says. Accordingly, an algorithm can be just as creative as a person.

Neuroscientist Bethge agrees that machines today fulfil the classical criteria of human creativity. “The modern form of Ai gathers experience, analyses structures, separates them from the past and uses this basis to create something new and surprising. This is exactly what creative person does as well.”

And this is exactly what the AlphaGo AI did in a memorable battle of the wits in in March 2016. In the final game against the best human player of the Chinese strategy boardgame Go at the time, AlphaGo made a move that critics claimed a human player would never have risked. To viewers following the match live on YouTube, what initially looked like a mistake soon proved to be a brilliant strategic manoeuvre that decided the game for the machine and completely amazed viewers.

Mathematician Marcus du Sautoy was also watching at the time. “I realized that this was a phase-change moment that would have an impact on me in my own creative world,” the Oxford University professor who wrote The Creativity Code about AI and creativity remembers thinking. In his book, du Sautoy explores how AI art, literature and music are opening entirely new dimensions because AI can gather and process data and combine it to create something new faster and more comprehensively than human beings can. Interestingly, machine learning can even be used to make machine artifacts seem humanoid. French collective Obvious, the creative driver behind the fictitious Edmund de Belamy, pitted two algorithms against one another. They fed one, the Generator, 15,000 portraits painted from the 14th to the 20th century the AI then used to constantly generate new portraits. The other algorithm, the Discriminator, was tasked with rejecting any portrait it assessed was created by a machine. The Generator tricked its opponent with Edmund de Belamy when the Discriminator failed to detect the Generator’s role in creating the painting.

The Question Of Ownership

While software is getting to be more and more like human artists in terms of skill and craftsmanship, it has no sense of social, emotional or societal factors, all of which are central driving forces behind creative pursuits. Seen through a sociological lens, it is therefore a cross between a cloudy mirror and a blinkered specialist. No matter how impressive the skills of artificial intelligence may seem, every digitalised discipline seems to hit a wall quite quickly because it is so naïve about anything outside of its set task.

At the moment, du Sautoy says, this is a creative shackle limiting artistic AI: “As people, we can access a whole trove of visual, acoustic and written data and combine these in new and surprising ways. But AI is based on very limited datasets.” In other words, while machines can analyse and process huge amounts of data, their imaginative skills only go as far as the data they are given access to. They cannot draw connections and inferences from experience taken from life and other areas.

This then raises the question of who actually owns the rights to AI generated art: the software, the programmer, or the coder who fed it data and gave it instructions. And then there is the question of any copyrights on the music, drawings or novels the machine was given to learn from.

This question because a very real issue after the AI painting Edmond de Belamy sold for a record sum. The money from the auction went entirely to the Paris Obvious collective who describes its work as a hint “of the parallels between the programming of an algorithm and the expertise that defines an artist’s skill and style.” This angered Robbie Barat, a US artist and developer who had uploaded the algorithm to the net as open-source software for anyone to use and develop. He saw nothing of the money, and neither did any of the tens of thousands of artists whose work formed the data substrate poured into the Edmond de Belamy Generator.

AI is revealing itself as a crack in the door through which light is falling on our human concept of art. After all, the question of who truly created a hit song, a valuable painting or a best-selling book applies equally to human artists. This makes AI-supported or generated art important solely because it has reconfigured the age-old controversy around who or what an artist really is. It might be a cloudy mirror, but it is one in which we can see ourselves just a little bit better. And that alone is a true artistic feat.

Harald Willenbrock is the co-founder of brand eins magazine and WALDEN and writes for publications like NZZ Folio and GEO.