Black Women in the Library Why Don’t We Read Black Female Writers As Well?

How many Black female writers have you read before? The question is more of an invitation to the group “Mulheres Negras na Biblioteca” (Black women in the library), which was founded in 2016. The objective is to propagate literature by a variety of Brazilian and foreign female authors, who have been invisible from a historical perspective in Brazil – a country in which more than half of the population are of African origin. Carine Souza, on whose initiative the project was based, talks about the challenge of getting works like this onto shelves in public libraries and into the hands of readers.

How did you identify that works by Black female writers were missing from libraries?

Before I trained to become a librarian, I had already done a degree in literature, and in one seminar on African literature I asked the lecturer about Black writers – women – and he said that he didn’t know of any. That bothered me so much that I brought together other Black female students, and we decided to research women authors and set up a reading group focused on Black women poets, in which more than 800 people became involved in the end. Later on I began my training as a librarian, and having had this experience early on I searched in the library for works by Black female authors. I looked for well-known names like Carolina Maria de Jesus, Maria Firmina dos Reis, Conceição Evaristo … and I didn’t find any of them. So I did the same thing again: I summoned my Black female colleagues and we pledged to bring books into the library and motivate people to read these women writers.

Does this perception coincide with your own growing awareness of being Black? What was that like?

During my degree and my training I was going through this process of understanding myself as a Black person. I’m a Black woman with a light skin colour who is seen by society as Black or not Black, depending on the situation. I was looking for my own identity, I was searching everywhere for Black women and was experiencing this uneasiness that I didn’t know any Black authors or have access to them. I attended many discussions about racism, negritude and the relationship between skin colours in Brazil. In the process I stumbled upon the subject of the historical erasure of Black women and the invisibility of their narratives – both in general and in literature.

In an academic study you were able to prove the absence of Black women writers in public libraries in São Paulo. How did these institutions justify themselves?

The municipal library network of São Paulo responded and told us the criteria they use for compiling collections – including for instance the fact that books feature on bestseller lists or are published by major publishers. As I see it these criteria are more of an obstacle, because they are an expression of the book market and not a policy of inclusion. I know female authors who organise their own printing, use small publishing houses, or produce their books by hand, doing all the stitching and binding themselves. These books never make it to the library. But what alarmed me the most was the answer that there is no demand for these female writers. Of course not! The truth is that the audience potentially most interested in these books, in other words Black women, does not see itself represented in the library. The general public has absolutely no awareness of these authors.

Can changes be identified in the library collections and in the reading public, now that “Mulheres Negras na Biblioteca” are active?

It’s a project in baby steps. But the bottom line is that developments are positive. In 2018 the municipal library network of São Paulo invited us to take part in an event. In return we asked them to purchase the books on our list of Black female writers, nearly 200 titles, and they complied with our request. The whole point of our activity is to get people to read these books. We organise reading clubs, we have 14,000 followers on Instagram, we’ve received feedback from numerous libraries telling us that they have been inspired by us to run projects of their own. 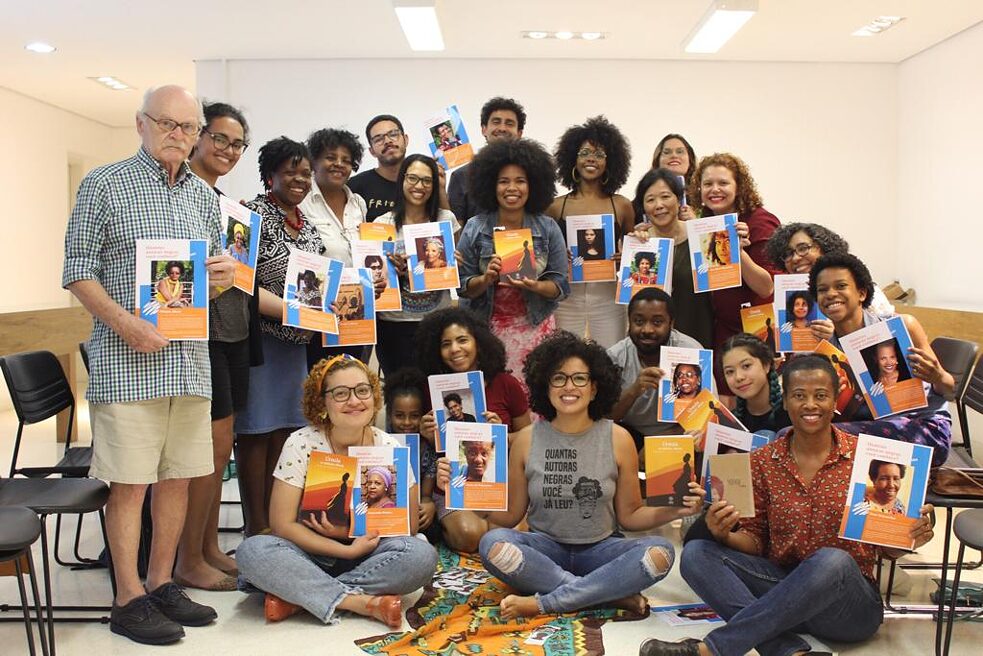 “Mulheres Negras na Biblioteca” project discussion group | Photo (detail): © Guilherme Menezes ‘How many Black female writers have you read?’ – The question is a means of mediation. People who have never given it any thought start to reflect. Some people might not like it, they say: “When I read, I don’t think about the skin colour or gender of the person writing; after all that would be prejudice.”  And we say: “The fact that you don’t have these thoughts is precisely the problem. You don’t even notice that you aren’t reading these authors, and you don’t even know they exist.” You have to put the spotlight on the authors, on their ethnicity, their time and their country, to be able to put their works into a context.

A study recently identified that more than 70 per cent of the authors published between 2004 and 2014 by mainstream Brazilian publishers were male and 97 per cent of them were white. Is what we have here, as Chimamanda Ngozi Adichie says, the “danger of a single story?”

Chimamanda Ngozi Adichie warns that the danger of stories told from a single perspective is the creation of stereotypes. Furthermore the study coordinated by Regina Dalcastagnè of the University of Brasília showed that just 6.9 per cent of characters described in novels are Black people, and only 4.5 per cent are actually the protagonist of the novel. Black women regularly find themselves in positions of subordination, and Black men are involved in criminal activity. If I only ever see this image, at some point I’ll start to believe it’s true. Everyone internalises these stereotypes. It’s very dangerous.

Can you name three Black women writers we could look at as points of reference in Brazilian literature?

I’ll start off with Maria Firmina dos Reis, who was not only the first Black woman writer, she was the first woman in Brazil to write a novel at all – in the 19th century, Úrsula (1859). That was a milestone, but it wasn’t enough for it to be covered on the school curriculum. But things are changing now. We have Carolina Maria da Jesus, whose book Quarto de Despejo (1960; Child of the Dark) became a bestseller in Brazil, and who is one of the most-read Brazilian authors overseas. She is a very important reference for Black women who write, because she doesn’t fit into any of the author stereotypes in Brazil: she lived in the favela, suffered hunger and wrote on paper she salvaged from the trash. And then there’s Geni Guimarẽs, who received the highest award in Brazilian literature, the Prêmio Jabuti, for her collection of short stories  A cor da ternura (1989; The Colour of Tenderness), an autobiographical book that deals with racism.

Author Cidinha da Silva views her classification as a Black female writer critically. How high is the risk that the Black women initiative is seen by the library as a project that puts all these authors in the same pigeonhole?

The question is justified. Cidinha da Silva writes about all sorts of subjects from a variety of perspectives, and she doesn’t like being pigeonholed. Jamaica Kincaid, a female author from Antigua and Barbuda, who lives in the USA, expresses a similar view. When she published her novel Lucy in Brazil in the 1990s, she told a newspaper that she didn’t want people to read her work because she was Black, but because she was a good author. American novelist Toni Morrison on the other hand owns her status as a Black woman writer – and that’s equally legitimate. I think this debate is very important, because if we are highlighting a variety of Black female writers together in a library, the reason for that is to achieve historical correction of this literature. We are not saying it’s all the same by any means, we just want to show that there are also Black women who write. Neither are we telling people they should only read Black female writers from now on, it’s more a case of why don’t they give Black women writers a try? Ever thought about doing that?


The interview was conducted by Tânia Caliari.

Tânia Caliari is a journalist and lives in São Paulo.