History and Sexuality The Colonial Roots of Homophobia

Brazilian anthropologist Luiz Mott is the figurehead of the campaign for citizens’ rights for the LGBTQ+ community in Latin America and its history. In his research he has established that persecution for sexual motives coincides with the start of colonisation of the continent.

It’s June 1979 and anthropologist Luiz Mott and his partner are at Porto da Barra in Salvador, North East Brazil, watching the sunset. Suddenly a man attacks him and hits him in the face. “That affected me deeply. I had never been beaten up, at least not as an adult and certainly not for homophobic motives,” says Mott. The act of violence was an alarm signal: “We needed to get ourselves organised to safeguard the free practice of our sexuality and our rights,” recalls the researcher.

It was only at the start of the year that Mott left the University of Campinas in São Paulo state and took up a professorship in Anthropology at the State University of Bahia. In his luggage he had a study he had begun about sexual persecution at the time of the Inquisition in Latin America – which at that point was still in the early stages of planning. The attack he suffered rekindled his interest in the documents, and so in his role of professor he immersed himself deep into the archive of the inquisitorial system. “I wanted to set my activism on a solid footing, using historical and anthropological truth as proof to the intolerant that homosexuality has always existed – and at the same time to identify the colonial roots of homophobia,” says Mott.

A Taboo of Patriarchal Society

From the meticulous research in the archives of the Holy Congregation, which are stored in the Torre do Tombo National Archive in Lisbon, he created a pioneering work of Latin-American anthropology that put an end to 500 years of silence about a taboo of patriarchal society: the freedom of love between people of the same sex in pre-Columbian America. In any case it debunked the claim that homosexual activity first came ashore in the New World with the colonisers. And it clearly shows how colonial relations led to repression against non-binary sexual relations between the native population and colonialists, which still finds expression today in homophobic behaviour.

“Homophobia is a result of machismo and slavery.”

When the first Europeans invaded America in 1492, they encountered a population there that was living in sexual promiscuity. Reports from those first travellers are the most important source for the customs and traditions of the native people at that time. In his chronicle Historia General y Natural de las Indias (1535), Spanish colonialist Gonzalo Fernandez de Oviedo describes that practices commonly described in Europe as sodomy were being freely performed from the Caribbean to Columbia. In the letter from Pero Vaz de Caminha to the King of Portugal about the arrival of the Portuguese in Brazil (1500), he describes the nakedness of the Indigenous women, who had no shame whatsoever in showing their bodies. The Tupinambá, who at the time occupied most of the Brazilian coast, had their own words for homosexual people: tibira for men, çacoaimbeguira for women. In the well-known Maya Codices (around 1230) there is mention of sexual experiences between people of the same sex.

Within the society installed in the New World, according to Mott, the holders of power – white heterosexual men – represented just 10 to 20 per cent of the population. To control the masses of Black and Indigenous men and women, as well as colonist immigrants, the colonisers were not afraid of exerting extreme violence and enforced with an iron fist the laws imposed by the Catholic kings of the Iberian Peninsula – laws founded on fear, oppression of the individual, coercion and death.

Homosexuality was seen by the Crown as insulting the monarchy, and by the Church as an abominable and therefore unspeakable sin. The tribunals of the Inquisition placed themselves at the forefront of the persecution of sodomists. “To be intimately involved with a Black or Indigenous person” was therefore “a breach of the social distancing order required by colonisation. The colonial ideology implied conquest and led to a macho behaviour that was even more brutal in Spanish and Portuguese America than it was on the Iberian Peninsula at the time of the discoveries. Homophobia is a result of machismo and slavery,” explains Mott.

“Even the president openly declares: ‘I would prefer my son to be dead than gay.’ A discriminatory sentence that we’ve been hearing for centuries in Brazil from North to South”.

The entire collection of trial records in the Portuguese National Archive refers to the Inquisition. Mott investigated four thousand cases, of which 283 Brazilians or Portuguese nationals living in Brazil were charged with the sin of sodomy and were sentenced to punishments such as exile or forced labour on the galleys. Even though not one single Brazilian homosexual was condemned to death by burning at the stake, research was at least able to prove the execution of two homosexuals in colonial Brazil: in 1613 the French conquerors in São Luís do Maranhão bound a timbira from the Indigenous Tupinambá to the mouth of a cannon, with the result that his body was ripped to pieces, and in 1678 a young slave in the city of Sergipe del Rei was whipped to death having been accused of sodomy. According to Mott the repression against lesbian women was less rigorous. In 1649 the Inquisition removed women completely from the list of sodomy crimes.

“Gays ask for justice”: Luiz Mott and Grupo Gay da Bahia member at a protest against the hate-based LGBTQ+ murder in Brazil at the Palace of Justice of Salvador in 1995. | © Grupo Gay da Bahia archive Luiz Mott’s research work on homoaffectivity in Latin America also serves to back the fight of homosexuals in Brazil. In February 1980, a few months after the attack on him in Salvador, the anthropologist founded the Grupo Gay da Bahia (GGB) with 17 other people. It is the oldest movement for the rights of the LGBTQ+ population still active in Latin America and can be credited for significant changes in Brazilian society, for example the removal of homosexuality from the list of diseases officially described by the National Medical Council – in which non-binary sexual orientation was still classified as a sexual abnormality and aberration until 1985.

“Homophobia is a disease”: Luiz Mott and Grupo Gay da Bahia members protest against the arbitrary arrest of transvestites at Salvador's Palace of Justice in 1989. | © Grupo Gay da Bahia archive Mott, now aged 75, remembers that the term “gay” used to be a sort of collective term for a wide variety of sexual orientations. One of the many activities of the Grupo Gay da Bahia in the past 41 years is the documentation of LGBTQ+ people who suffered a violent death since 1990 just because of their “deviation from a socially imposed model based on heteronormative, binary and cis norm references”, to quote the group report from 2020.

A new perspective on the history of Brazil makes clear that it took until the eve of independence, with the end of the Inquisition in 1821, for homosexuality not to be considered a criminal offence any longer. “It was the first step towards citizens’ rights for homosexuals,” says Mott. However the persecution didn’t stop even under the new legal situation. Quite the opposite. Despite some important achievements for civil society – such as making transphobia a punishable offence, marriage for everyone, recognition of a self-chosen name and the right to gender reassignment – Brazil is still the world’s highest-ranking country with the most murders and suicides committed against and within the LGBTQ+ community. 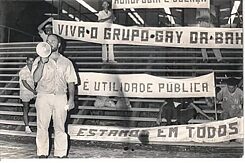 Luiz Mott celebrated that Grupo Gay da Bahia is declared a local public utility at the City Hall of Salvador in 1985. | © Grupo Gay da Bahia archive As a prominent figure in Brazil’s homosexual movement, Mott warns that the hate speech against LGBTQ+ has been getting worse in the last two years. “Even the president openly declares: ‘I would prefer my son to be dead than gay.’  A discriminatory sentence that we’ve been hearing for centuries in Brazil from North to South”. Socially the situation demands particular attention at the moment, according to Mott. Not even the irrational Inquisition in Brazil condemned homosexuals to death, he warns. Today by contrast, news reports about murders of people who don’t conceal their sexuality are no longer a rarity.