Circumcision, Judges and the Law. An interview with Ilhan Ilkiliç 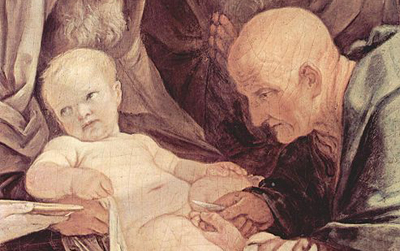 The Circumcision of Jesus, detail; Guido Reni about 1635-1640, photo: public domain
In June 2012 the Cologne District Court judged the circumcision of boys to be a form of bodily harm. There ensued a heated debate about religious freedom and physical integrity, religious tradition and civil society. Meanwhile the Bundestag has passed a law on circumcision according to which it is allowed in compliance with medical standards. Goethe.de talked about all this with the doctor and Islamic scholar Ilhan Ilkiliç

Dr. Ilkiliç, what was your experience of the now already somewhat dated debate in Germany about the verdict of the Cologne District Court against circumcision?

The polemical and polarising tone in which it was carried out was an unpleasant surprise. It was less about the actual subject than about a fundamental opposition. The one side was soon swinging the Holocaust bludgeon, the other saw nothing but pre-modern barbarism. I wouldn’t have expected such a reaction in the enlightened German scene.

Enlarge
In retrospect, do you see reasons for this?

Obviously fundamental, already pre-existing, tensions between religions and world views were projected onto this issue. For example, I gave an interview on the Internet that within a short space of time was commented on eighty times – unfortunately, the majority of the comments were openly xenophobic and racist.

Is the law on circumcision that has now been adopted by the federal government a viable solution?

I think so. Especially from the Muslim point of view, one can live with it. There is, however, a special provision for the Jewish community. According to this provision, the circumciser, if he is not a doctor, may circumcise infants less than six months of age. This clause is not really justified either legally or medically. The law is all about maintaining the highest medical standards, including professional pain avoidance; on this point there shouldn’t be any difference between a six-day-old infant and a six-year-old child.

Will the debate and the law change the Jewish and Muslim practice of circumcision?

Probably not. Even before, circumcision was paid for privately by the parents, and this will remain so unless there is a medical indication. The hygienic and medical standards are now secured. I don’t think this will lead to the circumcision tourism feared in the case of a ban. Second and third immigrant generation parents welcome the prescribed standards; they will therefore often prefer to have circumcisions done here than in their country of origin.

You are now teaching in Istanbul. Is there a similar discussion in Turkey?

I followed the coverage in the Turkish media during the debate in Germany. Their response was unfortunately a mirror image of the one here, just as unobjective and polemical. They simply took the verdict of the Cologne court as a proof of how anti-Islamic Germany – and Europe as a whole – is.

Even amongst my colleagues I’ve found little understanding of the debate, simply because they take male circumcision for granted. I, however, take the legal argument that circumcision always constitutes a violation of physical integrity quite seriously. You have to be aware of the problem and its solution. If I explain the issue in this way, I meet with a good deal of understanding. But neither the Turkish nor the German tabloid press is interested in such distinctions.

Dr. (TR) Dr. Ilhan Ilkiliç is a doctor, philosopher and Islamic scholar. He was a lecturer at the Institute for History, Theory and Medical Ethics at the University of Mainz and is currently an associate professor of the medical faculty of the University of Istanbul.
Gregor Taxacher
conducted the interview. He is a theologian and works as an editor for the West German Radio and as a freelance writer (emphasis on Christianity, Judaism and Islam). He lives in Cologne.