DiversMbassy – Diversity as an Opportunity 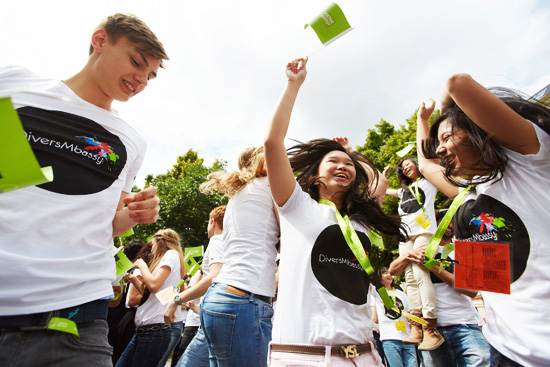 How can social diversity be of benefit in the workplace? The Goethe-Institut has launched a unique project to answer this question. Starting in October 2013, it brings together young people from 10 countries around the world – Spain, Romania, Netherlands, Germany, Indonesia, India, China, Cameroon, Lebanon and Jordan – to discuss diversity policy. Lebanon is used as a reference case to highlight the project and its outcomes.

Nearly 100 young people applied to participate in DiversMbassy, part of the PASCH: “Schools: Partners for the Future” initiative. A two-day workshop hosted by the Goethe-Institut in Lebanon in late April 2014 brought together the 30 strongest candidates from Year 10 and Year 11 to explore all the “diverse” opportunities that diversity has to offer.

The Workshop was supported by some high-profile guests. There was a lively discussion with Angelina Eichhorst, Ambassador and Head of the EU Delegation to the Lebanese Republic, and a conference call with Bashar Kilani, CEO of IBM Dubai. Till Heene, Lufthansa’s General Manager in Lebanon, explained the important role played by diversity management in Lufthansa’s corporate culture. The project has done much to overcome entrenched stereotypes. Rabih is enthusiastic: “I would never have thought that men could stay at home and look after their children. I think that’s great!”

Diversity Week in Berlin: workshops and internships with global players

At the end of the two days, the nine finalists were selected. They now had an international trip to look forward to in June: a visit to Berlin to join 85 young people from around the world and explore the topic of diversity in all its dimensions.

Highlights of the visit included mini-internships with international companies such as Bayer, professional services provider KPMG, IBM Deutschland and the SRH Hochschule Berlin. For three whole days, the students were able to gain an insight into diversity management as practised by some of the world’s leading companies and universities. “It’s incredibly interesting. It’s opening up completely new perspectives for me!” says 17-year-old Joe from Dhour Shweir after the first day of the internships, before falling asleep on the subway on the way home.

There was time and space to be creative as well. As well as the topic-related elements of the programme, the young people worked with a choreographer to produce the DiversMbassy Flashmob, with the song Timida, composed especially for the group, playing a key role. Our students’ performance at Hackescher Markt in the heart of Berlin surprised and delighted hundreds of passers-by.

To round off the programme, all the participants gathered for one last time at the Akademie der Künste, next to Berlin’s Brandenburg Gate, for a celebration of a successful week. “As soon as I heard about the project, I was very keen to be involved. We need more of them!” enthuses Uta Menges, Diversity Manager at IBM Deutschland.

The feedback from the young people themselves is positive as well. “My father won’t believe what I’ve done in just a week in Berlin,” said Amir, in tears as he said goodbye to his new friends.

More to come: Career Days at the Goethe-Institut in Lebanon

Sustainability is a key issue for all the projects run by Germany’s cultural institute and the PASCH initiative, so the 30 students from the first DiversMbassy Workshop are now invited to attend the Career Days in late September 2014.

The topic links in with Berlin’s Diversity Week. The young people will explore a range of career-related issues: How do I write a good job application? How can I study in Germany? What are my strengths and how can I use them?

Once again, representatives of leading international companies and organisations will be on hand to discuss these and other issues with the young people. “Diversity will play an important social role over the next few years,” says DiversMbassy project manager Alexander Kruckenfellner, “and the Goethe-Institut will of course keep its finger on the pulse.”
Johanna Klauke
ist a staff member of the Goethe-Institut Libanon.

Any questions about this article?
Please write to us!