Koreans have been part of German society for decades. 2013 is the fiftieth anniversary of the labour recruitment agreement of 1963 between the Federal Republic of Germany and South Korea. 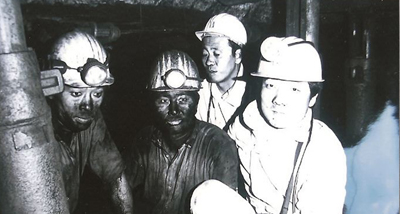 Korean miners in the mine Merkstein (Herzogenrath) © Union of Miners and Nurses dispatched to Germany and Professor Kwon
The beginning was hard. The first two hundred Koreans came to Germany as miners. Some 8,000 others had followed them by 1977. They were mainly students and employees, highly skilled men who were not accustomed to the heavy work underground. During the same period South Korea also send 10,000 young women who were needed in Germany as nurses. All, both nurses and miners, came over as guest workers; there was a strict obligation to return. Three years and their stay was over. This rule applied up to 1980. Only then did it become possible for Koreans in Germany to look for other jobs, take some sort of retraining and plan a secure future in Germany.

The immigrants from the Far East made a significant contribution to maintaining the German mining industry in the 1960s and 70s. The Ruhr area did not have enough workers; the existing workforce was too old. And the Korean nurses, without whom it soon became impossible to imagine the functioning of many clinics, were very welcome. Many of these young women saw in this work a chance to escape the poverty and lack of opportunities in their own country. At the beginning of the 1960s South Korea, still suffering the consequences of the Korean War, was grindingly poor. Here too was an important motive of the South Korean government: it counted on the young expatriate workers to bring foreign currency into the country. In this way President Park Chung-hee, who ruled South Korea with a dictatorial hand, sought to push ahead the economic development of the country. South Koreans also worked in Saudi Arabia or served on the American side in the Vietnam War.

Enlarge
The establishment of friendly relations between the Federal Republic of Germany and South Korea after the Korean War of 1950-1953 served their common strategic interests: the containment of Communism and the cooperation with the United States. In the 1960s and 70s Germany contributed to a considerable degree to creating the basis for the Korean economic miracle. Korea, one of the poorest countries in the world in the 1950s, developed into today its eleventh largest economy. The common circumstance that both Germany and Korea were divided countries made the two states into “distant fellow sufferers”, as one commentator wrote. Their relations remained stable even when the South Korean military dictatorship brutally cracked down on the opposition and suppressed the democratization movement in May 1980 by force.

It was different in North Korea: if a few hundred students and professionals were trained in East Germany in the 1950s, the growing tensions between Moscow and Peking in the 1960s and 70s led to an extensive withdrawal of North Koreans from its socialist “sister country”. In the conflict, Pyongyang stood on the side of Mao Zedong; East Germany on that of the Soviet Union. All the same, according to official estimates, about 1,500 North Koreans who came to East Germany before reunification still live in Germany, Martin Hyun, a German-Korean, writes in his book Lautlos – Ja Sprachlos – Nein: Grenzgänger zwischen Korea und Deutschland (i.e. “Silent – Yes Speechless – No: Border Crossers between Korea and Germany”).

Today, therefore, altogether around 50,000 people with Korean roots live in Germany. They live predominantly in the Rhine-Main area, in Düsseldorf and in Berlin. Education has been the key to their social success; they are regarded as very disciplined and ambitious, have achieved a certain level of prosperity after one generation and fit perfectly into their German surroundings.

Enlarge
Yet they live more or less “among themselves”, criticizes Martin Hyun, a German-Korean. “They often go to a Korean church, watch Korean soap operas, read Korean newspaper published in Germany, have their hair cut by Korean hairdressers and also do other everyday things without using the German language.”

Hyun was born in Krefeld, the son of Korean guest workers. He was the first ice hockey professional with a Korean background, studied politics and international law at an American university and is active as an inter-cultural ambassador. His criticism is aimed at the idea of integration: “In Germany, integration seems to be regarded as successful only if you remain silent, invisible and uncritical towards the majority society”. He thinks Germans lump together all “Asiatics” anyway and know very little about the small Korean minority in their midst. They are also hardly aware of the political dimension. For example, he points out that Korean associations were invited to the integration summits of the Federal Government only at the express insistence of their representatives. In contrast to the celebration of the 50th anniversary of the German-Turkish labour recruitment agreement, that with Korea has hardly been noticed.

One reason for this may be that South Korea’s image in Germany has long been that of a co-equal industrial nation. Germans drive Hyundai and Kia, buy televisions from Daewoo and LG, and telephone with mobiles from Samsung. Koreans play in bundesliga football and disco denizens dance in the Gangnam style invented in Korea.

Germany is the third largest investor in South Korea; 300 companies are directly represented on the Asian peninsula. German and German-Korean companies employ over 80,000 Korean workers. This also influences the image of Koreans who live today in Germany. They may have come as guest workers and started in deplorable conditions, but they now belong, like Americans, Canadians and Australians, to the group of established immigrant foreigners. They are identified with the standard of life that they enjoy in the home countries.

A small travelling exhibition with photographs by Herlinde Koelbl, 50 Years of Korean Miners and Nurses in Germany, in the art gallery of the Korean Cultural Centre in Berlin, shows their history. Others stations of exhibition will be Bochum, Dortmund, Goslar, Duisburg and Frankfurt.

Volker Thomas
is a journalist based in Berlin and head of the agency Thomas Presse & PR.