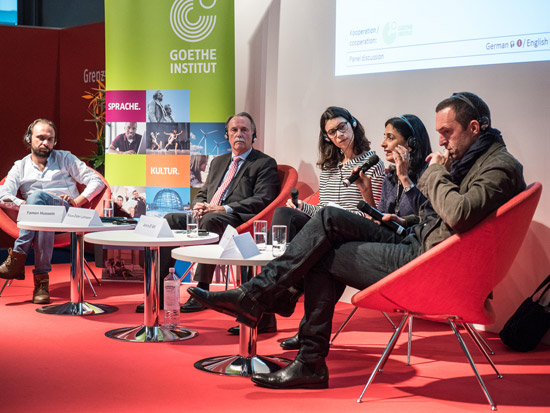 A Goethe-Institut panel discussion at the Frankfurt Book Fair explores the question of what art and culture have to offer in light of flight and displacement.

“How can art and culture be helpful for refugees?” was the opening question as worded by moderator Amira El-Ahl at the panel discussion on 16 October between Goethe-Institut president Klaus-Dieter Lehmann, the Egyptian arts activist Basma El Husseiny, the poet and playwright Albert Ostermaier and the Syrian journalist and author Yamen Hussein.

At the beginning of the conversation, Basma El-Husseiny, founder of the NGO Action for Hope, and Klaus-Dieter Lehmann described a number of approaches and projects that employ culture and art to support refugees. They do not aim to amuse and entertain, but to use the means of art, theatre and film to help process, relate and convey what the people experienced during their flight.

El Husseiny described how the cultural relief convoys of Action for Hope in the camps of Lebanon are based upon two premises: first that the emotional vacuum that is created when people lose their homeland, their living environment and are forced to flee cannot be filled by material aid. And since the vacuum is of an emotional nature, artists are those who can best offer remedies because their work always has to do with human feelings, dreams and stories.

Klaus Dieter Lehmann spoke out for a definition of cultural aid that does not involve showcasing cultural events coming from outside the camps. Instead, it should give refugees opportunities to employ their own creative powers like that in a Goethe-Institut film workshop in Amman in which German and Syrian directors work with children to process and film their experiences of violence, civil war and the fear of death.

When asked whether and how he thinks cultural work in the refugee context is a good idea, the Syrian journalist and author Yamen Hussein interjected that art has always played a role in resistance to oppression. Even today, art in Syria is highly significant, even in regions controlled by Islamic State.

But more fundamentally, Hussein argued that the debate over Syria should not be reduced to merely an issue of flight and refugees. After all, refugees are always more than just refugees, even if they are currently primarily perceived as such.

This theme raised by Yamen Hussein addressed a significant point in the current debate over refugees. The panellists agreed that it cannot always remain a policy of generosity, but rather that the new Germans originating from Syria be regarded as equal citizens, which would lead to a policy of participation.

The Munich-based writer Albert Ostermaier asked the question, “How do artists react to the refugee crisis?” Ostermaier first described an “existential experience” in refugee camps in Lebanon, where each and everyone has a story worth telling. These stories in part inspired the Forum:Autoren curated by Ostermaier at this year’s Munich Literature Festival (18 November - 6 December), which he called front:text.

Ostermaier also spoke about how he and other cultural professionals experienced the arrival of the thousands of refugees in Munich and how they were welcomed. “What happened in Munich,” Ostermaier said, “is something that moved me very deeply,” it was “an experience of import and endowed with meaning and congress as no one would have thought possible.”

Other cultural professionals felt the same and in the end, they switched the wording of the opening question: no longer to deliberate about what art can do for the refugees, but what are the refugees capable of doing for art? And for what will culture one day have the refugees to thank?