Integration is also decided on the employment market. The new offering Virtuelle Entdeckungsreise in die deutsche Arbeitswelt (Virtual Journey of Discovery in the German Working World) on the Goethe-Institut’s web portal Mein Weg nach Deutschland provides orientation for new immigrants on their start in the complex German vocational world, thereby contributing to more participation in society. It was now presented at a conference in Munich.

How do I get my foreign degree recognised? Should I have the vocational training I acquired abroad recognised? Can I study in Germany? Is it worth it for me to start an apprenticeship?

These are important questions for people who newly arrive in Germany. At the two-day conference Mein Weg nach Deutschland - Integration in Alltag und Beruf on 27 and 28 November in Munich, around a hundred people from academia, practice and politics discussed how arriving in Germany and participating in society can be successfully managed. “For the Federal Republic, the topic of integration is of central importance,” said Johannes Ebert, CEO of the Goethe-Institut. “With its expertise in international cultural and educational work, the Goethe-Institut is one of the most important players in the integration of immigrants.”

Johannes Ebert presented the new digital programme Virtuelle Entdeckungsreise in die deutsche Arbeitswelt (Virtual Journey of Discovery in the German Working World) as a tool for immigrants’ vocational orientation in their newly adopted home. With the help of the Journey of Discovery and other programmes such as informative graphs and language practise, immigrants get answers to important questions about getting started in their studies and work. 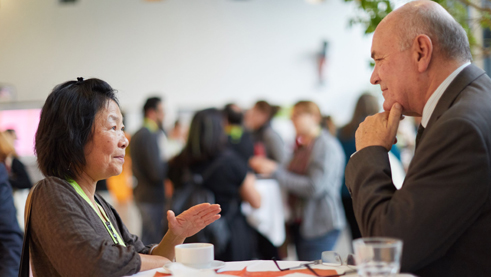 Users slip into the role of an advisor and accompany four avatars with real questions on their personal pathways in education, studies and work. In a playful way, they acquire skills in recognition of professional qualifications, admission procedures at universities and job opportunities for people without training.

“The Mein Weg nach Deutschland portal sets standards with its offers for preparing for linguistic and vocational orientation in Germany,” said Johannes Ebert. The web portal has both the target group in mind who want to inform themselves about opportunities in Germany while still in their home countries, as well as people who already live in Germany and now want to gain a vocational foothold.

For Anne von Oswald at the Immigration Office of the Integration through Qualification Network, the digital offer takes account of “changing consumer behaviour” among immigrants, who could become “digital multipliers” with the instrument. Thus, they themselves are doers, not recipients of aid, and can pursue their professional goals independently.

Integration is the all-important task

“Integration is the all-important task – if we can’t carry it off, we will have completely different problems,” said Kerstin Schreyer, the integration commissioner of the Bavarian state government, going on to note that all sectors of society have to work together on this task.

The participants in the conference emphasised that German society must continue to open up interculturally and that immigration needs to be seen as a lasting phenomenon. Part of this opening up is sensible language that invites immigrants to become part of society. What exactly is to be expected of the majority society and of the newcomers was also discussed vigorously in an open-fish bowl.

The second day of the conference was marked by various integration project sponsors who presented their diverse programmes in a hands-on marketplace. Here, the participants entered into intense conversations and developed new ideas for networking projects and common interests.

Above all, considerations of how the project sponsors’ many helpful and very well implemented products can reach the target group were the focus. Because immigrants often do not know enough about the programmes developed for them. The conference participants were of the unanimous opinion that there can never be enough networking, both between the actors and between the individual programmes and with the target group itself.


The Mein Weg nach Deutschland portal was developed and implemented between 2012 and 2014 by the Goethe-Institut. It was co-funded by the European Integration Fund. Since 2015, the portal has been further expanded during a second project phase with funds from the Asylum, Migration and Integration Fund.