The ‘Framework Curriculum for Integration Courses – German as a Second Language’ is a comprehensive recommendation for the aims and content of integration courses for immigrants. Language experts at the Goethe-Institut were heavily involved in developing these learning aims. The topic of migration is undoubtedly a rediscovery of the second millennium, at least for a country like Germany, which has not wanted to admit to being an immigration country for decades, despite a reality that is clearly characterised by immigration. Since the immigration law came into force in January 2005, this phase has definitely been a thing of the past.

As well as stating the conditions for immigration, this law also stipulates the framework for the rights and obligations of promoting integration. That is, those of the host society and those of the migrants. The law requires that migrants are encouraged to integrate in terms of social participation and equal opportunities and stipulates the establishment and attendance of integration courses that consist of a language course for German as a Second Language as well as a so-called orientation course.

Decades of experience with German as a Second Language

Even if extensive practical and theoretical expertise has been gained in connection with Germany’s 40-year migration history, which could and can be drawn on, the issue of integration that is linked to the immigration law is again becoming a central issue that must be systematically answered with forward-looking suggestions. The ‘Framework Curriculum for Integration Courses – German as a Second Language’ that the federal office commissioned the Goethe-Institut to develop must be seen as one of the central components of such forward-looking provisions. 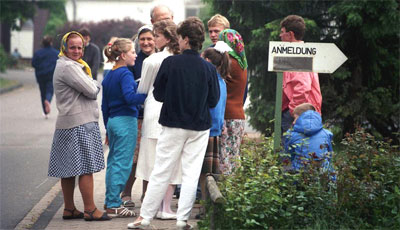 Immigrants in the Friedland reception centre in 1988, a family from Tajikistan.
© The German Federal Archive
For thirty years, the Goethe-Institut has been commissioned by the Federal Ministry of Labour and Social Affairs to provide training for course leaders of language courses for foreign employees. Based on this experience, in autumn 2006 the Federal Ministry of the Interior commissioned the Goethe-Institut to develop a framework curriculum for the integration courses and a . The new language examination system aims to provide tiered and therefore differentiated proof of language competency. The language examinations form the end of the integration courses, which are supported by the federal government. However, German language skills can be tested without attending a language course.

One of the key requirements that the framework curriculum must meet is its adaptability for very different target groups. On the one hand, there are new immigrants, on the other, the curriculum is also tailored to so-called ‘old immigrants’, meaning people who have lived in Germany for a long time, some for decades.

As these two target groups have very different needs in terms of linguistic and everyday integration, the phrase ‘squaring the circle’ comes to mind as the aim for the requested curriculum. One only has to be shown a few ‘prototypes’, such as the highly qualified IT technician who has recently immigrated from India, the wife immigrating from Belarus with her family and the Turkish worker who has been living in Germany for 20 years, is now unemployed and is improving his language skills through qualifications, in order to be able to imagine the complexity of the task.

A milestone for linguistic integration

The development team set themselves the task in the sense of ‘approaches’ and focused mainly on the following pillars of a framework curriculum for a high-quality learning opportunity:

The extent to which an offer that satisfies the practical requirements and also takes into account the status of the discussion has been able to be made, will be determined by the future and the response of readers and users from science and practice. However, the framework curriculum definitely offers an orientation that sets an important milestone for the further development of teaching programs for the linguistic integration of immigrants. An important milestone – which is only the starting point.
Dr Hans Barkowski,
Friedrich Schiller University of Jena