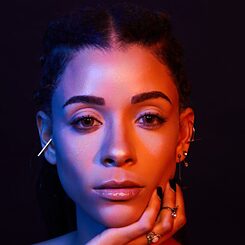 © Simonne Jones About Berlin transplant Simonne Jones: Peaches is her mentor. Jared Leto is a fan and so is Jean-Michel Jarre, who sent her to live with an indigenous tribe in the Amazon. She's modeled for high-end fashion events and composed for German theater. She's conducted magnetic resonance imaging studies on mutated HIV cells and engineered computerized paintings integrating science and music featured in galleries in New York and Berlin. She taught herself the piano at age 10. At 15, she successfully petitioned the Los Angeles courts to be home-schooled; one year later, she enrolled at the University of Maryland. Her upcoming album incorporates the synthesized sounds of actual stars, artificial intelligence, physics themes and pitch-shifting conspiracies.