Sustainability in the Favelas Bottom Up, Not Top Down

Overlooking the favelas of Ipanema on one side, with Cantagalo and the lagoon on the other | Foto (Detail): © CatComm

Forget about the prejudices: poverty, filth and criminality – a project in Rio de Janeiro has created a network for various initiatives in the favelas that are attempting to make their neighbourhoods greener and more social.

“It’s all about networking”

“A sustainable sewerage initiative from the northern zone, a reforestation programme out in greater Rio, an eco-museum in the western zone, a recycling initiative from the central zone,” – Clara Ferraz lists some of the sustainability projects in Rio de Janeiro. A few years ago they weren’t really aware of each other. The Sustainable Favela Network is trying to change that. For the past three years Ferraz has worked for the Brazilian Catalytic Communities, the organisation that stewards the network. She studied environment studies, so she feels especially committed to the project.

She’s a bit late for the video interview since she was still working. At first there are problems with the internet connection, but then it’s sorted. Even before the pandemic she did most of her work digitally. She coordinates the scheduling of presentations, group meetings, or the communication with event venues: “It’s all about networking.” 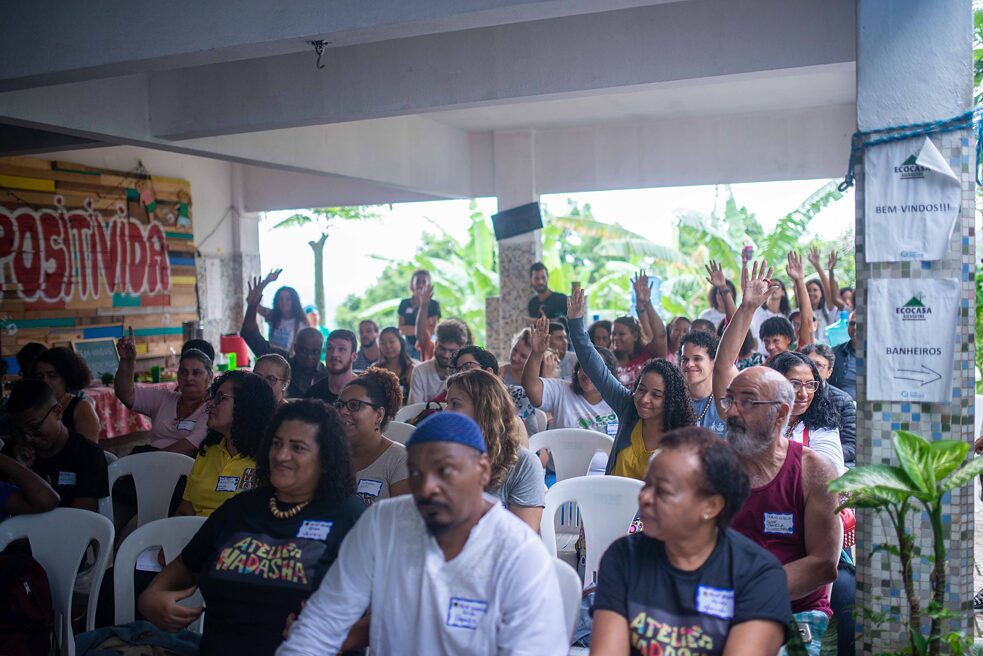 The Sustainable Favela Network holds exchange events at which network members from all over Rio can engage and connect in relation to their work initiatives. | Photo: Thiago Dias © CatComm The Sustainable Favela Network was set up in 2017. For their first major project, they developed an interactive map of Rio showing the local environmental organisations. From this, they developed different exchange formats and meetings that really fostered the communication between the projects. Ferraz, for instance, recalls a workshop organised by a zero waste initiative, whose mission was to prevent the production of waste in food preparation. “We would have people from all different types of backgrounds.” In 2020 the network’s online meet-up had 120 participants. Regular exchanges are held in working groups, covering a variety of themes such as water supply, solar energy and sustainable education.

Bringing the Favelas Together

“We’ve never been as busy as we were last year,” reports Dr. Theresa Williamson. She is the founder and Executive Director of Catalytic Communities in Rio de Janeiro, where she works and lives. She’s currently in the USA, but that’s irrelevant since the entire world is only able to meet on screen at the moment. She speaks quickly and clearly: “We identify people in the favelas that are doing important work, and then we see how we can help them. Very simple.” The organisation – which has set itself the goal of bringing together and supporting initiatives and projects from the favelas in Rio – has been around since 2000. 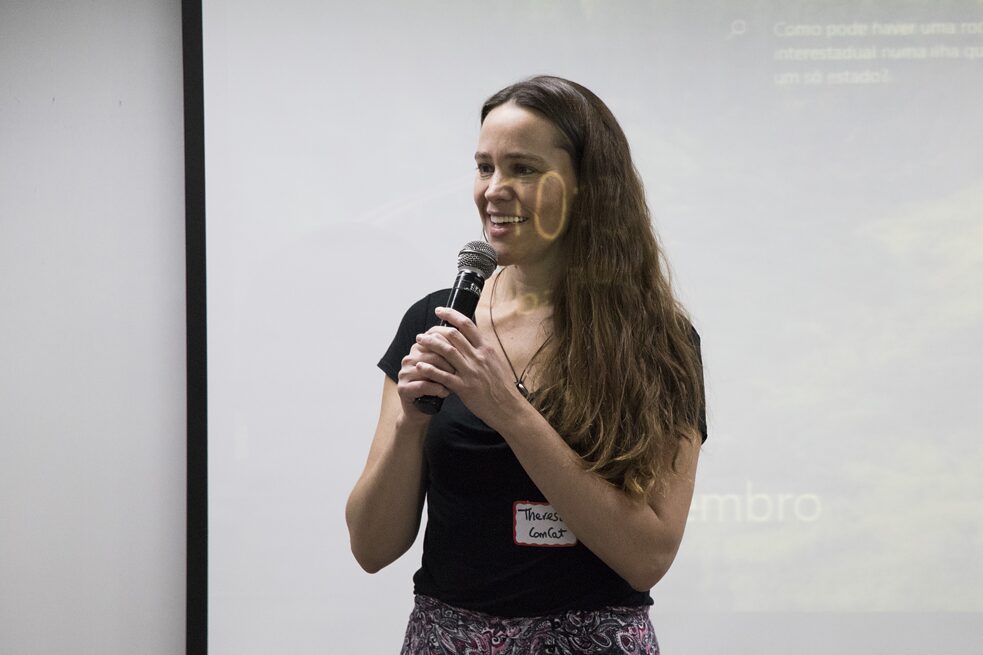 Theresa Williamson in front of members of the Sustainable Favela Network | Photo: Antoine Horenbeek © CatComm Catalytic Communities views its relationship with people from the favelas as a dialectic exchange. “We are all moving towards the same goal, which is the development of these communities and full integration into the city,” says Williamson. At the same time, it’s important that the favelas retain their independent characters and creative dynamics.

23% of Rio’s citizens live in favelas: informal settlements, that are frequently referred to as slums or shantytowns due to the lack of an appropriate translation. Yet the word “favela” is actually the name of a robust floral bush common in the Northeast of Brazil – which gave its name to the first settlement. The first favelas started out as communities of Afro-Brazilians towards the end of the 19th century after the abolition of slavery in Brazil. 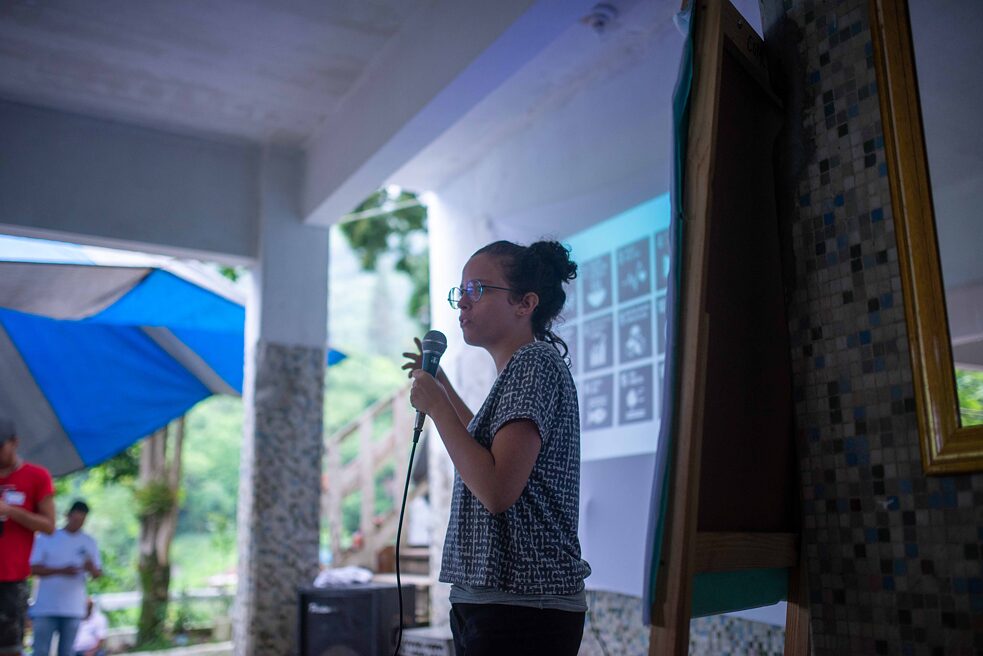 A Biodigester for the Whole Neighbourhood

One of the projects supported by the Sustainable Favela Network is particularly dear to Ferraz. One of the smallest favelas is Vale Encantado – the enchanted valley – and it’s surrounded by the forest on the outskirts of the National Park in the centre of Rio. “They suffer attacks from people saying that they are encroaching and a hazard to the forest and the biodiversity,” explains Ferraz. “when in fact there are mansions around them posing a greater problem.” For this reason, the municipal authority is attempting to get rid of the Vale Encantado residents. In order to demonstrate that – contrary to the accusation – they actually play a key role in the maintenance of nature, the residents started up sustainability projects. Two biodigesters were set up to ensure that the community could be self-reliant. One of the digesters takes the waste food from the community restaurant, which is run by a cooperative comprising several families. The co-op is developing new recipes based on the jackfruit, which grows wild in Vale Encantado. The biodigester also generates methane gas from the waste to power the stove on which they cook the food. The other digester is connected to the sewerage system – the plan is that the wastewater management scheme will soon meet the needs of the entire community. 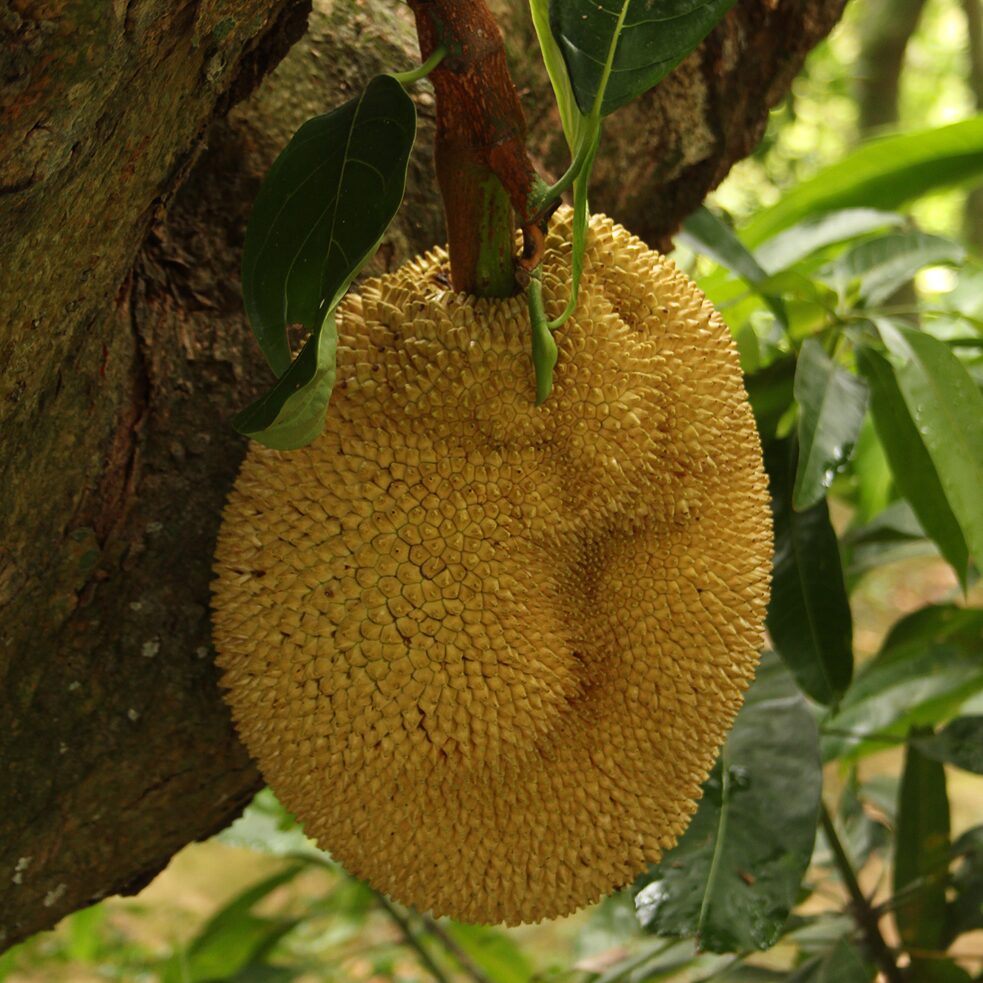 The nutritious jackfruit grows wild in Rio de Janeiro. | Photo: © CatComm
For the future, Ferraz hopes that the Sustainable Favela network's specific demands for more sustainable activity by the town will be put into practice. Next year they aim to become increasingly visible in the public domain, and involve the government: “So that they do their job right here. And really foster sustainable favela communities in a way that isn't top down but bottom up – the same way as our network.” 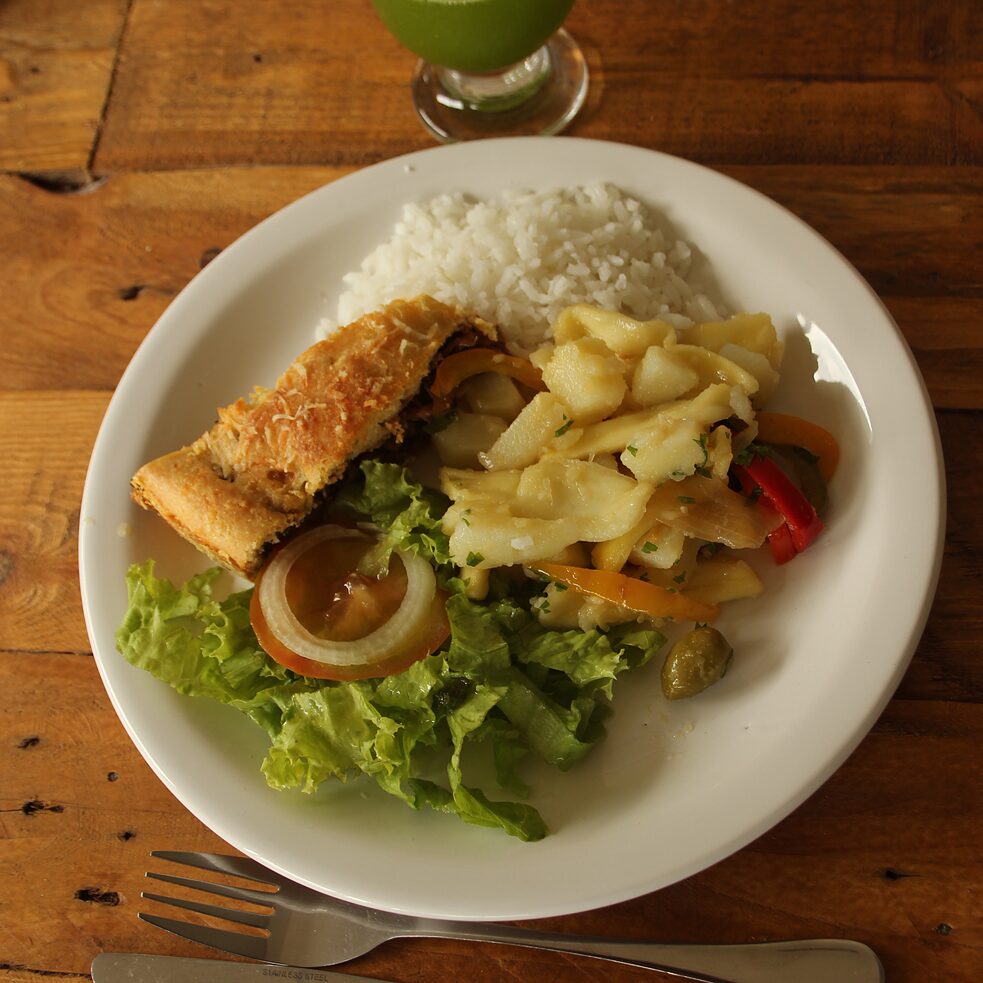 The residents of Vale Encantado prepare dishes made from jackfruit. | Photo: © CatComm

There are similar projects all over the world in which communities are linked together and encouraged towards self-empowerment. “The model lends itself to be replicated somewhere else, not entirely, but the elements of connecting and building trusting relationships with community leaders can be applied anywhere,” according to Ferraz. Williamson can also see great potential in supporting informal settlements: “Once they have become established, we need to improve the community and not remove it.” Catalytic Communities doesn’t view the favelas as a problem but as a creative idea machine that keeps on generating innovative and sustainable projects and solutions autonomously.

How Can the Urban Boom Become an Ecological Miracle?

All over the world cities are growing almost unchecked. Globally the urban population could almost double by 2050. This will involve traffic chaos, use of energy-intensive building materials like steel and concrete, displacement of ecosystems. Yet cities in fact have the potential to be exceptionally sustainable – because residents there are sharing infrastructure in a small space, which in turn saves resources and energy. In our feature stories on the subject of the urban boom, different authors look at three approaches and ask how urbanisation can be implemented sustainably.

Antonie Habermas is a member of the online editorial team at the Goethe-Institut head office.